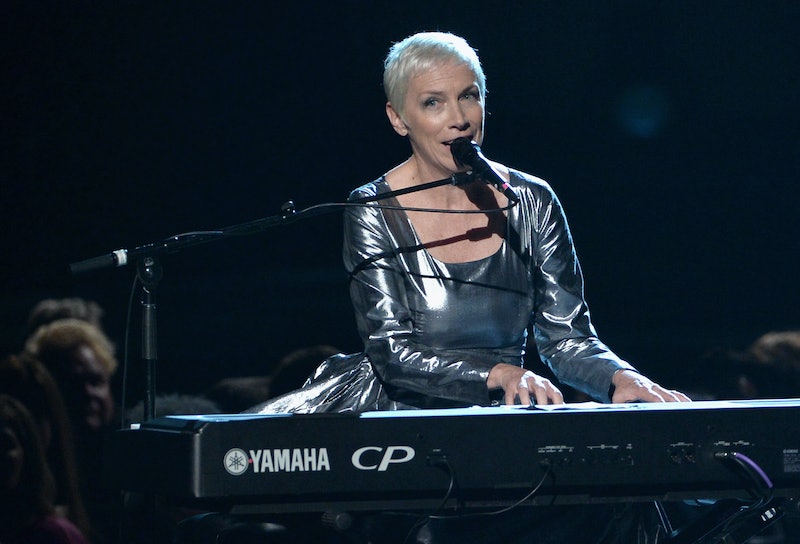 Sweet dreams are made of people ceasing to ask the question, "Is Beyoncé a feminist or not?" The latest Beyoncé skeptic is Annie Lennox of Eurythmics, who in an interview with Pride Source called Beyoncé's use of a FEMINIST backdrop in her MTV VMAs performance "feminist lite." She goes on.

The irony here is that Lennox is calling the performance a token, when Lennox herself is tokenizing Beyoncé. Cool move!

Unfortunately, Lennox is far from the first detractor of the Church of Bey. The "is she or isn't she" debate about Beyoncé's feminism are about as old as Beyoncé's career. Upon the announcement of her Mrs. Carter tour with Jay Z, originally billed as Me and Mrs. Carter, Marina Hyde from The Guardian berated Beyoncé for choosing to use her husband's surname, calling the choice "doublespeak": "This is possibly the least self-respecting thing an Independent Woman could call a double act." Hyde refers Beyoncé back to her OWN essay that she wrote for the The Shriver Report, in which Bey wrote:

Humanity requires both men and women, and we are equally important and need one another. So why are we viewed as less than equal? These old attitudes are drilled into us from the very beginning. We have to teach our boys the rules of equality and respect, so that as they grow up, gender equality becomes a natural way of life. And we have to teach our girls that they can reach as high as humanly possible.

Hyde believes that Beyoncé's use of her husband's last name contradicts all of her strong attitudes about feminism. She doesn't once consider the fact that it was Beyoncé's choice to use the name; and in its most simplistic form, feminism is about choice.

Lennox, too, thinks that Beyoncé, along with that of other young female pop stars, are "taking the word [feminist] hostage and using it to promote themselves, but I don't think they necessarily represent wholeheartedly the depths of feminism — no, I don't... I think it's a cheap shot. I think what they do with it is cheap and ... yeah. What can I tell you? Sex always sells." Resisting the urge to tear my hair out, I have to ask Lennox: Since when does taking control of your sexuality equate to being anti-feminist? Annie, do you exist in a vacuum where you guard the one ring of feminism to rule them all?

Lennox goes on in her interview:

But we need men to be onboard with us. That's my view. Some women might disagree with me. I'm not saying I hold the key to the absolute truth — I'm not saying that at all — but I also feel very much that the LGBTQ movement and the women's movement need to get together far more frequently because we're coming from the same place of human rights and civil rights.

Seems quite similar to Beyoncé's own words in The Shriver Report, so why does Lennox consider herself so much more enlightened? She speaks from her LBGTQ point of view and calls for unity, but she also totally eschews the fact that the same kind of understanding needs to exist between white feminism and WOC feminism, especially black feminism. There has to be an acknowledgement that feminism is not a monolith. This constant questioning of Bey's feminism is exactly the kind of frustration and ingrained discrimination that leads to many black women identifying as "womanists" rather than "feminists."

When considering why Beyoncé's feminism is so excruciatingly criticized, the answer seems uncomfortably obvious: because she is a powerful black woman. Other women, especially Emma Watson, are being hailed as feminist heroes, but even Watson questioned the singer's feminism, saying that Beyoncé was catering to a male gaze. That completely strips Bey of her agency. She couldn't possibly have made that choice, could she?

I'm petitioning to put a moratorium on the conversation on whether or not Bey is a feminist. For one, she has over and over identified as a feminist. What gives artists like Lennox the authority to rob Beyoncé of an identify she is claiming?