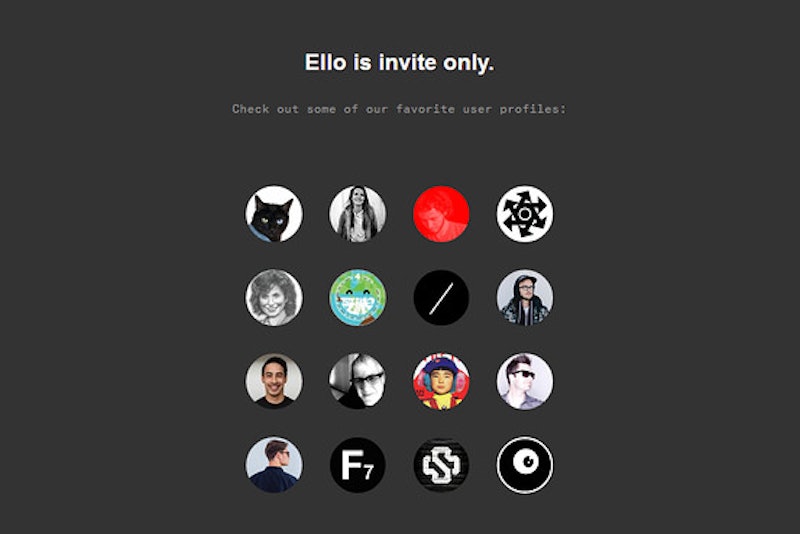 Last week we were introduced to Ello, the hip new social media site that has its own florid manifesto and was created by a bunch of dudes that I can only imagine have magnificent mustaches. The ad-free anti-Facebook has been praised for its beautiful, minimalistic design. The only problem with its simplicity? No one can figure out how to post to Ello.

That is, of course, if you can even get an invite. The site is still in its beta stages and is currently only inviting as many new users as it can handle. On Sunday the site experienced its first big stumble when it faced a denial-of-service attack, which took down the site for 35 minutes.

But the site's problems extends beyond technical issues. Despite the limited number of users with active profiles on Ello, there has been a surge in desperate tweeters who can't figure out how to navigate the site. So much for that simplicity thing, huh? Maybe Ello should add some instructions to the cheekily titled "wtf" page.

Having a simple way to post on the site, you know, the entire purpose of a social network, seems like it should be a priority for the designers, and apparently one that they didn't address.

Basically, there isn't really a post button at all. Simple a black box that says "Say Ello." If you click it, a dialogue box will appear and allow you to type out a status or upload a photo using fairly nondescript icons. If you click on the three dots on the bottom of right, you can comment; if you want to comment on another comment, you can hover over the little gray arrow on the bottom of that and hit the "comment" button.

One of those buttons happens to be the "post" button, but there's nothing to indicate that unless you hover over it. Rather, you just need to intuitively guess that the arrow means that your message will be forwarded to your friends and into the ad-free Ellosphere. As a savvy Twitter user pointed out, you can also post by hitting Command+Enter on Mac, or Ctrl+Enter on PC.

If you want to reply to your friends' posts it'll be easier if you've been on Twitter. Ello uses the Twitter-type handle (complete with the @ sign) to identify its users. When replying to a friend you use the username you've chosen on Ello with the @ sign.

It seems the exclusivity of Ello doesn't just lie in the invite-only model, but just in a "how the hell do I use this?" capacity. God speed, Ello users.