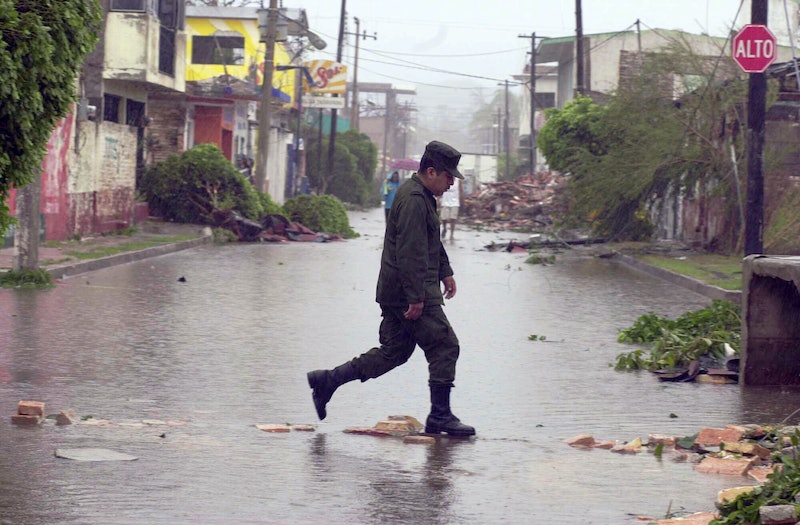 Tropical storm Fernand has begun to weaken into a 'tropical depression as it moves northwest Monday, having left a deadly trail behind it in the Mexico's eastern Veracruz state. (A tropical depression, by the way, occurs when a group of storms congregate for an extended period of time under certain atmospheric conditions to form one large storm.)

Tropical depression Fernando made landfall Monday morning from the Gulf coast, striking the country's easternmost region. Winds swept through the region at a speed of up to 35 mph, while torrential downpours left up to 12 inches of rain in certain parts of the country.

The real danger, however, was posed by the massive mudslides that buried several homes throughout the region, killing 13 people. According to Veracruz's Governor Javier Duarte, nine of the people killed were in the town of Yecuatla, three were in the city of Tuxpan, and one in the town of Atzalan. The governor's office declared a red alert in the north and central regions of the state, and ordered over 200 homes evacuated as emergency services moved into the area. The other 7.7 million Veracruz residents were advised to stay in their homes.

Concerns that the storm would harm oil and gas installations run by the state-owned monopoly Pemex were alleviated when the storm continued north, missing the facilities located farther south.

Mexico's hurricane season lasts from June through November, though the worst storms tend to hit in September and October. At their worst, hurricanes in Mexico can reach wind speeds of up to 155 mph.

More like this
What To Know About Martin Bashir After Watching 'The Crown'
By Bustle UK
'Waterloo Road' Is Back, With More Than A Few Familiar Faces
By Sam Ramsden and Vivian Iroanya
Mollie King & Stuart Broad Just Shared The First Pic Of Their Baby
By Sophie McEvoy
Kendall Jenner & Devin Booker’s Relationship Timeline From Start To Finish
By Jordyn Tilchen and Jake Viswanath
Get Even More From Bustle — Sign Up For The Newsletter