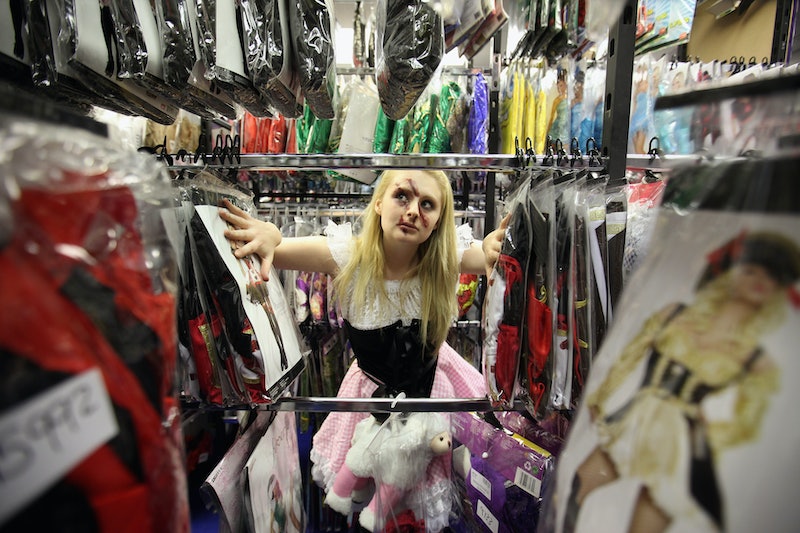 Everybody knows that on Halloween, the way to the cool kids' hearts is not through artisanal chocolates or homemade honey wine or references to obscure Druidic traditions. The cool kids are not charmed by the way you pretentiously refer to the holiday as “All Hallow's Eve” or even, gag, "the triduum of Allhallowtide." Looking cool on Halloween is deceptively simple: You just gotta dress up as a literary character. The man who comes as Gatsby will have his pick of the Daisies, so to speak, while the woman who slinks around as Anna Karenina will earn the respect and fear of all involved, especially anyone dressed up as Thomas the Tank Engine.

When opting for a literary costume, the point is not to be trendy, but to be classic, richly imagined, and a little bit pretentious. (Why deny it?) After all, by dressing up as something literary, you're announcing to the world that you're a reader, bro. You read words. On pages! Sometimes multiple pages in a row! You might try to hide your aura of intellectual superiority during the other 364 days of the year, but on Halloween, it's time to let your (unbearably pretentious) freak flag fly.

You're into writing that's funny, sad, and a little bit ironic — kind of like your memoir, now that you think about it. You should totally dress up as:

We all know the type: It's a “passion project” for two bros straight outta their MFA program, it's titled something unbearable like the Neon Pigeon Review, and they forgot to hire a proofreader. Write the title on a piece of cardboard, strap it to your chest, and fasten the back cover, riddled with typos, to your back. Refer to shots as “submissions," and accept them all.

Reference Roxanne Gay's new book of essays by wearing pink, tucking every Sweet Valley High book you can find under your elbow, and fastening your “Raging Feminist” pin next to one that says “I Love Men.” If people misinterpret your costume as failed feminist or uninformed human being, make sure you've read Gay's eponymous essay so that you can set them straight.

Guy in Your MFA

If you haven't read the hilarious "Guy In Your MFA" Twitter account, absorb its wisdom — call it character development — then stick a beanie onto your head and a copy of DeLillo under one arm and go forth boldly to tell the publishing world about your 20-something protagonist whose empty refrigerator is a metaphor for his empty life.

You love literature that's pretentious and obscure, and you don't even know what that book 50 Shades of Greyscale or whatever is, so don't even ask, you just have no idea. You should totally dress up as:

"Oh, you didn't know Chekov owned and was obsessed with a mongoose? How embarrassing for you." — your go-to pick-up line.

Jonathan Franzen famously hates Twitter, and if you print the above screenshot onto a white shirt, everyone normal at the party will hate you!

It's the magazine for literati bros, by literati bros. Dress like a literati bro — or simply tattoo an "evocative" one-word headline onto your forehead.

Fish as a metaphor for mother

If you haven't read Faulkner's As I Lay Dying, you'll never truly get it, but suffice it to say that one entire chapter famously reads "My mother is a fish" and that — actually, never mind, I have to go talk to the guy dressed up as Jonathan Franzen's non-existent Twitter account.

Godot from Waiting for Godot

He never arrived, meaning no one except his friends knows what he actually looks like, meaning this is the perfect costume for the lady or gentleman who would really just like to wear his or her pajamas all night. Also a good option for the dude who wants to dress up as Abraham Lincoln and then annoy everyone by insisting that he's not dressed as Abraham Lincoln, he's dressed as someone else, and he refuses to say who.

You fall somewhere on the creeper/psychopath spectrum and you'd prefer that your literary characters do the same. You should totally dress up as:

One of Poe's many dying wives

The man wrote plenty of them — from Bernice to Morella to Ligeia to the bride in “The Oval Portrait." They're all delicately beautiful, mysteriously ill, and have a disconcerting tendency not to stay dead.

The narrator of The Stranger

This guy may look ordinary, but the way he moves through life without expending a single feeling on anyone from his dead mother to the dude he murders on the beach is certainly chilling. Wear your regular clothes and stare blankly into the eyes of your friends when they ask you if you're okay.

Rhoda in The Bad Seed

Dress as the original killer kid and you'll put all those steampunk doll costumes to shame.

You like steamy romance novels and the feeling of being judged in public. You should totally dress up as:

Hester Pryne from The Scarlett Letter

Button your long, black dress all the way up to your chin, pin a scarlet "A" onto your clothing, and voilà! You're a 19th century ho!

She had "curves like the hull of a racing yacht,” so, you know, wear something tight.

Feel like moonlighting as the most charming, loathed womanizer of our modern literary times? Dress up as Yunior, the quasi-autobiographical Dominican boy who appears in all three of Junot Díaz's books and can't stay faithful no matter how much he loves a girl.

You prefer to read about star-crossed lovers and partners in crime, because life's better with someone by your side, though your therapist says you only feel that way because of that terrible day in middle school when your "best" friend left you for her "new" best friend and you had to eat lunch in the — never mind, but you should totally dress up as:

The Patches from The Beautiful and the Damned

This is your once-in-a-lifetime chance to wear flapper clothing, throw back multiple bottles of champagne, make plenty of poor life decisions, and laugh in people's faces when they ask if you're dressed as Daisy and Gatsby.

Make sure your Charlotte Haze is sort of floridly pretty and desperate for love; make sure your Humbert Humbert ignores her all evening to stare at anyone dressed as a schoolgirl.

All you need is two white shirts, a Sharpie, and a willingness to be defriended on Facebook by all your non-literary friends.

Gibreel Farishta and Saladin Chamcha from The Satanic Verses

While everyone else is dressing up as basic angels and devils, you and a pal should dress up as actors who have been magically transformed into an angel and a devil after a plane accident sends them catapulting into space and at first it's hard to tell if the transformation is metaphorical or — you know what, just read the book.