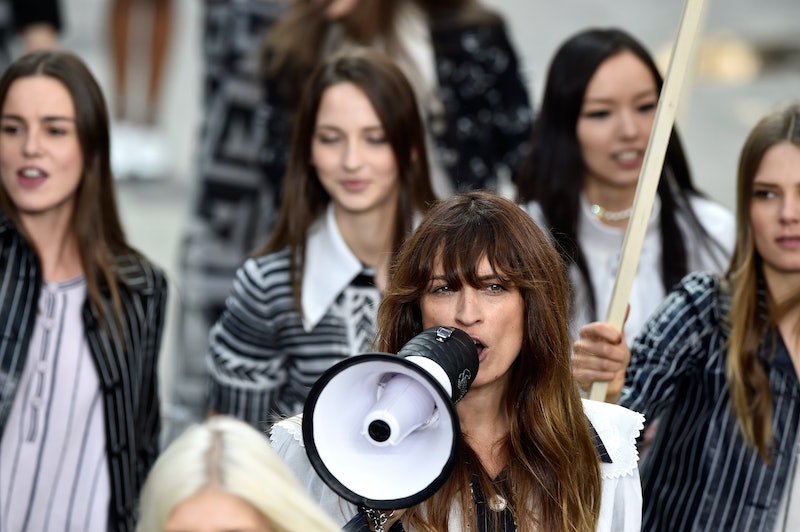 Feminism really is having a moment. Several of them, actually, and not in a trickled down, co-opted, empty sentiment way — you know, like saying "Girl Power," without any real meaning or power or desire for change behind it. Chanel incorporated feminism into its runway show in Paris in a major way, shifting the spotlight from the clothes (the beautiful clothes, I might add) to the notion of empowering women.

From Emma Watson delivering a gender equality speech at the U.N. earlier this month to Lena Dunham labeling her pal Taylor Swift a feminist in Rolling Stone for running her brand and business and writing her songs on her own terms to Annie Lennox calling Beyoncé's brand of feminism "lite," feminism, in all its forms, is as in vogue as it has ever been.

Chanel's Karl Lagerfeld enlisted supermodels Gisele, Cara Delevingne, and up-and-comer Kendall Jenner, or just "Kendall," for a feminist protest at his spring show at the Grand Palais Tuesday (Sept. 30). Each model can empower women in her own, unique way: Gisele is a modern mom of two; while Delevingne is helping to redefine beauty standards when it comes to models, as well as LGBTQ acceptance (remember when she probably-maybe dated actress Michelle Rodriguez earlier this year?); while Kendall appeals to the young, impressionable, and reality TV watching demo.

The show started with the models, dressed in the S/S 2015 garb, staging a silent protest. They all strutted to the music in killer couture. Typical runway activity, yes. But the showstopper was the actual finale, which saw women holding megaphones and poster signs bearing phrases like "Feminism Not Masochism," "History Is Her Story," and "Make Fashion Not War!" as Whitney Houston's "I'm Every Woman" blared.

The protest signs fused fashion and feminism in a thoughtful way, without feeling forced or tacky. The images are unforgettable and strong.

But the conversation doesn't end here. It merely starts here. If one of the most respected and storied brands in fashion can make this type of statement, let's hope it does trickle down meaningfully to the masses, like most runway looks do.

The clothes were of course fabulous, but it was really all about empowered women.