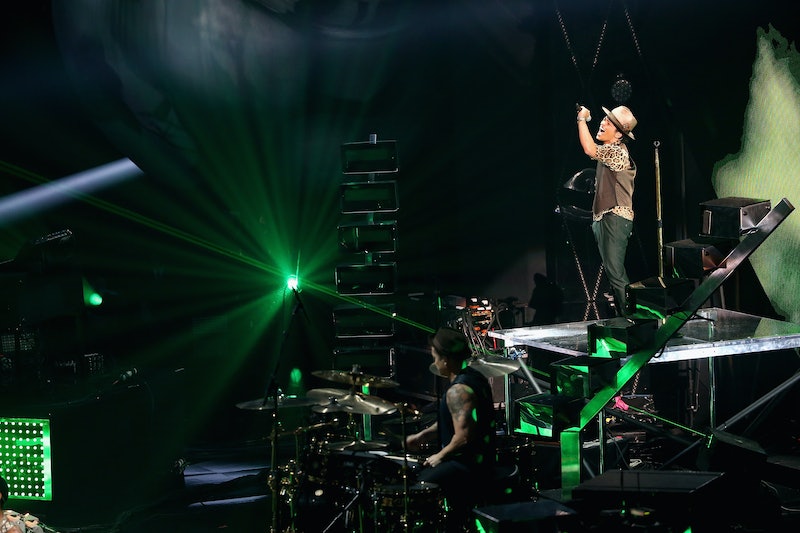 Sunday night's VMAs were a veritable shitstorm. Miley Cyrus' abominable performance inspired more tweets than the Super Bowl. Lady Gaga was a flying nun. Macklemore won for best hip-hop record?! We were served a lot of questions and very few answers. One nice, par-for-the-course moment, though, was Bruno Mars' performance of "Gorilla," right after he won the award for Best Male Video. It was a performance with high energy, great vocals, and lots of lights. Definitely not who Kelly Clarkson was referring to when she summed up the awards show with the hashtag "pitchystrippers."

Okay, so Bruno can work a stage. But... have you read the lyrics for "Gorilla?" They are downright nasty, not to mention a little bit creepy. Still, the song is fantastic, with its upbeat tempo and jazzy feel, but with lyrics like, "But in this jungle you can't run" and "If the neighbors call the cops, call the sheriff, call the SWAT we don't stop, we keep rocking while they knocking on our door" are more than a little off-putting. We know Mars is talking about rough sex, but does it get a little too rough?

Maybe I am just taking Mars too seriously (I never thought that would be something I'd say, believe me), but his performance is being heralded and no one is talking about the content of his lyrics. It's not necessarily that we have an issue with Mars' song — as we mentioned, it's fantastic — but why does he get a free pass while Cyrus only gets slut-shamed for her performance with Thicke? Two years ago, when Rihanna released "S&M," she was slammed for the controversial lyrics in which she expressed her interest and enjoyment of sex and sang about chains and whips, hinting at BDSM. The result? The music video for "S&M" was banned in several countries for being too sexualized.

So what's the difference between the lyrics of "S&M" and the lyrics of "Gorilla?" Not much, besides the fact one of their respective artists is female and one is male. Mars is a talented performer, but so is Rihanna (and, arguably, Cyrus) — that shouldn't excuse him from the criticism that female performers constantly face head on, especially when they are displaying a control of their own sexuality.

I can't say I am personally offended by Bruno Mars' "Gorilla." Perhaps because the singer is one of the most inoffensive out there right now. His songs are catchy (do you remember every word to the "Lazy Song?" I sure do, against my own volition), but he hasn't been in the spotlight for much controversy. Plain and simple, Mars is an affable guy who can write one hell of a song. But if we're going to talk about Cyrus' "We Can't Stop" and Rihanna's "S&M," shouldn't we be having a conversation about "Gorilla"?