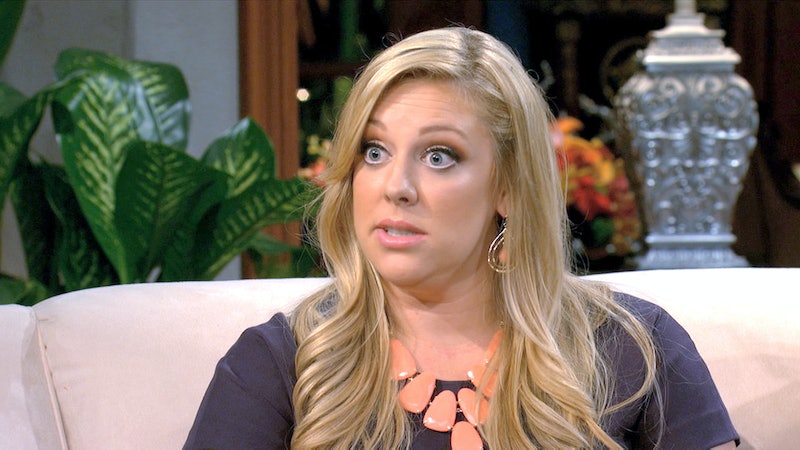 It's a good thing this season has finally -- or almost finally, considering next week's "Secrets Revealed" and the spin-off miniseries Tamra's OC Wedding -- come to an end, because they're really stretched at this point for stories to dredge up. At one point tonight there was so little to discuss that producers actually dedicated a segment to previewing that wedding special, with the housewives looking on in rapt attention. And I guess that's Real Housewives of OC in a nutshell: mirrors into mirrors, the watched endlessly cycling into watchers and back again. You thought this show was about shallow plastic surgery monsters?! Hahaha it's a performance art piece we'll one day be gazing at on the top floor of MoMA.

But it wouldn't be Bravo if there weren't something at least resembling a dramatic moment, and tonight's came in the form of a long-awaited (I think?) confrontation between Vicki's daughter, Briana, and Vicki's on-again-off-again (but now definitely off-again) boyfriend, Brooks. Let's break down the contenders:

The he-said-she-said of two people who aren't even full cast members is the definition of "who gives a shit" even on a show that weekly redefines the phrase, but because we've come this far: FIGHT!

Briana threw the first verbal punch as Brooks sauntered down the stairs. It was actually about punching, and it was a doozy. "YOU TOLD MY HUSBAND TO START HITTING ME?!?" Reacting normally for the first time all season, the Housewives were flabbergasted Brooks could have said that. Lydia left the room. In a cringeworthy moment, Vicki stepped in to defend her man, sort of. "He's never laid a hand on me. He's never touched me." Missing the point and reinforcing the wildly antiquated notion that so long as a man doesn't physically hit you, he's doing no harm? Yiiiiiiiiiiiiiiiiiiiiiiiiiiiikes.

Brooks countered by...admitting that sure, he said that. But, you know, guys get drunk sometimes and say stuff. Alcohol!

Sensing she had her opponent on the ropes, Briana opened up another line of attack, this one about Brooks' off-color boasts. "You called your penis 'Girth Brooks'," she leveled at him, as his faux-shocked look suggested that absolutely, he said that to her. (Again, COOL GUY.) Briana continued onto texts he may or may not have sent her mom negging her about her looks, weight. "You always say how pretty I look!?" Vicki cried out, in an exclamation that ended as a question. "You--you love the shape of my body!?" No one answered. I want to cry, too.

Andy, ever the mediator, summed it up for Vicki. "On one side is the love of your family. And the other is the love of your life." Vicki naturally broke down in tears at this horrifying assessment. Luckily, she also had the love (TM) of everyone in the room, who gathered around to console her. Brooks and Briana, not yet cooled down from their clash of titans, neglected to offer their support. I mean Vicki just knows, you know?

In the end, as had already been discussed with Vicki's "taking a break" comment earlier in the episode, it was Briana who won the smackdown. Surveying the wreckage as her opponent left, up the living room fake stairs and out into the blistering light of the studio lot, Briana smiled. Nearby her mother rocked like a baby as her Real Housewife friends moved to hug her. "I just want my family back."

"I just want my family back."