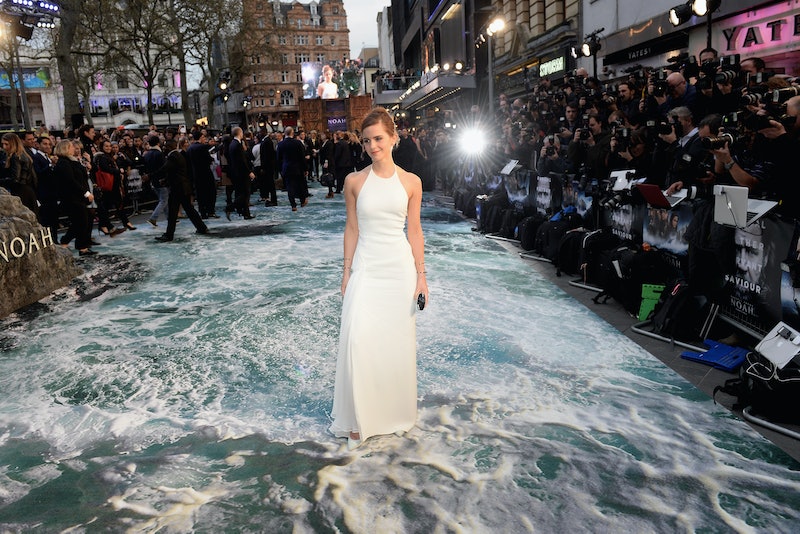 The author who broke your heart with The Perks of Being a Wallflower is setting pen to paper again, but this time Stephen Chbosky is writing a Beauty and the Beast remake for Disney. Now that the live-action version (called Beauty) has found its writer, it just needs to find its cast, and there's speculation that Emma Watson might be joining the team.

The actress had long been rumored to play Belle for the Warner Bros. adaptation of the story, but that project stalled when in June the director left the project. Now that Disney is full-steam ahead, it's possible that Watson could leave the derailed WB production to join the Disney team. After all, she worked alongside Chbosky as she played Sam in the film adaptation of his book The Perks of Being a Wallflower. According to Entertainment Weekly, the two "had plans to re-team on the adaptation of Adena Halpern’s novel While We’re Young" until Fox cancelled the project. With all these other things falling through, it makes sense that Watson would still be looking to team up with Chbosky, and she's clearly comfortable taking on the role of Belle if she was rumored to be attached to the WB version.

And why shouldn't she be comfortable? Watson would be adept at playing such an iconic character because Belle has these 7 things in common with a character Watson has already played: Hermione Granger.

THEY BOTH LOVED BOOKS

Belle walked around with her nose in a book as much as possible and we all know how Hermione Granger feels about the written word.

If only Ron and Harry could have understood what Belle and Hermione knew: books hold the answers to most of life's problems.

THEY BOTH HAD TO CONTEND WITH HAIRY BEASTS

I'm sure after facing Fluffy, Hermione would be glad for a chance to have the beast turn out to be good in the end.

THEY BOTH HAD TO SAVE THEIR PARENTS

Belle had to go to an ominous castle alone to rescue her father and Hermione had to erase her parents' memories to protect them while she battled Voldemort.

Both characters were young, but showed immeasurable strength to protect the ones they loved.

THEY BOTH HAD TO DEAL WITH EGOTISTICAL BOYS

Hermione had her very own Gaston in Quidditch player Cormac McLaggen who thought way too highly of himself.

THEY CAN BOTH DANCE

THEY BOTH WERE STRONG WOMEN

They were take charge and not afraid to stand up to the bullies in their lives.

Gotta love a strong female character. It's cleat that with all these commonalities Watson was made to be a Disney princess, so let's hope Stephen Chbosky can convince her to get on board for the role she was always meant to play. Besides, she already has a version of that iconic golden ball gown, so it must be fate.