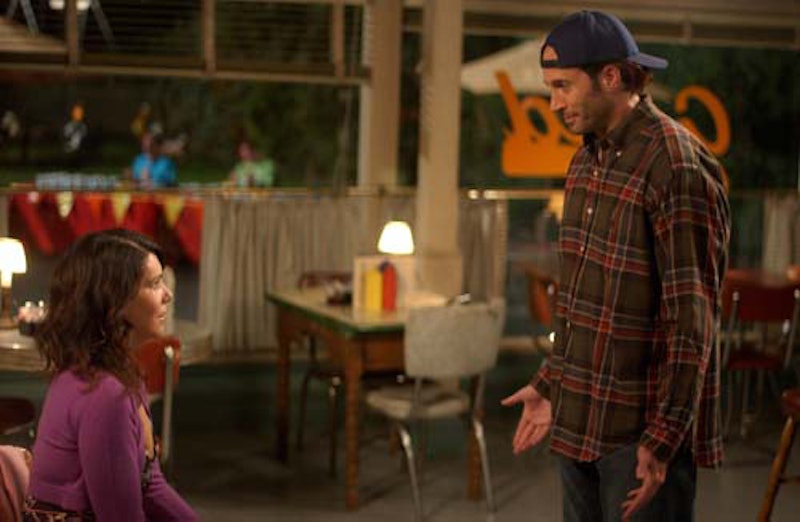 There are a lot of good things about October — like fall drinks at Starbucks and crunchy leaves — but the best part of the month this year? The fact that Gilmore Girls is officially on Netflix in its entirety. Grab a PSL and strap in, because there's nothing like fall in Stars Hollow. And obviously, once you get Netflix loaded, there's one episode you have to head straight to: The episode when Lorelai proposes to Luke. And if you don't remember when that perfect moment happened, that would be Season 5, Episode 22: "A House is Not A Home."

In case it's been awhile since you've caught up with Lorelai and Rory, let me remind you — this is one of the best episodes in Gilmore Girls history. It has basically everything you could want in 44 minutes of television: Comedy, romance, grand theft boating, grandparents who are both sassy and rich, and donuts. Lots and lots of donuts. Rory gets arrested for her shenanigans with Logan (who, many years later, is still one of the hottest TV boyfriends ever), and Rory ends up dropping out of Yale — although we all know that doesn't last for too long.

If you're binge-watching down memory lane, you're probably watching this episode for the proposal, but that's just one of the many amazing Gilmore Girls moments we get to see in "A House is Not A Home." Here's why it is the best episode, hands down:

The morning after Lorelai busts Rory out of jail, she greets her with a breakfast of bread and water, a mugshot on the fridge (she thought "it would look nice next to her kindergarten handprint collage") and will only speak to her via telephone as they sit across from each other at the kitchen table. This is obviously the most hilarious way to handle your daughter getting busted by the cops for stealing a boat... and for some reason, I feel like this is exactly how my mom would react if I ever got arrested.

And, of course, one of my favorite Gilmore Girls quotes ever: "Rory, the penal system is not something we enjoy. It's something with a name that makes us giggle."

And the whole bike thing

Because of course Taylor jumps at the opportunity to have a bike race routed through Stars Hollow... even if it does end up coming to a grand finale in the middle of the night, when people were not shopping for commemorative t-shirts.

That secret about Lane's mom

The secret being that she was in an all girls Christian tambourine band, which brings some fantastic imagery to mind. Why couldn't they have given us a flashback of that?

Luke jumps in to help Rory

Because even though Christopher is the best dad he can be considering the circumstances, Luke has always been the most fatherly figure to Rory, and if she's thinking about dropping out of school, he's ready to prioritize getting her back on the right track above everything else. Luke's concern for Rory is exactly why we love him so much — and Lorelai loves his reaction so much that she pops the question right then and there. And, as we all know, the rest is history.