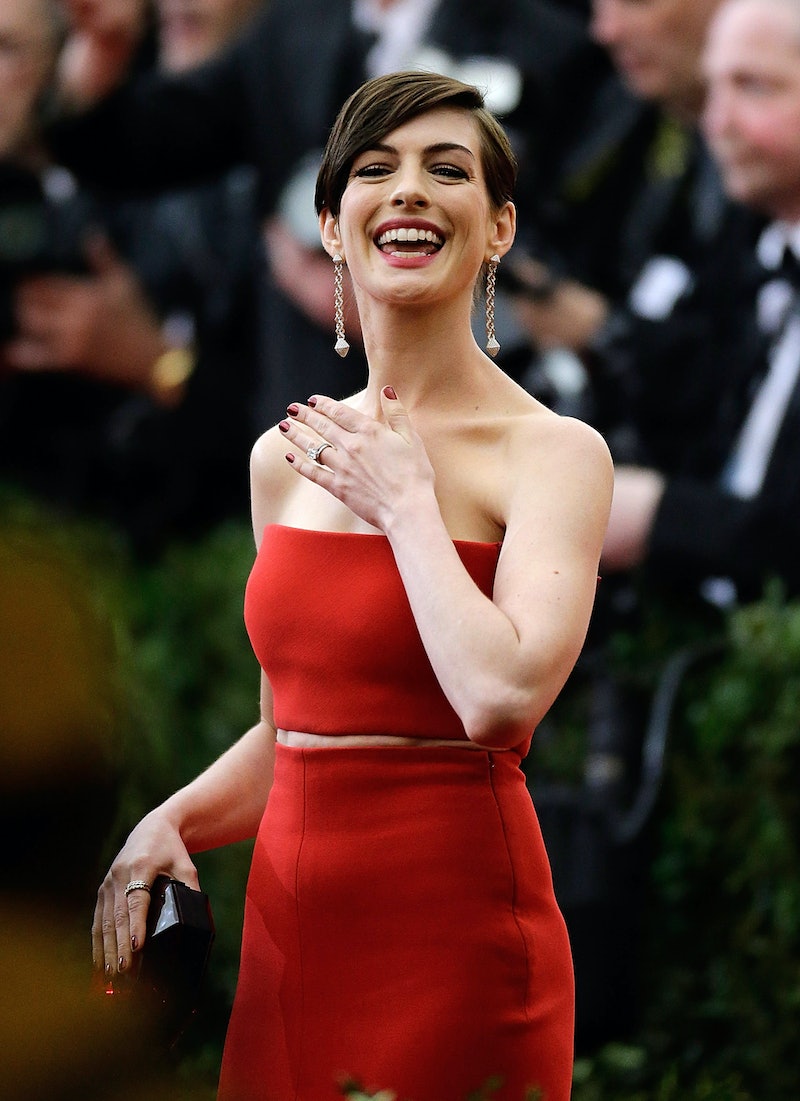 Anne Hathaway—the name that launched a thousand think pieces. The cover girl for the November issue of Elle UK, Hathaway talks about her struggles with fame: "This fame thing? F--ked me up for a really long time." It explains why Hathaway ghosted from Hollywood for so long, after the intensely disgusted response to her Oscars speech for Les Mis. Hathaway is notorious for being one of the most hated actors in Hollywood, and there's no shortage of articles dissecting what, exactly, makes her so universally detestable—including one in The New York Times. Anne Hathaway addresses all the negative attention in the Elle interview, and I gotta say, it really makes me feel like shit about myself.

I was a Hathahater, and honestly, I can't even remember why. When she all but disappeared from the public eye, my opinions about her, which used to be incredibly strong, faded into nothingness as well. Hathaway says of fame in Elle: "I didn't know how to do it; I didn't know how to engage with it; it stressed me out. And people would say, 'You just have to be yourself,' and I was like, 'But I don't know who that is yet!'"

I can understand her conflict—Hathaway was panned for her inauthenticity. As Ann Friedman wrote on The Cut in comparing her to Jennifer Lawrence, "She' always onstage, always calculated — not someone with whom you’d want to party or share your deepest secrets. The biggest difference between them is their interview and red-carpet persona. Hathaway doesn’t have the same down-to-earth delivery." And as a Crushable blogger wrote, "I feel like she’s not a real person."

Oof. Regardless of how grating I found Hathaway, I don't think that denying her personhood is an appropriate judgment. And it's clear that at the height of the Hathahate, Hathaway felt so responsible that she went so far to say that people needed a break from her. Well, that makes me feel like a crappy asshole, that the widespread hatred of her was so intense that she felt she owed it to people to disappear. Like I said, I don't know what it is that made me dislike her; probably the same vague reasons as everyone else—her unending eagerness to be Liked in Hollywood, that behavior of an affected theatre kid. But what's so bad about that?

She's come to peace with not concerning herself any longer with the public's opinion, saying "I've realized that don't need validation from anybody. At all. I'm not sitting here now worrying, 'What do you think of me?' With all due respect, you seem like a lovely lady, but I don't need you, or anyone else, to like me. And that's so liberating." If an actor like Emma Watson or Jennifer Lawrence had expressed this sentiment, it'd be applauded, but I know that Hathaway will still get hate for her Elle interview. I'm seceding from the movement of Hathahaters, though. It seems like a harmless indulgence to engage in a communal hatred of celebrities—sort of the enemy of my enemy is my friend kind of thing. But when it mutates from harmless dislike to disparaging, vile hatred that makes actors hate themselves, it's baseless and just mean.

And I think that's what made Hathaway so disliked; you could be a mean girl towards her without feeling like you were doing anything wrong. But I don't jive anymore with the gleeful defamation, and I think any critiques of her that compare her to other female actors should stop. I hope her interview made other Hathahaters feel like crap, too.

More like this
Bustle Newsletter: June 30, 2022
By Stephanie Talmadge
Howard Stern's Net Worth: Is He The Richest Man In Radio?
By Hugh McIntyre
Adele’s All-Female Lineup Includes Kacey Musgraves, Mahalia, & Self Esteem
By Shahed Ezaydi
I Have Eyebrow Alopecia – & Microblading Gave Me My Confidence Back
By Jessica Morgan
Get Even More From Bustle — Sign Up For The Newsletter