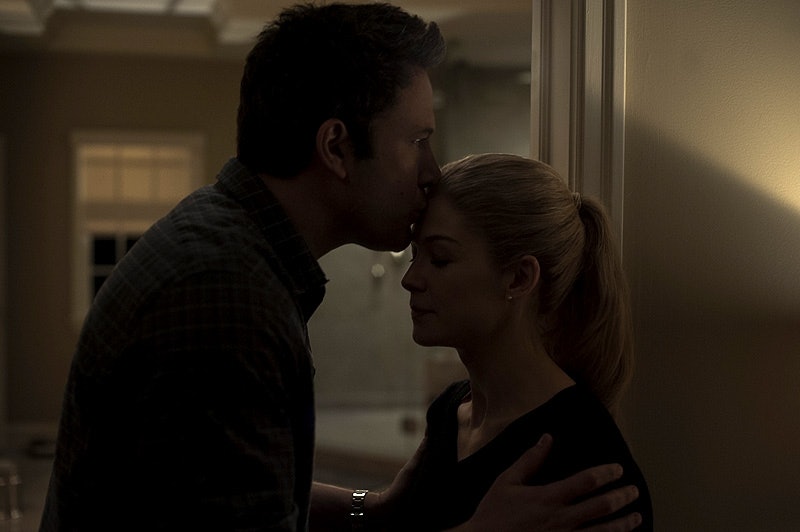 First things first. If you haven't yet read Gone Girl, or if you care about spoilers, please don't read further than this sentence, because I'm about to give the whole ending of this book away. Now, for those of you still with us, here we go: It's a question that's likely been on the mind of every fan since they flipped through the final page of Gillian Flynn's epic novel Gone Girl — and likely a question that will be on the mind of every fan after they see David Fincher's film adaptation of it when it hits theaters on Oct. 3. Will there ever be a sequel to Gone Girl that will finally give us some closure after that slight cliffhanger of an open-ending? I mean, it can't just end like that, right?

Well, I hate to be the bearer of bad news, but, it seems that whether we all like it or not, it can end like that — and it will.

If you need a refresher, basically the book ended with Amy having returned to Nick after faking her own disappearance and trying to frame him for murder with a series of faked diary entries chronicling his supposedly increasing abusiveness toward her (all fabricated). Though he's initially primed to turn her in to the police, Amy blackmails him, and reveals that she's pregnant with his child. As a result, Nick drops his plans to write a memoir exposing Amy as a sociopath and murderer in favor of raising his child, and she basically gets away with it all — the bad guy wins.

Not the most satisfying of endings, and also perhaps a bit open-ended — but author Flynn herself doesn't see it that way. In a 2012 interview with EW , Flynn commented on some backlash she'd received about the ending, and more-or-less said, plainly, that a sequel will never happen:

What did you want to accomplish with the ending?First of all, I didn’t write it as an open ending to set up a sequel at all. It was the only thing that made sense to me, that made sense to what was true to the book and true to the characters. Amy’s not going to end up in jail. She’s Amazing Amy! You’re never going to find the aha! clue because she thinks she’s already thought of everything and that’s who she is. People think they would find that satisfying, if she were caught and punished. You know, when I’m at a reading or something, people will come up to me and are very honest about saying, “I hated the ending!” I always say, “Well, what did you want to have happen?” And it’s like, “I wanted justice!” I promise you, I just don’t think you’d find it satisfying for Amy to end up in a prison cell just sitting in a little box.

She's right, when you think about it — having Amy brought to justice is the only place this story can really go without seeming unrealistic, and there's no way even a sequel could cover that.

And what about Amy, perhaps, dying?

I know a lot of readers wish she’d died.That would have been the other option, to kill her off — but who’s going to do that? I’m not going to have Nick do that. He’s not going to do it. And to have anyone else do it is putting him back in the stage where he started out, which is having other people do his dirty work all the time, so that didn’t work for me either. So you know, I did think it all through, and for me, I’ve always loved those endings of unease. [...]

I do want to add, though, that it’s fine with me if people don’t like that ending. I’ve heard there’s online fan fiction that people write their own alternate endings, and that’s cool! If you’re still thinking about the book and have your opinions on it, I think it’s a great thing.

So, there you have it: Don't expect a Gone Girl sequel. But, if you're still itching for more stories like Gone Girl, there's a handful of novels here that will do the trick, and there's always Flynn's two other novels: Sharp Objects (already being developed into a TV show!) and Dark Places (also being developed into a film starring Charlize Theron and Christina Hendricks).

More like this
Everything To Know About The Musical ‘Joker’ Sequel – & Lady Gaga’s Role
By El Hunt
What Song Does Eddie Play in 'Stranger Things'? Metallica’s “Master Of Puppets” Ignites The Season 4 Finale
By Alyssa Lapid
At 14, Jenny Han Wrote Rom-Coms About Her Friends & Fan Mail To Leo DiCaprio
By Alyssa Lapid
The 'Spiderhead' Movie Ending Is Nothing Like The Short Story It’s Based On
By Morgan Leigh Davies
Get Even More From Bustle — Sign Up For The Newsletter