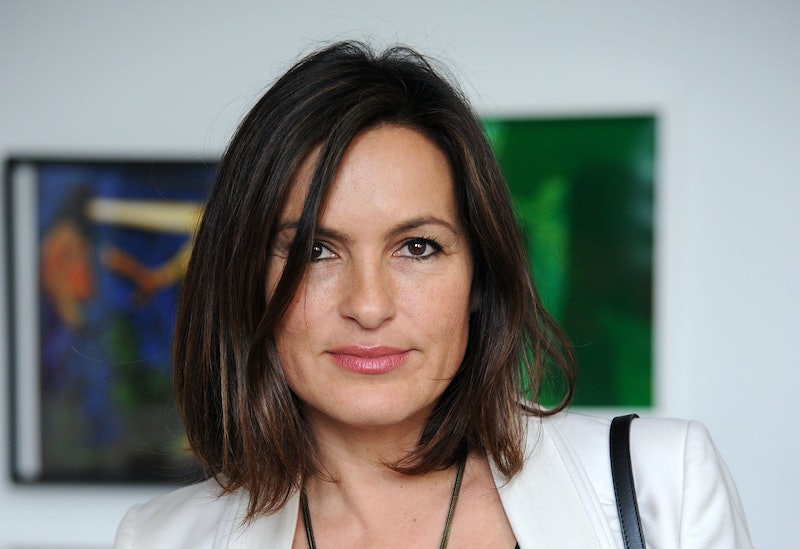 Does art imitate life anywhere more than on Law & Order? The long running and beloved procedural and all its iterations have been ripping from the headlines since the very beginning. I love Jack McCoy, but let's be real, Special Victims Unit is the greatest of the triad of L&O. There is no sweeter justice than that delivered by Olivia Benson and Elliot Stabler (am still in denial that Christopher Meloni left the show). SVU is known to interpret real-life crimes, often slyly denying that the episodes are based on true events, but we know they trippin'. And in Wednesday night's episode with the amazing title "American Disgrace," SVU will address a slew of controversies from 2014: the ElevatorGate between Jay Z and Solange; the Ray Rice domestic abuse case; and Donald Sterling's racist tirades.

Apparently, the episode will focus on the ambiguity of cases when there is surveillance footage as evidence, but no audio — what's really going on? Regardless, I am SURE we're in for some merciless Benson teardowns. I love when she takes down sexual predators!! When they take on these real-life crimes, however loosely they may be portrayed, SVU often delivers endings that satisfy our desire to see justice served, when we don't get that in reality. Here are some of the best episodes that do just that.

Besides the slamming burn that Benson delivers to the perp, this episode was a great take on the case of Tanya Nicole Kach. Kach was kidnapped by a man working as a security guard at her school when she was only 13 years old in Pennsylvania, and was held captive for a horrifying decade before she managed to ask for help from a grocer in her neighborhood. In the 22nd episode of SVU's first season, Benson and Stabler rescue a woman named Illeana who is being held captive by a wealthy man — but, thankfully, in the episode, the detectives manage to save the girl after she's been held captive only three years. It's a gripping portrayal of Stockholm Syndrome.

Yeah y'all: the one with Hilary Duff. The episode starts as an almost point for point portrayal of the Casey Anthony case; Anthony was suspected of killing her infant daughter, Caylee Anthony, but was ultimately acquitted because there wasn't sufficient evidence. Of course, the verdict infuriated and disgusted the public, when it seemed so obvious that Anthony was guilty. "Selfish" takes a different turn. Ashlee Walker, played by Duff, didn't kill her daughter Sierra, who in fact died of being exposed to measles by another child whose parents refused to vaccinate. "Selfish" manages to shift the blame and makes Walker a sympathetic character, much different than Casey Anthony; it also slams the anti-vaxxer movement, so two for two.

I love it when SVU goes after dirty cops. This episode stars Dean Winters as Cassidy (Olivia's BF!) going undercover in the NYPD to expose cops that have committed rape, and the department's coverup of the sexual assault. It's a satisfying take on the real case of Kenneth Moreno and Franklin Mata, two New York City cops that were acquitted of rape charges in 2011 and accused their victims of lying. In "Internal Affairs," the corruption of the department is ruthlessly exposed, and no mercy is shown for the guilty cops. BYE, SYSTEM ABUSERS.

Of course, not always does SVU alleviate our disappointment when the system fails; in an episode that was based on Chris Brown and Rihanna, for example, the woman based on Rihanna sadly is killed after much victim-blaming. Episodes like this make us reflect on who the justice system really protects. "American Disgrace" may well be the perfect opportunity to present a more satisfying response to the Rice domestic abuse scandal, and hopefully, will address the horrific coverup with some classic Benson ballbreaking.

More like this
Where Is Oscar Torres In 'Only Murders In The Building' Season 2?
By El Hunt
The “Beatrice Six” Were Awarded $28 Million After Their Wrongful Convictions
By Brad Witter
It Took Investigators 23 Years To Correctly Identify Helen Wilson's Real Killer
By Brad Witter
Travis Alabanza On Not Fitting In
By Sam Ramsden
Get Even More From Bustle — Sign Up For The Newsletter