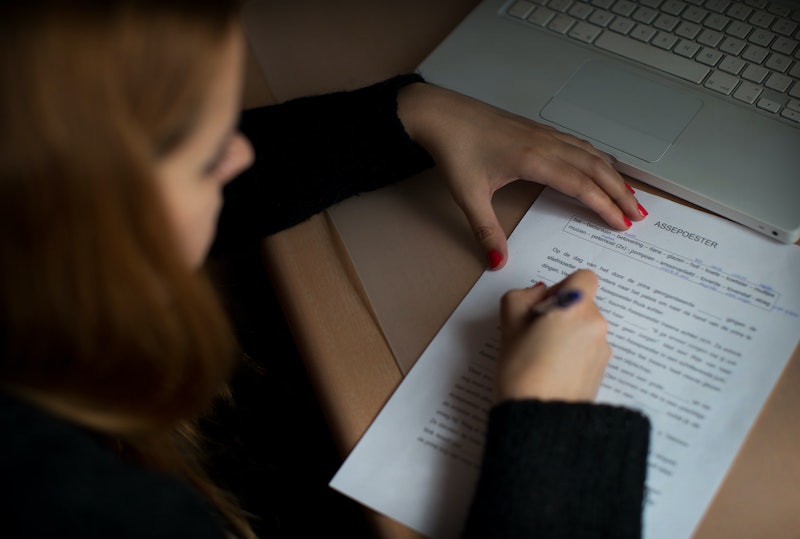 For most of my life, I was homeschooled. Between sixth grade until I graduated as a high school junior, it was all living room oral presentations, field trips to chocolate factories, and figuring out whether I should call my mom “Mrs. Elderkin.” That's right — I was one of those kids.

Sure, there were plenty of great things about being homeschooled: I could study what I wanted, when I wanted. And if I didn’t feel like doing a Q-and-A quiz about Romeo & Juliet, I could write a short play from the perspective of two party attendees instead.

But it wasn’t easy. As much as I hate to admit it, traditional schooling prepares you for life in a way that homeschooling never can. You’re not teased at home the way you are at school, which means you don’t build a thick skin. And you don’t really know how to socialize with a large group of people, which can make parties as an adult a little uncomfortable.

Still, I wouldn’t trade my education for anything. Homeschooling has its perks, many of which you can only understand if you’ve also spent some time studying at home. If you were homeschooled, then you know what I'm talking about. Here are 27 things only those of us who were homeschooled can truly understand.

YOU CAN BE A TAD AWKWARD

Chalk it up to spending most of our years in a living room-style classroom with only our mom and siblings to chat with.

YOU DON’T GET BORED EASILY

We’ve had to spend a lot of time by ourselves, or just with a couple other people, so we’ve learned how to keep ourselves entertained.

you know WE’RE NOT ALL SUPER RELIGIOUS

Most homeschoolers are seen as Bible-thumping shut-ins who still think the Sun revolves around the Earth. But there are a lot of reasons parents choose to homeschool their kids, including living in a bad school district or just wanting more time with their kids.

...though YOU KNEW AT LEAST ONE HOMESCHOOLER WHO WAS super religious

Each one of us probably went to a sleepover where we had to say a five-minute grace before eating, and later get judged by our friend’s mom for having a Spice Girls pillowcase.

DESKS? WHAT ARE DESKS?

In homeschool, everything’s a desk! The couch, the floor, the jacuzzi. And when we were feeling a little under the weather, you can bet we’d be lying in bed doing math problems while Mom fixed us up some chicken noodle soup.

“YOU WERE HOMESCHOOLED? BUT … YOU’RE NORMAL” is something you hear all the time

Can’t tell you how many times people have thought it was strange that I wasn’t wearing full-length denim skirts and talking about Vanilla Ice as if he was still the “latest thing.”

YOU EITHER LOVE YOUR SIBLINGS — OR you LOATHE THEM

When you see your siblings all day, every day, one of two things will happen. You’ll either develop a really close bond that will last your entire lives, or you’ll hate each other’s guts and want to poke their eyes out with sticks. Usually, it’s both!

Give us a task and we’ll figure out how to do it pretty quickly. After all, we spent a lot of time learning how to do stuff by ourselves.

IF YOU DIDN’T WANT TO DISSECT A FROG, YOU TOTALLY DIDN’T HAVE TO

YOU’RE GOOD AT BEING SELF-MOTIVATED

Like, ridiculously good at it. Since we didn’t have a bunch of teachers breathing down our necks (other than our moms and dads) we really had to push ourselves to get work done and not procrastinate.

STILL, PROCRASTINATION WAS PART OF THE GAME

Can’t tell you how many times I found out someone was NOT the father.

EXTRACURRICULAR ACTIVITIES WERE THE BEST

For people who went to public school, a trip to a museum or park might seem like just another boring school activity. But for homeschoolers? It was the best time ever! After all, we didn’t get many chances to leave the house, so we took what we could get and loved it.

Since grounding and detention were pretty much the same thing, lots of us got extra guilt trips from our parents when we didn’t do well on an assignment or test.

and YOU’RE probably REALLY CLOSE WITH them

YOU Didn't REALLY THINK ABOUT HOW ODD HOMESCHOOLING IS

Only about four percent of students are homeschooled. That means it’s actually more common to be left-handed than is to study at home. But, since most of our friends growing up were also homeschooled, it’s not really a thing for us.

You know, where everybody looks like they’re 25, makeovers happen every week, and prom is the most important and expensive thing ever. That’s totally what it’s like, right?

YOU probably WENT TO COLLEGE IN HIGH SCHOOL ... BUT IT’S NO BIG DEAL OR ANYTHING

BULLYING AND DRAMA DON’T MAKE SENSE to you

Most of us don’t really know how to mess with other people or play games, because we never really had to do that growing up.

We didn’t have a lot of people around us growing up, so when we make friends, we work hard to keep them. Become friends with a homeschooler and you’ve got a BFF for life.

YOU KNEW WHAT YOU WANTED TO DO WHEN YOU GREW UP, AND YOU PROBABLY DO IT NOW

While homeschooling made us socially-awkward, it helped us hone our talents to what we really liked, which is why a lot of us have jobs we love.

...BUT THE NUMBERS DON’T LIE, PUNK

Homeschooling is turning out some of the smartest, coolest people out there. We score higher on tests and are actively recruited for top colleges. Also, did you know Felicia Day spent most of her education as a homeschooler? Sweet.

sure, THERE WERE AT LEAST A COUPLE OF TIMES YOU DREAMED ABOUT GOING TO PUBLIC SCHOOL

BUT NOW, YOU CAN’T EVEN IMAGINE WHAT IT WOULD’VE BEEN LIKE

BECAUSE HOMESCHOOLING MADE YOU THE AWESOME PERSON YOU ARE TODAY

And you wouldn't change it for the world

Just don't ask us whether or not we plan to homeschool our own kids. Honestly, we probably have no idea.