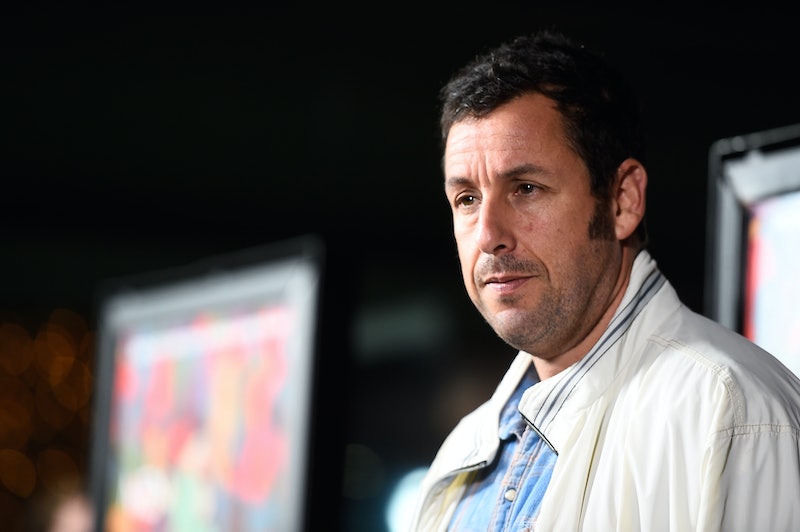 Netflix is really stepping up their original programming game these days. Of course, it will always hold a special place in my heart as the network that gave us Orange Is the New Black, but its efforts to add original movies to its programming block as well shouldn't be scoffed at either. In addition to the Crouching Tiger, Hidden Dragon sequel that Netflix announced is in the works, it's got something equally as exciting in the works. Apparently, Adam Sandler will make four original Netflix movies and he's pretty excited about it.

"When these fine people came to me with an offer to make four movies for them, I immediately said yes for one reason and one reason only…" said Sandler in a statement, according to The Wrap. "Netflix rhymes with Wet Chicks. Let the streaming begin!!!!" Netflix Chief Content Officer Ted Sarandos had his own, more demure statement to add: "People love Adam's films on Netflix and often watch them again and again. His appeal spans across viewers of all ages — everybody has a favorite movie, everyone has a favorite line — not just in the US but all over the world."

And there's certainly no denying that. Everyone has a favorite Adam Sandler movie, and a least favorite Adam Sandler movie, because Sandler's career in starring, directing, and producing these films have hit some very high highs and some very low lows. In fact, his films are on such a clear spectrum that it's almost impossible to tell exactly what kind of movies he plans to bring to Netflix as part of this four picture deal. Which Sandler will we be getting here?

Will it be the Wildly Offensive But Still Surprisingly Thoughtful Sandler of You Don't Mess With the Zohan?

Will it be the Surprisingly Serious Sandler of the upcoming Men, Women, & Children?

Will it be the Tastefully Funny and Poignant Sandler from early movies like Billy Madison?

Or the Under Appreciated Comedy Gold Sandler from Anger Management?

Sandler has had the kind of career that makes it impossible to know if we're in for something thoughtful and poignant like Funny People and Men Women & Children or something raunchy and horrifying like That's My Boy and Jack and Jill. For me, there seems to be a dud for every one movie of Sandler's that I've thoroughly enjoyed and it's been a while since I've been as excited about his movies as I was when Happy Gilmore, Billy Madison, and Big Daddy were the films most frequently associated with his name.

On the one hand, Sandler could use that unpredictability to his advantage. People have no idea what to expect out of him anymore, so this is his chance to truly surprise them with each of the four films he'll debut on Netflix. For all we know, he could explore a different genre of comedy or drama with each one. However, on the other hand, it's hard to truly get excited about new Sandler films anymore because I, for one, don't know if I can identify myself as a Sandler fan. I love some of his films and hate others. Even some of the films I loved, such as You Don't Mess with the Zohan and 50 First Dates, are still films that I acknowledge are problematic in their themes or plots.

At the end of the day, this is a good chance for Sandler to show us what he wants to be about as an actor, director, and producer at this point in his career. This is his chance to some consistency or at least to break newer ground than before. And, as the viewing audience, this is our chance once and for all to decide if we're still fans of Sandler, without having to spend $13 at the movie theater to find out.

More like this
What’s New On Netflix: 'Stranger Things' & 'Mean Girls'
By Arya Roshanian
What’s New On Netflix: The Return Of 'The Umbrella Academy'
By Arya Roshanian
Here’s Everything Coming To & Leaving Netflix In July
By Grace Wehniainen
Everything You Need To Know About The 'Knives Out' Sequel
By Grace Wehniainen
Get Even More From Bustle — Sign Up For The Newsletter