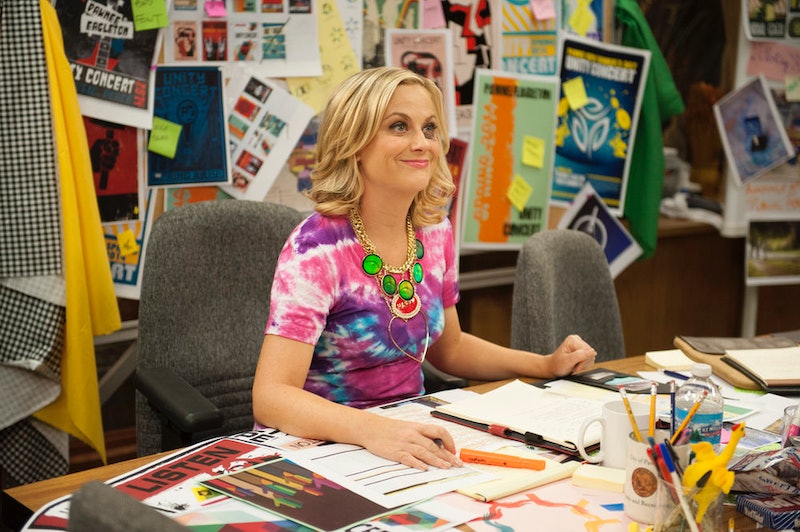 Good news: we get to indulge in one final season of Parks and Recreation. Bad news: Season 7 of Parks and Rec won't begin until midseason (most likely 2015). The Season 6 finale ended with a three-year time jump that left many of us wondering what the Parks department was going to be like for the final season. We lost Ann Perkins and Chris Traeger last season, and who knows how involved Chris Pratt will be now that he is a mega movie star. It feels like everything we once knew no longer exists in the town of Pawnee.

The wait until Season 7's questions are answered is going to be torture. So what are we supposed to do until then? Well, thanks to modern technology, we binge watch some of the best episodes of the show until its return. Parks and Rec has had six successful seasons, and each season has been full of episodes that are worthy of watching again — some are worthy of watching a million times over, but I'll get to that. So bundle up with a waffle or two, put your Cones of Dunshire game on hold, and get ready to relive all of your favorite moments of Parks and Recreation as you wait patiently for Season 7 to air.

In case you want someone to share all of the terrible possibilities of first dates, Leslie Knope is your girl. Also, this episode can be considered "The One With Duke Silver."

Ron's hatred turned lack of will power regarding his wife Tammy — played by Nick Offerman's actual wife Megan Mullally — is hilarious and so is Ron Swanson. Another worthy watch, "Ron and Tammy: Part 2," only so you can see Ron Swanson in cornrows.

Because Andy and April's relationship is the best.

Ann and Leslie have their first fight, but more importantly, the entire group gets drunk off Tom's new alcohol. While you're at it, check out Drunk Ron Swanson for a continuous loop of the above to "Who Dat Girl."

This is a total "I am woman, hear me roar" episode. It marks the start of Leslie's run for city council, which proves to be a challenging feat. Unfortunately, Leslie has to break up with Ben because of her candidacy.

The most important lesson to learn from this episode is: "Treat. Yo. Self."

If you love Leslie and Ben — and who wouldn't — and you love when Larry/Jerry/Gary has a fart attack, then this is your dream episode.

Because they're perfect. Look at them.

If you've ever moved away from a friend, or you are just too emotionally invested in Leslie and Ann's friendship — like me —, you cried during this episode.

If you're re-watching to get ready for Season 7, then you need to re-watch Season 6's finale, when the final moments show an intriguing three-year jump into the future.

More like this
Why Sadie Sink Is Hopeful Max Will Return In Stranger Things Season 5
By Brad Witter
Hayden Panettiere Admits "Addiction" To Alcohol & Opioids Before Going Sober
By Jake Viswanath
Everything To Know About The 'Pretty Little Liars' Reboot On HBO Max
By Mary Kate McGrath, Jack Irvin and Radhika Menon
'Schitt's Creek' Star Sarah Levy Named Her Baby Boy After Her Famous Father
By Jake Viswanath
Get Even More From Bustle — Sign Up For The Newsletter