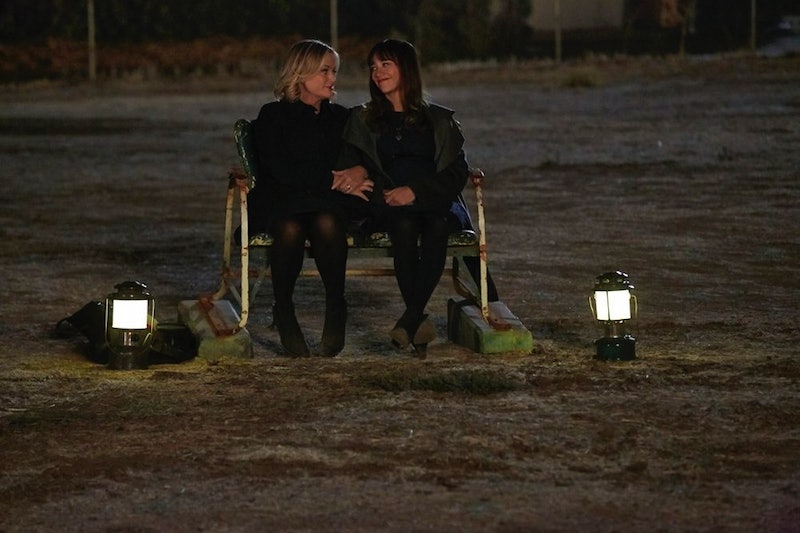 I don't know about you, but I'm not ready to say goodbye to Pawnee. I'm actually glad that Parks and Recreation Season 7 won't be back until midseason. Delayed gratification, right? The final 13 episodes are gonna be rough, emotionally. To prepare, I've been binging old episodes like Ron Swanson at a breakfast buffet. It's amazing how much has been set up over the years.

You may not remember the Parks and Rec pilot. I know I didn't fall for the show until Leslie Knope opened Season 2 with a Fresh Prince rap. In the very first episode, she met her number one galentine, Ann Perkins, at a public forum. Ann, played by Rashida Jones, had one simple request: turn a dangerous pit into a beautiful park. It's been the through-line of the series. What does it take to build a park from scratch? In Season 6, Ann and Leslie finally broke ground on what is now called the "Pawnee Commons" (it was Lot 48 before that) and Ann left to raise baby Oliver with Chris Traegar, literally played by Rob Lowe. But it's not a park yet, and I'm worried that with the time-jumps and new format, the question asked by the pilot may be glossed over.

Let's recap. We've seen that hunk of dirt go through several changes. Early on, the pit introduced us to Andy. Ann's boyfriend at the time, he had fallen in and broken his leg. The pit housed a community garden and Andy himself for a while. Leslie and Ann blew past the red tape and filled in the pit, turning it into a lot. Over the years, many parties have tried to lay claim to the lot, even April Ludgate. She wanted a dog park — though foiling Ann was an added bonus. Mark Brendanawicz (aka Mark Brendana-quits) gave Leslie plans for Lot 48 before he exited the show. They were abandoned for an Eagleton architect, foreshadowing the Season 6 merger. Then a fundraiser for the Commons became Ben and Leslie's flash wedding.

What's concerning to me is that the season is so short and there's so much to cover. While I cannot wait to learn which historical figures Ben and Leslie's triplets are named after, that's three new tiny characters —not to mention their nanny, played by Rachel Dratch. Filming has been spotted in Chicago as well as our nation's capital. As much as I love it when the cast goes on vacation, why can't we just stay in Pawnee?

The biggest clue I have that the Pawnee Commons will feature in Season 7 is that two of its biggest opponents might be teaming up, Tammy II and Councilman Jamm. We first met Megan Mullally's Tammy Swanson in the second season when she revealed her plans to put a library on Lot 48. The nerve! Then, Jamm wanted to put a Paunch Burger on the land in Season 5 and garnered quite a bit of support from local citizens. It may have been a smart idea for Ron and Diane to pair these two romantically, but their forces combined could doom Leslie's pet project.

Season 7 is sure to have some fun moments. I would just be sad if The Pawnee Commons is already up and running in 2017, which is when the flash forward took place, and we never see how it ultimately came to fruition. Or, even worse, if the park never opened at all. That would be a dark turn. Parks wouldn't do us like that, would it?

The pit even inspired one of my favorite Mouse Rat songs on the show, which you can actually download and is appropriately called "The Pit." Incidentally, the song is on "The Awesome Album" — was Chris Pratt foreshadowing his Guardians of the Galaxy star turn and "Awesome Mixtape Vol. 1?"

Spread your wings and fly, everyone.