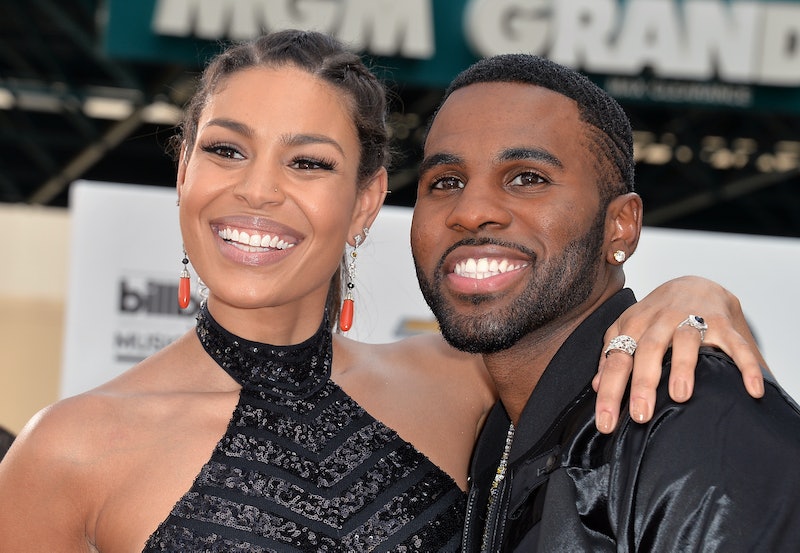 I don't think I'm only one to have way more emotions about this Jason Derulo and Jordin Sparks breakup than I expected. I did not know I cared so much until it was over. My immediate reaction was that I just wanted them to get back together and do a musical collaboration to seal the deal. Now just a few days later, I am pretty much over hearing about it. I understand the need to talk about your problems for a cathartic release, but Derulo is basically on a breakup tour at this point. Does he even have an album to promote? (To answer that question, no. His last album, a re-release actually, came out in April.) Are the album sales lagging so much that he needs to tell every media outlet about every single reason they are not together? Derulo will not shut up about it. It makes me miss the innocent days of Derulo singing his own name over and over again. So why did Derulo and Sparks break up? Instead of tweeting Derulo — who, actually, would probably give you an answer — let's take a look at what the pair has been saying so far and try to figure this out.

"Every relationship has ups and downs. There was a lot of pressures of marriage. [sic] There was a lot of arguing and stuff like that that just weighed on our relationship over time," Derulo explained in an interview with Ryan Seacrest. He's the one who had a single called "Marry Me" where he proposes to Sparks in the music video. So apparently the pressure was okay when it could help him move up the Billboard charts, but not now? Interesting. They are both young adults with burgeoning music careers, so there is no need to rush into marriage. Maybe the pressure from their friends, family, and the media was too overwhelming and they needed to take a step back?

"You're gonna always see pictures of me with other women but you can't —You can't put that woman in my bed just 'cause she has her hand on my shoulder, you know what I'm saying?" Derulo said in an interview with Power 105.1's Breakfast Club when he was asked if he cheated. "Like, women are around me all the time and women, like, grab [ahold of] me all the time. You could literally snap a picture at any given moment and it could look crazy." That is valid. With everyone having smartphones today, any person can take a misleading picture.

However, Sparks might have said it all about the cheating rumors by electing not to say anything. When asked if Derulo ever cheated on The Wendy Williams Show, Sparks responded saying, "I actually don't want to comment on that." No comment is the best comment at all.

There is always gossip about successful people in the entertainment business, so it's hard to know what to believe. Sometimes a picture is worth a thousand words and sometimes a picture with a female fan is just a picture and there is no need to make a crazy story out of anything. Still, Jordin Sparks denying to comment makes me feel some type of way. I think she is either hiding something or just trying to stir the pot.

Yes, Derulo actually addressed this personal topic publicly. More than once. The topic of Sparks' virginity and her old purity ring came up in one interview. "Was she a virgin when you started dating her?" the interviewer asked. "Uh yeah...she was," Derulo responded. In another interview in response to a sex question he said, "It wasn't a problem in that area at all." Well so much for leaving any air of mystery there.

The topic of virginity is held in different regard with different people. Still, it seems it was important to Sparks, and seeing as she chose to drop the purity ring she wore indicates that she felt very strongly about the seriousness of her relationship with Derulo.

Derulo keeps bringing up the BMW that he purchased for Sparks as a gift. He said that he went back to retrieve his stuff from her house and pointed out that he left a BMW 7 sedan behind. "You think I should've [gone to] get the car that I got her?" he asked, then said, "No, I wouldn't take the car back." Then why do you feel the need to keep talking about it!? On The Wendy Williams Show, Sparks said, "He can have it." Good for you, girl. Use that American Idol money to buy your own car.

This just seems kind of petty to bring up. Yet strangely it has been addressed in multiple interviews. As a girl who has been through her fair share of breakups, I think there is a little more to the BMW references than the superficial way in which it has been presented. When you love someone and give a gift, it is symbolic of how you feel about them in that moment. It's not just an object, but the thought behind it that is meaningful. Giving that gift back is a gesture that can say that you are also returning those former feelings.

So why did they break up? Even with all of the interviews and quotes about the relationship, it is a little unclear. Obviously all my conclusions are all inferred, but there is definitely a lot of familiar territory here for anyone who's ended a relationship. Well, minus the press tour. It could be any number of the reasons above that they broke up, or a combination. As I see it, Derulo and Sparks need to channel their feelings about the breakup in the studio and write some hit songs. Sorry Jason, I am already tired of you trying to "Talk Dirty" every chance you get.