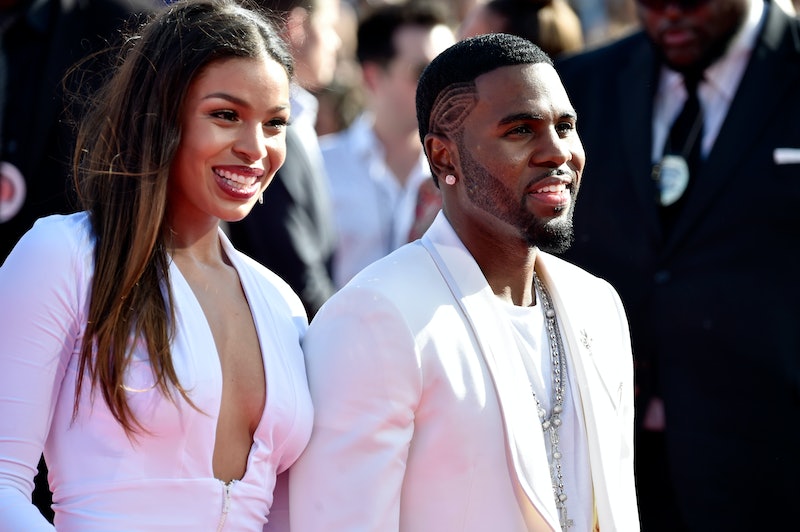 Update: Jason Derulo confirmed his breakup from Jordin Sparks in an interview with KDWB in Minneapolis. When asked if they would remain friends, Derulo responded, "Everything is cool man. It's not a bad situation, it's not one of those kinds of things."

How's this for a piece of news you didn't know would have an emotional effect on you until just now? Jason Derulo and Jordin Sparks have split up according to multiple sources who spoke with E! News. Try to tell me you didn't go, "Awww, really??" or "Not them!" at your computer. Yep, you might have thought you weren't invested in Derulo and Sparks, but still, part of you always knew they were there, lurking behind all the usual Hollywood gossip you hear. A piece of your mind knew that Jassssson Deruuuulo and Jordin Sparks were off somewhere being cute and normal and happy. And now that peace is shattered and all you're left with is hope that Vanessa Hudgens and Austin Butler (or insert your own random couple that you are vaguely invested in but rarely think about) will make it last.

According to E!, Derulo and Sparks' "breakup was mutual, but they still care very deeply for each other and will remain in each other's lives as friends." Well that's good to hear! But really, did you expect to hear that Derulo and Sparks' got in some sort of nasty argument in front of the Chateau Marmont? Nope. You probably don't know why that would be unexpected for them — does anyone really know that much about Desparklo? — but they just don't seem the type.

For those of you wondering, Derulo and Sparks began dating sometime around the end of 2011 and beginning of 2012. Since then, they have led people to believe they were engaged due to a suspicious song called "Marry Me" by Derulo which featured Sparks in the video. And other than that, they probably, ya know, enjoyed life together or whatever.

It sounds like Derulo and Sparks are on the same page with their split, so I'm sure they'll be fine. As for Hudgens and Butler, y'all better stick it out!