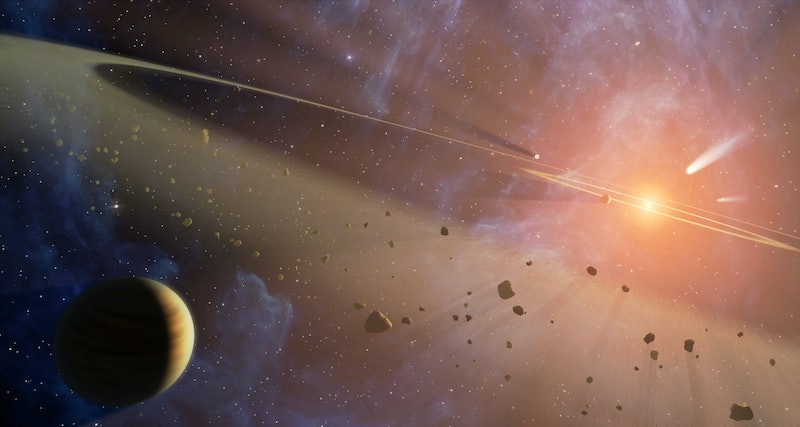 Here's a fun fact: The U.S. is actually pretty slow about dismantling its nuclear weapons arsenal — in fact, its dismantlement rate has gone steadily downwards since the 90's. But it turns out this isn't entirely to due to laziness, or reluctance, or lack of funds; no, as any sci-fi-buff-slash-conspiracy-theorist could have told you years ago, the U.S. is keeping old nuclear weapons in case of asteroids. Duh.

According to a report from the Wall Street Journal, several nuclear weapons that were scheduled to be destroyed by the start of the next fiscal year are being kept on standby, just in case they could be used against killer asteroids. As hard to believe as that may be, the whole thing is laid out in an April 2014 Government Accountability Office report

on the National Nuclear Security Administration, the agency in charge of America's nuclear arsenal.

The GAO examination found that the NNSA was not only way behind in its dismantlement process, but had actually kept a few nukes aside until their potential asteroid-fighting capabilities had been fully evaluated. Reads the document:

NNSA officials told us that CSAs [canned subassemblies] associated with a certain warhead indicated as excess in the 2012 Production and Planning Directive are being retained in an indeterminate state pending a senior-level government evaluation of their use in planetary defense against earthbound asteroids. While NNSA has declared these CSAs to be excess and, until March 2013, had scheduled them for disassembly beginning in fiscal year 2015, the national labs' retention letter has also characterized the CSA associated with this warhead as an "irreplaceable national asset."

If you're going to keep nuclear weapons around, then earth-destroying asteroids are, I suppose, as good a reason as any. After all, less than a month ago, a meteorite slammed into Nicaragua's capital, and officials suspect that its source was a mega asteroid (66 feet in diameter, if you want to freak yourself out by picturing it) that was casually sailing through our solar system at the time. And that's relatively common, by the way — as the Journal points out, at least 100,00 asteroids twice that size (at least 164 feet in diameter) have cruised near the Earth.

Each year, an asteroid the size of a car will hit the Earth's atmosphere and — although it'll burn up before reaching the planet, thank god — roughly every 2,000 years, an asteroid over 100 yards long will actually make it onto the Earth's surface. In fact, just last year, a 65-foot-in-diameter asteroid blew up near the Russian town of Chelyabinsk. The asteroid's force — equivalent to over 400,000 tons of TNT — left hundreds of residents wounded, and the area in shock.

Still, I'm not sure that keeping nuclear weapons on an "as-needed" basis is as comforting as it sounds — especially considering that, between the years 1950 and 1968 alone, over 700 accidents involving nuclear weapons were recorded, according to the Guardian. And let's not forget that little incident that nearly left North Carolina in smithereens.