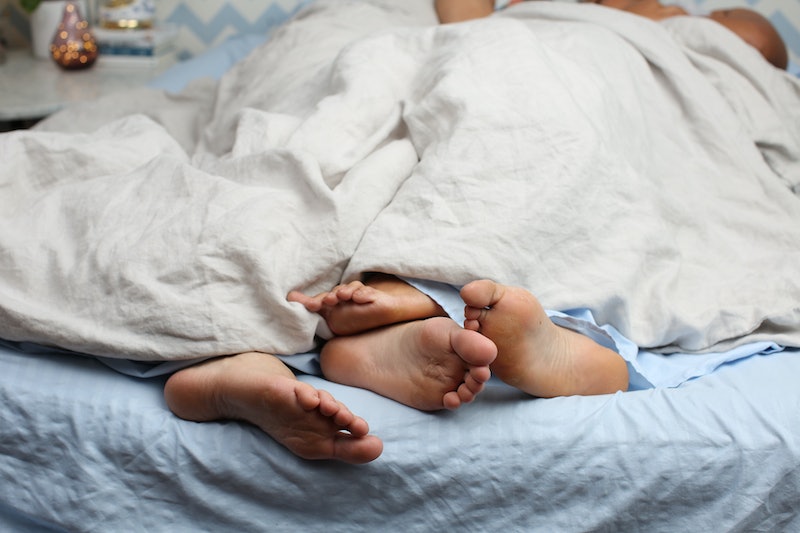 What's the more effective method of treating a headache: over-the-counter painkillers, or an under-the-pants orgasm party? Researchers at Germany's University of Munster claim the latter. In a study conducted in 2013, they found that 60 percent of migraine sufferers and 33 percent of cluster headache sufferers experienced relief while engaging in sexual intercourse. Study researcher Stefan Evers noted that the endorphins released during sex can function as natural painkillers, and declared that “having an orgasm in any way, shape, or form will help” those suffering through a headache.

And to think, you've just be chomping away on Tylenol this whole time, like a fool!

A 1999 study from Pennsylvania's Wilkes University found that regularly sexually active people had greater protection from colds than folks who got none. Study participants who had sex one to two times a week had 30 percent higher levels of immunoglobulin A, an antibody that prompts the immune system to fight against invading bacteria, than those who had no sex. But the study also found that those who had sex three or more times per week had the lowest immunoglobulin A levels; lower even than those who had had no sex at all. So over the winter, you might want to go heavy on the vitamin C, but only medium on the hot beef injections.

Though the stress of anxiety can turn our sex drives and vaginas into sad desert wastelands, studies have found that sex with a partner lowered the blood pressure of test subjects engaging in stressful activities. Scientists believe the oxytocin released after orgasm relieves stress, though for some reason, they're insistent that this only works for partnered sex, not masturbation. It has something to do with the added benefits of being with a trusted partner — the same study found that holding hands with a partner during a stressful situation gave subjects some relief. But solo orgasms do release oxytocin as well, so I say, might as well give it a shot. Scientists don't know everything, right?

Anxiety's BFF, chronic sleeplessness, can also be treated with a roll in the hay: scientists believe that oxytocin, in addition to offering relaxing stress relief, can also promote sleep. This is because oxytocin's effects counter those of cortisol, the so-called "stress hormone."

As famed sexologist Beverly Whipple observed, after women masturbated to orgasm, their "pain tolerance threshold ... increased significantly.” And what better place to apply this knowledge than to those monthly scourges of your uterus, menstrual cramps?

Oxytocin and other hormones released during orgasm can relieve cramps, with scientists finding the greatest jump in orgasm-related pain relief coming (ahem) from subjects who masturbated to orgasm. As someone who has been personally employing this technique since high school, I can attest that it doesn't work perfectly every time, but is more fun than taking a Midol. To the female reproductive system: the cause of and solution to all of life's problems!

Preeclampsia, a condition that causes pregnant women to develop high blood pressure (usually in their second or third trimester), might just be cured (or even prevented) by the same thing that put that tiny person-to-be in your belly in the first place. (For straight couples, that is.)

A study, published in the Journal of Reproductive Immunology, proposed that increased exposure to the father-to-be’s semen — including performing oral sex on the baby’s father and swallowing — could lessen the odds of a mother-to-be coming down with the illness.

Regular, short-term hiccups can be cured easily, with folk remedies ranging from drinking a glass of water, to being frightened by a friend who sneaks up behind you and then shows you your student loan bill. But intractable hiccups — hiccups that don’t stop, and can eventually result in insomnia and exhaustion, and even death — are a little bit trickier to fix.

However, some British researchers have found that sexual intercourse can cure hiccups. The researchers theorized that orgasm might have stopped the reflex which was causing the hiccups, giving the sufferer relief. It probably won't come up for you, but if it does, it's good to know that you have options besides eating a spoonful of sugar or what have you.To your health!

More like this
6 Abortion Advocates To Follow On TikTok
By Sara Youngblood Gregory
Every Single Big & Small Way You Can Fight For Abortion Rights
By Tess Garcia
The 7 Best Knee Sleeves, According To An Expert
By Andrea Hannah
The UK Abortion Laws In 2022, Explained
By Sophie McEvoy
Get Even More From Bustle — Sign Up For The Newsletter