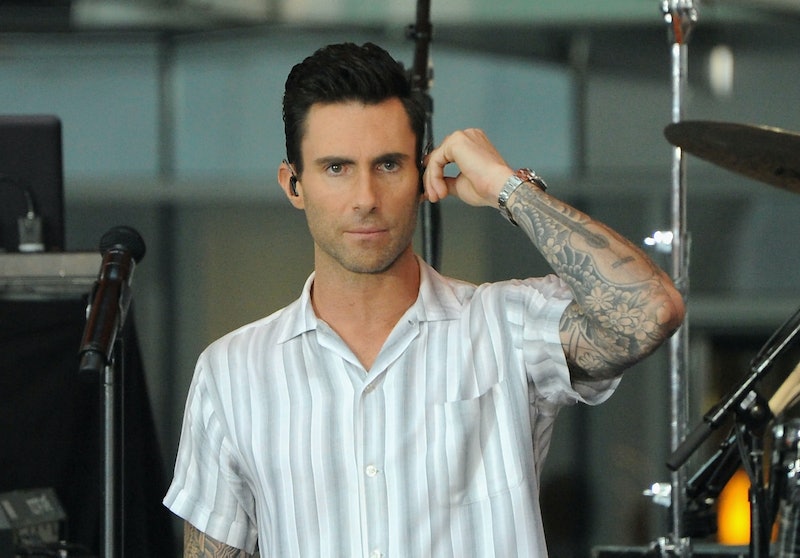 Rut roh. Adam Levine and Maroon 5 tend to stay out of the headlines in negative gossip media, but they have stirred up quite a bit of controversy with their blood-spattered NSFW video for "Animals." The band is accused of glorying violence against women in the vid, which stars Levine's new bride, Victoria's Secret model Behati Prinsloo. Her character is stalked by Levine's meat locker-dwelling butcher, wearing now-stylish black serial killer specs. There were even sanguine photos of Levine and Prinsloo, covered in blood ahead of the clip's debut. So, yeah, there are plenty of elements that might make some people pretty freakin' uncomfortable due to the equating of sex and violence.

While the notion of former serial model dater Levine, he of the perennial 5 o'clock shadow, that handsome face, and that smattering of tattoos, as a butcher is sort of funny, at least on paper, several anti-violence groups aren't laughing.

There's a lot going on in the vid. The newlyweds also hack at a carcass and that, along with the song's sexually suggestive, "Ummm, okaaaay" yet metaphorical lyrics positing the protagonist as a hunter stalking a prey, means the video isn't sitting well. Sure, the suggestion of things not being on the up and up is obvious. But since stories of overzealous fans trying to gain access to the homes of Rihanna and Taylor Swift are commonplace, one might think Levine and co. were being capricious or cavalier about portraying a stalker-like intrusion.

And TBH, I wouldn't be surprised if animal rights groups were less than thrilled about the butcher and carcass element and that's said without a note of sarcasm.

Horley isn't the only one who is offended by the video. Helen Wardman of the U.K.'s Rape and Sexual Abuse Support Center is emphatic about the fact that "stalking and violence towards women should not be trivialized or portrayed as acceptable in the entertainment industry. This video minimizes the seriousness of this crime. It is disrespectful to victims who have to cope with the very real impact of fear and trauma."

That point is well received and may prevent you from shaking it off as "just a music video."

Of course plenty of other videos have caused controversy in relation to women's issues, all the while racking up millions of views in the past year and change.

Like Robin Thicke's "Blurred Lines," which caused his career to soar and eventually sank his marriage to Paula Patton. Ice cream cones, doe-eyed models, and several phallic images populate the video, which was seen as objectifying, while Thicke chalked it up as more of an ode to the wife at home, the "good girl." Patton apparently wasn't miffed about things, either. But the song and video were viewed as "rapey" by some and seen as capitalizing on the confusion between "yes" and "no."

Rihanna pole danced in her "Pour It Up" video but then again, she is Rihanna and she does whatever she wants and doesn't care who thinks she is a bad role model or oversexualized because she makes it rain. Still, it didn't stop the outpouring of outrage over the perceived glorification of women dancing for men and for dollar bills.

Lily Allen's comeback track "Hard Out Here" was meant to make fun of sexism and double standards running rampant in pop music, but it had the reverse effect, with critics lambasting the send up of already outrageous hip-hop videos and further objectification with the plastic surgery-themed opening.

So obviously, Maroon 5 aren't the only ones that have stirred up groups that fight for women's rights and support women's issues. But the fact that several beloved pop acts have dropped videos that inspired such fierce reactions means that some artists might want to think long and hard about the treatments that directors submit and to make sure they can withstand the heat, because it will come.

More like this
Adele’s All-Female Lineup Includes Kacey Musgraves, Mahalia, & Self Esteem
By Shahed Ezaydi
Travis Alabanza On Not Fitting In
By Sam Ramsden
Rylan Clark Is Ready To Party
By Sam Ramsden
Yinka Bokinni Recalls Terrifying Truth At Heart Of 'How To Hire A Hitman'
By Frances Stewart
Get Even More From Bustle — Sign Up For The Newsletter