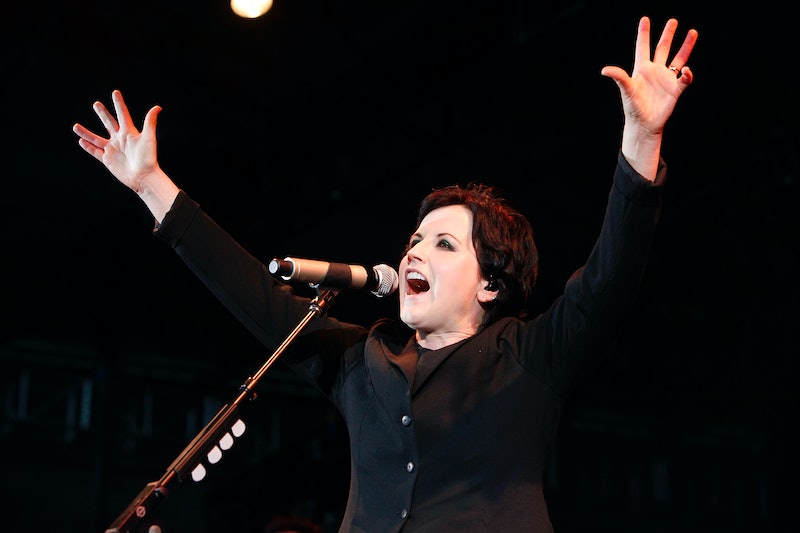 It's been 20 years since The Cranberries released their smash hit album No Need to Argue. The Irish chart-toppers got totally stuck in your he-eehh-d, in yar hay-ay-ay-ed in 1994 with singles like "Zombie, " "Ode to My Family" and "Ridiculous Thoughts." Whether you were a tween who was stealing their CD when your older sister wasn't looking for a full-fledged Gen X flannel-wearing rebel, The Cranberries and No Need to Argue were a major part of your '90s experience. Just writing about the album brings back memories of jeans torn at the knee, sweatshirts tied around the waist, and discovering Manic Panic hair dye.

Though No Need to Argue is debatably The Cranberries' best album, their entire '90s catalogue is like a time capsule of all my favorite songs, fashions, and movies from the '90s. In fact, The Cranberries were so prevalent in the '90s that their songs appeared in numerous film soundtracks and they performed on screen in a handful of popular television series. Three tracks from No Need to Argue appeared on Party of Five and Everybody Else Is Doing It, So Why Can't We? provided the background music for countless on-screen first kisses or any scene that could be dubbed "moody." In short, The Cranberries were the '90s. Don't believe me? Let's take a look at where their most popular songs landed on the big and little screen.

This may very well be The Cranberries' most popular song, if not for the fact it's less angsty than "Zombie," it's probably because it appeared in almost every movie and TV show in the '90's including unlikely action-adventure flicks like Mission:Impossible and rom coms with the classic "kid hires a female escort for his dad" trope like Milk Money. Pretty much every genre in the '90's had this song. Take a look.

The Next Karate Kid

Boys on the Side

Ah, the days of patiently waiting for the Internet to connect.

Surprisingly, this song only appeared in the trailer. No wait. This song is in every trailer. I take it back.

If Elton didn't turn into a total creep after singing this song to Cher in Clueless, I'd have much fonder memories of it. However The Cranberries most pivotal moment in the film was definitely...

Way to go Elton, you totally ruined the Cranberries for so many fans of Clueless.

If there was ever a Cranberries song that would make me want to get "The Rachel" haircut and grab a case of Crystal Pepsi, it's this one. Not only did it serve as the soundtrack to my own coming-of-age, it was featured in the summer classic Camp Nowhere.

I wonder if Andrew Keegan plays the song in that religion he founded recently...

Just some MTV Unplugged to really get you in the mood for...

"Ode to my Family" and "Empty" were also featured in the series. Is it me or was this "Party" kind of a buzzkill?

Oh the angst, the ANGST! Kinda makes you want to buzz your hair and wear a belly shirt, no?

Ergh, someone find me my crushed velvet beret! Naturally these super '90s songs from the ultimate '90s band appeared in the sountrack to the ultra '90s movie about '90s music Empire Records.

I think I was a combination of Deb and Corey. How about you?

Obviously The Cranberries and Charmed were a match made in late '90s heaven. The deep red lipstick, the ealy TRL-era music video camera tricks, and over-abundance of smokey eye makeup were just so very perfect. Thr Cranberries also performed "Promises" and "Animal Instinct" for the show.

Soundtracks in the '90s without The Cranberries would be like Cher without Dion. Thankfully that's a reality none of us ever have to live in.