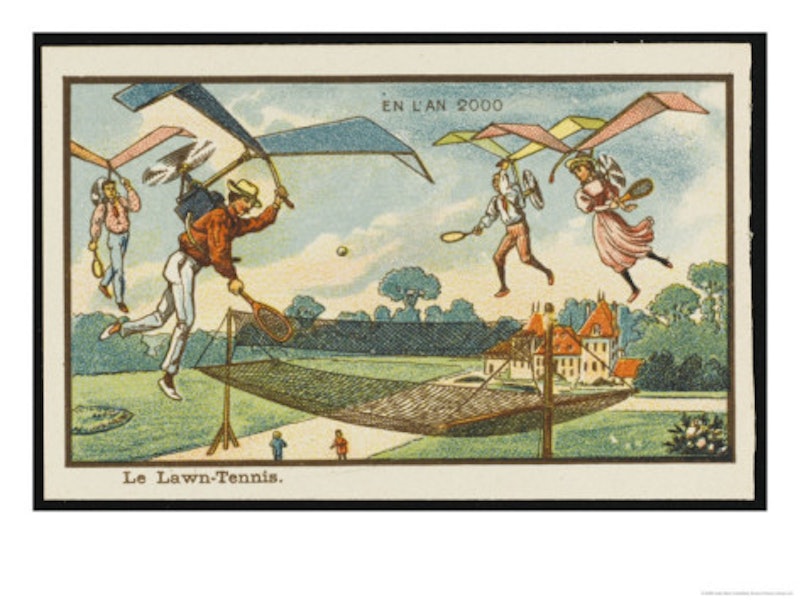 If we can learn anything from these 1900s French postcards predicting what 2000 would look like, it's that our imagination is a lot cooler than reality. Sure, a lot has changed in the last century. The Industrial Revolution completely transformed the landscape of much of the world, Henry Ford's cars replaced horse-drawn carriages, and computers made our mere human brains feel endlessly insufficient.

But despite all the phenomenal leaps human society has taken over the last 100 years, we still haven't quite met the standards that the French set for us at the turn of the 20th century. In 1899, 1900, 1901 and 1910, French artists like Jean-Marc Côté created a series of drawings predicting what life would look like in 2000. And to be perfectly honest, it is difficult to say whether we have failed to meet or completely blown past their expectations.

In the early 20th century, our French compatriots surmised that the year 2000 would bring with it some pretty radical changes. And while our changes have certainly been profound, I feel that the French of old may be disappointed if they were to rise out of their graves to visit the 21st century. After all, we have no flying firemen, no underwater buses drawn by whales. Nor have we quite mastered the art of riding seahorses (probably because we would have to shrink or they would have to grow exponentially to make this a viable option).

But in other senses, the French of the 1900s were surprisingly clairvoyant in their predictions, and we have done them proud. Here are just a few of the best (and worst) assumptions that we made 100 years ago about where we'd be in 100 years.

So it doesn't quite look like this because using a hot air balloon in a battle isn't the best of ideas, but thanks to modern technology and aviation, we do have fighter jets!

Now that I'm looking at them next to one another, I can definitely see where the makers of these jets took their inspiration.

Sorry guys, we haven't quite gotten around to this one yet. Maybe if Uber and Lyft would stop fighting and start loving one another, we could move on to off-the-ground transportation. In fact, I'll say it now — whichever one of those companies is the first to invent the air cab is the one that will win the transportation battle.

It seems that our 1900s selves were absolutely fascinated by air travel. I guess a couple millennia of being bound to the ground will do that to you, though. In any case, we haven't managed to attach jet packs — or wings, in this case — to our firefighters and send them out to fight flames yet. This, however, seems like a very useful invention that someone should start working on yesterday.

See what I mean? Really obsessed with being in the air. But! This one we've actually come closer to achieving — Amazon clearly knew what it was doing when it started considering drone delivery. Perhaps they were taking tips from the French innovators of the 1900s.

See, they even look kinda similar! And with 30-minute delivery times, who cares if there's a person to hand you your package.

Of all the crazy ideas the French had, this one worries me most. I'm unclear as to what "interactive breeding" really means, and even less clear as to what is happening inside the contraption that spits out chickens. I'm not sure I want to know.

If these 1900s characters lived in our day and age, they wouldn't be complaining about GMO's. Organic produce was so last century. I find it strange that a country known to produce some of the best food in the world aspired to replacing coq au vin and creme brûlée with chemicals. But I guess when you're bored, you're bored.

Which apparently, in the 1900s, they hoped would become "birding."

Unfortunately, we have yet to discover giant seahorses, mermaids, or the Loch Ness monster. But we'll keep trying.

You know, it's really heartening to see that in the midst of all their imagination for the next hundred years, they also kept practical science in mind. While we still don't fight bacteria by projecting them on a wall and stabbing them, modern medicine has come a long way since 1900. It really is too bad, though, that this technique wouldn't work for Ebola.

In what can only be described as the most boring class ever, the French of the 1900s imagined a scenario in which teachers fed books to machines, that then, ostensibly, read the text to individual students wearing headphones. Perhaps this was the basis for online education.

Sorry, no whale bus, but the good news is, we have submarines!

And I would argue that our modern take on underwater transportation is far superior to the notion of strapping a car to a giant marine mammal. But that's just me. Guess we should start sketching for 2114.