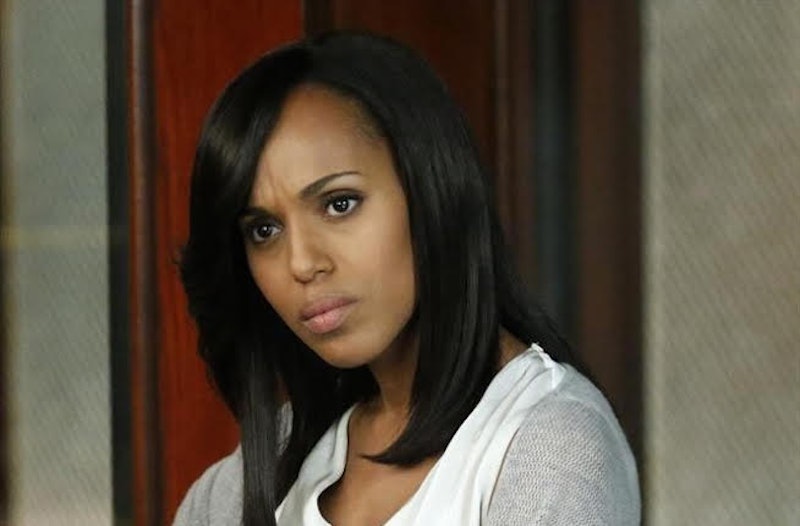 So it's a burning question on everyone's mind: Does Olivia love Jake? Maybe, maybe not, but we all know she'll go back to Fitz eventually; it is Scandal's most fundamental law: Olitz cannot be stopped, not by secret government agencies or the threat of congressional hearings or even a bullet to Fitz's brain that should have killed him. But let me say this: It's getting really, really hard not to get on Team Jake right now in the fourth season of Scandal. Like, really hard, guys.

Jake is probably the best of the guys we've seen Olivia with — which is sort of concerning considering he originally romanced her while assigned to spy on her and using numerous hidden cameras in her apartment to do so. But he's also protected her whenever he can. He spent several months in a B6-13 hole for her. He tells her things she doesn't want to hear but needs to, and he supports her when it counts. And he loves her, obviously, but that just proves he's intelligent. And yes, he's done lots of terrible things — I have still not completely forgiven him for killing James — but when it comes to Olivia, he's been pretty great.

Even more substantially, he's much better than her other boyfriends have proved to be. Unlike Edison, he can actually keep up with her and deal with her darker sides. And unlike Fitz, he's never been borderline emotionally abusive or acted like a whiny man-child. And, you know, he's not married.

Plus, their chemistry when they're together is off the charts. That moment when she took her coat off tonight...I mean, damn.

A part of me will never forget my allegiance to Olitz that was cemented in season 1, and so a part of me does really want Fitz and Olivia to get back to a place where it makes sense for them to be together in some capacity. And more importantly, I want Fitz to get back to being worthy of the amazing-ness that is Olivia Pope. And to stop doing things like ignoring her wishes and treating her like crap. And... actually why do we root for them, again?

I know they'll wind up together eventually — they're already talking, after all, and from there, history tells us it's just a matter of time. I hope when it happens, it will be in a way that doesn't gloss over the problems with the relationship in the past and actually is somewhat healthy. But mostly, at this point, I'm just hoping that Olivia's relationship with Jake can last for as long as possible. Because right now, they are kind of the best.