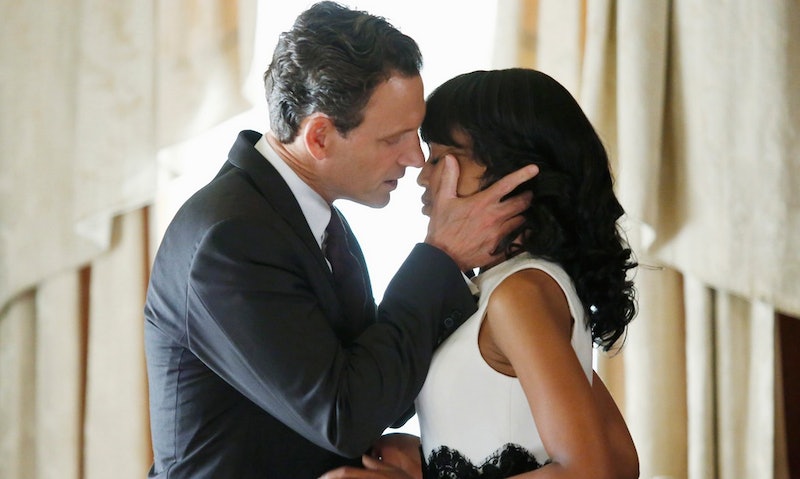 Now that the white hats are back on and the red wine is poured, Scandal fans already want Fitz & Olivia back together. In the Season 4 premiere, Olivia and Fitz had little interaction together, as the episode was more about what was happening around them. Olivia was still with Jake, Cyrus had a full head of hair, Mellie and Fitz were having a very serious conversation on the White House balcony — "When you see her, you'll tell me," am I right? — but Olivia and Fitz didn't have a "moment" until the last few seconds of the episode. And man, was that pinky flinch tempting or what?

Even though Olivia and Fitz aren't together at the moment, it feels like it is only a matter of time until a really intense, yelling turned make-out scene happens between the two of them, since it always does. In the past, Olitz has weathered many "we're over" moments, but they still always seem to return to each other. For some reason, Olivia and Fitz together just doesn't sound right — at least not now. In fact, I would even go as far to say they should not get back together for a while, and I've got five solid reasons why.

Mellie was the star of the show during the premiere of Scandal. She has always had great one-liners, and has always played a hand in the happenings around the White House, but this time around it feels all about Mellie. If Fitz and Olivia get back together, we could lose screen time for Mellie's new "f--k it" attitude, and that would be a travesty.

Olivia and Jake are just so much easier! And they look great together... and he really cares about her. I know these two will never make it in the end, but while they are together, can't we just enjoy Scott Foley, please?

It adds to the anticipation

Who doesn't love a build-up of tension between Fitz and Olivia? We've seen it before in past seasons when you're sitting on the edge of your seat wondering "will they or won't they" to the point that you fall off of your seat. So let's allow that intensity between them to build, shall we? After all, we know...

We know Vermont is going to happen

Maybe it won't be Vermont. I think they could be very happy outside of D.C., in the suburbs, too. But if they want to talk jam, then they can talk jam all they want. At the end of the series, these two are bound to end up together, so there is no need to rush into things.

Abby can stay in the White House

Let's give this girl some well-deserved screen time. She was a force at Pope & Associates, and probably will return to Olivia eventually, but she deserves this job in the White House. Plus, her hair has never looked better.