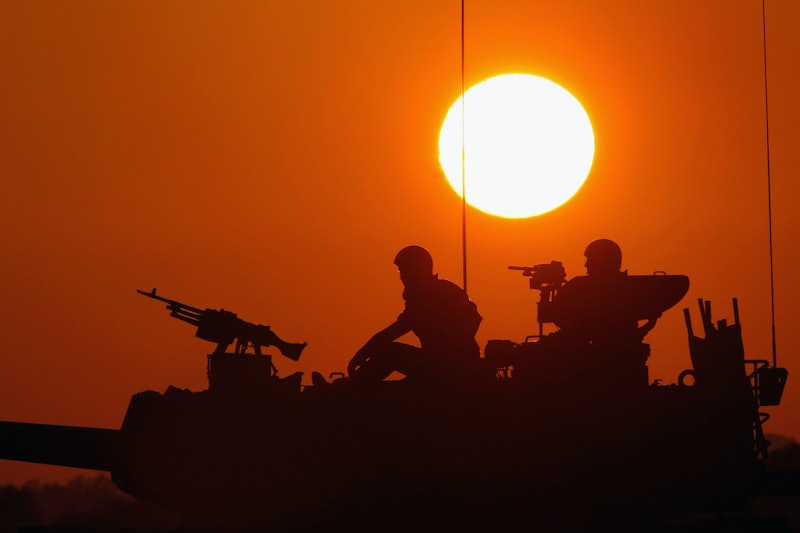 Top White House officials disclosed Tuesday that U.S. missile strikes could hit Syria as early as Thursday. President Obama and his aides have been deliberating the appropriate response since determining that, last week, Syrian President Bashar al-Assad chemically attacked his own people.

At least 355 Syrian citizens have been confirmed dead from the attack, with thousands more exhibiting symptoms of "neurotoxicity" (defined as when toxins have harmed the brain and/or nervous system). Those who have suffered neurotoxic poisoning can be affected for the rest of their lives, and often suffer from degenerative illnesses like Alzheimer's as a result. Hundreds of children fell victim to the attack.

Yesterday, Secretary of State John Kerry announced that the U.S. was certain the attack came from Assad, and that it was nothing less than a crime against humanity — meaning America's military response was pending. Now, officials are saying that an imminent U.S. missile strike wouldn't be for the sake of overthrowing Assad, but would be intended to send the message that the attack was a clear violation of international and humanitarian rules, and has consequences.

“The options that we are considering are not about regime change,” said White House spokesman Jay Carney. “They are about responding to the clear violation of an international standard that prohibits the use of chemical weapons.”

Military intervention is an expected but controversial response for the United States. Critics point to the fact that "humanitarian militarism" — violence with the aim of enforcing humanitarian standards — tends to end more civilian lives than it saves. China and Russia have already compared the situation to what preceded the Iraq War, and pointed out that the U.S. did not have the evidence required then —or now — to perform such an intervention.

The Dow Jones average plunged even lower Tuesday, after stocks fell immediately after Kerry's press conference Monday afternoon. Critics are concerned that a conflict could disrupt oil production in the Middle East, which would affect oil prices. The Volatility Index, considered the best predictor of fear in the market, also spiked in response.

Other critics, like Republican senator John McCain, have blamed America's lack of clear stance in Syria for the attack.

President Obama said it himself last year: "We have been very clear to the Assad regime, but also to other players on the ground, that a red line for us is [if] we start seeing a whole bunch of chemical weapons moving around or being utilized. That would change my calculus." The administration has insisted that the U.N. must help lead the demonstration against Assad's breaking of international humanitarian code.

The United States hasn't used the word "genocide" to describe the civil attack, but the Arab League supported the missile strikes Tuesday, citing "the violations and crimes of genocide that the Syrian regime has carried out for over two years." Support from the Arab League for a Western attack is crucial in order to avoid anti-Western aftershocks reverberating throughout the region.

France and England have both seemingly placed themselves in the ring, publicly condemning Assad's actions and hinting that they could join U.S. troops without UN approval.

Syria's deputy prime minister has warned against U.S. invasion, saying that the country will take steps to defend itself, and that attacking them will not be easy. He also noted that such a strike could trigger "chaos" and threaten peace worldwide. Iran agreed that an attack would "engulf the entire region."

The leader of the rebel group Free Syrian Army has demonstrated his support for Western airstrikes, claiming that without retaliatory action, Assad could potentially kill tens of thousands of more people.