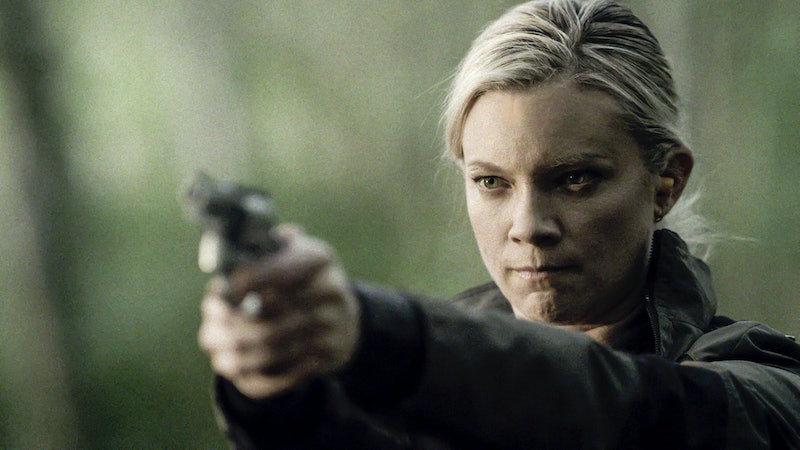 How far would you go to escape an abusive ex? Would you move away? Leave behind your entire identity — friends, family, career — to protect yourself and your loved ones? Could you kill them? These are the questions poised to protagonist Meredith Redman in the beginning of Lifetime's new movie Run For Your Life , which is based on a true story — at least in part. The film is based on Katherine Kotaw's memoir Quicksand: One Woman's Escape From the Husband Who Stalked Her and in an interview with Bustle, Kotaw says, "Writer Benita Garvin and Producer Anne Carlucci deliberately took liberties with my story to protect my identity and exercised some creative license in adapting a narrative to a TV script. Both stayed true to the core message that inspired me to write Quicksand: One Woman's Escape from the Husband Who Stalked Her, which is this: domestic violence is not the domain of the lower-classes or weak-willed. It can happen to anyone and be inflicted by anyone. Run For Your Life takes a huge step toward shattering the myths surrounding domestic violence."

Starring Amy Smart, the movie tells the story of Meredith, who, endlessly stalked by her dangerous ex-husband Robert and unable to find real protection for her and her two daughters under the law, realizes that she only has two choices, to run away and make her daughters fugitives, or kill their father. It was the very same question Kotaw had to ask herself when she found out her ex-husband had hired a hitman to kill her, and that the laws of the U.S. and Canada could do nothing to protect her.

Lifetime's movie could not come at a more potent time. Domestic abuse has returned to the center of a renewed national debate and conversation thanks to NFL's complete bundle of the Ray Rice scandal — just one among many in the league —and the graphic video behind it. Even scarier? The victim blaming that followed. But it inspired a national conversation under the hastag #WhyIStayed, which helped put the pain, abuse, and fear domestic violence victims experience everyday at the forefront.

Run For Your Life is not a light film. It shows the effects, both physical and emotional, of domestic abuse and the way the country and government can fail its victims — without any Hollywood veneer. The camera angles are Scandal-esque, using jarring flashbulbs and quick cuts, but the message is clear: these women are being stalked, and not by paparazzi. And Lifetime doesn't hold back on showing the brutality of physical spousal violence. Smart's makeup-created injuries may be fake, but the story she represents is real.

Kotaw, who is now CEO of Kotaw Content Marketing, was weary at first when Lifetime approached her about turning Quicksand, which is written under a pen name, into a movie.

"I didn’t want to publicly revisit a past I had shed in private. I didn’t want the old me interfering with the new me I was revealing in social media for the first time," wrote Kotaw on her company's blog. "Then I asked myself, 'What are you afraid of?' That people would judge me harshly for my life choices? Yes. That the movie might rile my ex? Yes. Are these legitimate fears? Yes. Are you going to let these fears stop you?'"

Eventually, the decision came down to her two daughters. Their response was instant. "They were excited, almost giddily so. Who would play me? Who would portray them? What would we wear to the premiere? Can we go shopping now? They knew the risks. They understood the fear. But they chose fearlessness. And, I’m happy to say, I did, too," she says.

Kotaw tells me that she was prepared not to like the movie, and to find it painful to watch. "But the movie actually focuses on the least painful part of my story, the true horror happened before my daughters and I left," says Kotaw. "We teared up at the end, but they were happy tears."

The movie, which premieres during National Domestic Abuse Awareness Month, is also being backed by the Joyful Heart Foundation, founded by Mariska Hargitay and the NO MORE campaign. Kotaw said that, as serious as the movie is, she hopes the message viewers take away is a positive one.

More like this
16 Novels That Paint A Realistic Portrait Of Abortion
By K.W. Colyard
What Colonel Tom Parker Was Really Like
By Morgan Leigh Davies
'The Undeclared War' Spotlights The Real-Life Threat Of Cyber Attacks
By Maxine Harrison
Sparks Fly Fast & Furious In 'Honey & Spice'
By Bolu Babalola
Get Even More From Bustle — Sign Up For The Newsletter