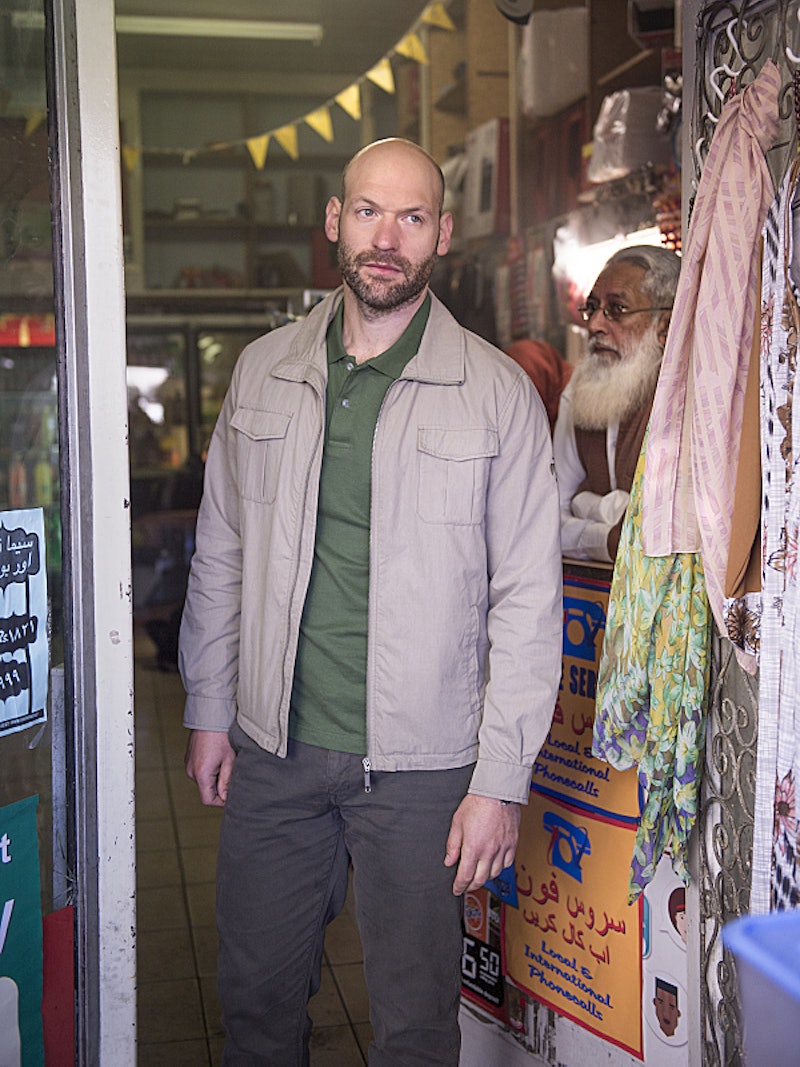 To me, it seemed that Homeland 's Sandy Bachman had all the makings for a major character: charisma, mysteriousness, confidence in the field — and the fact that Corey Stoll has quite the healthy resumé (recent credits include This Is Where I Leave You and House of Cards) didn't hurt either. Coming into the Season 4 premiere of Homeland knowing virtually nothing, I naturally assumed he'd be sticking around — but I was wrong, in a major way: because five minutes before the episode's end, he's — SPOILER ALERT — getting beaten to death by a huge, angry mob.

How did we even get here? We get our first glimpse of Sandy as Carrie talks logistics with him over high-tech CIA video chat (which is somehow much cooler than the Skype she uses to contact her sister/daughter mere minutes later in the episode), and he's the one who provides the intel on their target, Haissam Haqqani. The intel comes courtesy of his contact, who has helped them to track down and kill several people so far. And as Haqqani is number four on their hit list, they decide to take their opportunity and bomb, regardless of any civilians that may be present.

When Carrie presses Sandy for information on who his contact is, he plays his cards close to the chest, claiming that they're on a need-to-know basis — that he gets his information in return for anonymity. He seems pretty satisfied with the deal, and for a while it seems he should be. But as the episode wore on, it became more and more clear just why this informant was so adamant to stay anonymous: it would seem that they totally set up Sandy, and by extension, the agency.

Not only did the informant manage to persuade the CIA to bomb a barn with a whole wedding reception's worth of innocent people present, but suddenly Sandy's cover is mysteriously blown, his face is all over the news, and an exponentially-growing angry mob is out to get him — add it all up, and I'm smelling some serious rat.

As everything went to hell in a handbasket, I had to wonder: Just who is this informant? Why are they helping the CIA kill off their hit list? What's their master plan here? Did their relationship with Sandy go beyond that of informant and field agent? Or was Sandy nothing more than a pawn in their greater game? Who are they working for? Or with?

We got hints here and there — Quinn notes that Sandy's always disappearing at odd times, presumably to meet them (though Sandy cites a faulty digestive tract, gross), and Pakistan's American ambassador guesses that they must be someone who's high up in the Pakistani government, which Sandy doesn't exactly deny.

Whoever the informant is, their motives are deliciously murky, and I have a feeling they may just factor into the rest of the season in a very major way.

More like this
20 Photos Of "Beefy" Jeremy Allen White To Tempt You To Watch 'The Bear'
By Radhika Menon
What Is the Net Worth Of Each 'Stranger Things' Season 4 Cast Member?
By Hugh McIntyre
Everything To Know About The Flash Season 9
By Brad Witter
Who Is 'Stranger Things 4' Fan-Favorite Joseph Quinn Dating IRL?
By Grace Wehniainen
Get Even More From Bustle — Sign Up For The Newsletter