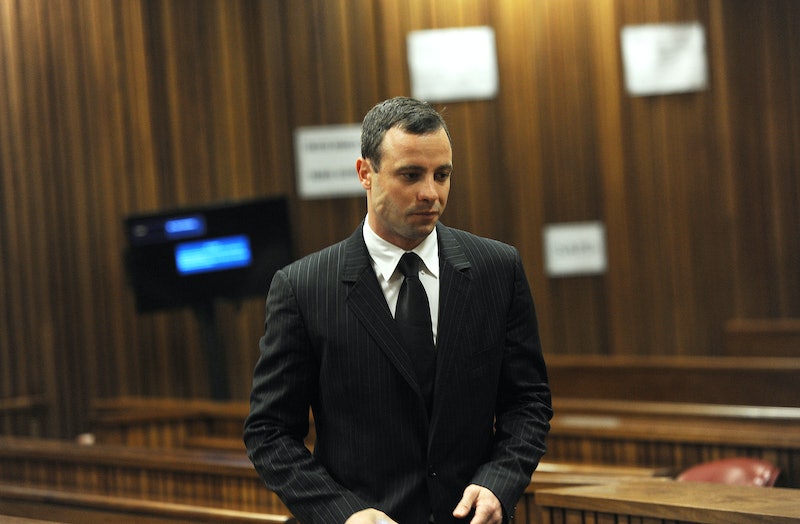 Just days before Oscar Pistorius' sentencing, a new tell-all book is presenting new allegations that could change the entire narrative. According to investigative journalists Barry Bateman and Mandy Wiener's exposé on the trial, Behind the Door, Pistorius allegedly phoned his ex hours before the shooting, but the court never saw any evidence of this because the authors claim that Pistorius' brother, Carl, had deleted any trace of that conversation off of his phone. As a result, Carl allegedly narrowly escaped prosecution himself.

Bateman and Wiener, both respected South African journalists (Oprah has called Bateman "the person to follow" when it comes to the Pistorius trial), investigate deeper into the Valentine's Day shooting with Behind the Door, which presents theories that go beyond the facts presented in the trial. One of the book's most revealing allegations is that Pistorius had spoken to his ex-girlfriend Jenna Edkins just hours before fatally shooting his then girlfriend Reeva Steenkamp. According to Behind the Door , here's what the court didn't see.

Could This Evidence Have Helped the Prosecutors?

For their investigative piece for South Africa's Eyewitness News, Bateman and Wiener spoke to a member of the prosecution team, who claims that even if these allegations were true and the phone conversation had been submitted as evidence in the trial, it would have been considered character evidence — which the prosecutors wouldn't have been able to use in court anyway.

The prosecutor also pointed out to Bateman and Wiener that it would be wrong to suggest that the state had missed such a significant piece of evidence — it's not entirely clear if this source is adamantly insisting that the allegations are unfounded or if they're covering up a possible cock-up.

Would It Have Affected the Defense?

According to Bateman and Wiener, a source close to the defense team "is at pains" to maintain that these new allegations are inconsequential. The source insists that the defense had known all along about the phone call to Edkins and had even consulted with her. In fact, the source claims that the ex-girlfriend was even prepared to testify for the defense in case the prosecution team decided to use the phone call against them. The source also asserts that Pistorius and Edkins' relationship was strictly platonic.

In response to Bateman and Wiener's request for comment, Edkins echoed the defense, noting that it had been "common knowledge" that she and Pistorius had remained friends after their romantic relationship ended. Pistorius' family released a statement on Wednesday saying that they were not aware of any tampering made to the athlete's phone that could have impacted the trial.

Pistorius will be sentenced on Oct. 13.