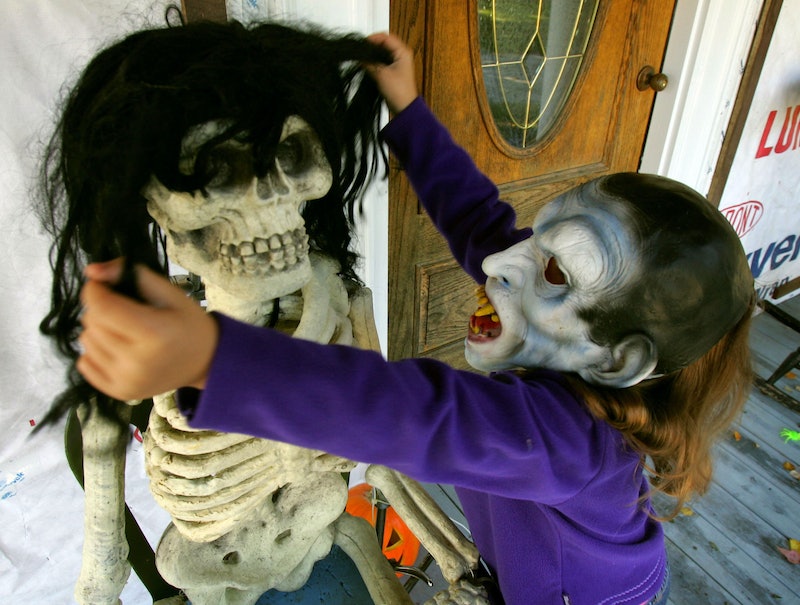 Halloween is quickly approaching, and while you’re stuck figuring out what to wear, chances are coming up with spooky Halloween DIY decorating ideas for this year’s party is probably the last thing on your mind right now. That's fine — trying to select the perfect Halloween costume can be ridiculously stressful (and sometimes, just ridiculous). But please, for the love of all things creepy, don't put this off until the last minute. Pretty soon, your only option will be to resort to using last year’s cutesy Halloween decorations, and oh, the horror. Don't act like you don't know what I'm talking about — the spider webs on the wall, the carved plastic pumpkins, the fog "mysteriously" seeping up from a witch’s pot (sorry, we all know it's really just dry ice).

Look. Halloween is supposed to be scary. People expect to be creeped out. As a Halloween hostess, it is your responsibility to go above and beyond and spook your friends — we're talking really scare the living daylights out of them. As far as I'm concerned, there's a time and a place to be classy, and October 31 is neither that time, nor that place. As such, I suggest throwing a party that will really freak everyone out, and it's shockingly easy to do! With these easy-to-make DIY decorations, your guests will be talking about this monster bash well into November.

When throwing an epic party, one must use every inch of the house, including the ceiling. Nothing sends chills up a person's spine more than an unexpected scare — and this creepy invader peeping out from the attic is definitely unexpected. Take out that terrifying old mask you have, and put it in the opening of your air vent or attic. Attach the mask to the end of a spatula (or something similar), and use a bag of sand to hold down the other end. This simple scare tactic will leave any person who comes over with that unsettling feeling that they’ve got an extra set of eyes on them... because they do.

This is one hell of a jar. The key to creating this illusion is to tape two pictures together to get the image of a flat head. Then simply tape the two ends of the photo together and place it in a jar of vegetable oil (it helps preserve the photo). Add food coloring for dramatic effect. Karin Ha at Handimania shows us how to do it.

If you have any old dolls lying around (which you probably shouldn’t, because if Annabelle taught us anything it's that they come alive at night), take them apart and throw the pieces into a glass jar. This idea by Grace, Grits, And Gardening will not only assure your safety, but will also easily guarantee that your house guests are, well, disturbed. Just don’t forget to put a lid on the jar, because I’m pretty sure they reassemble themselves when you’re sleeping.

Ever feel like someone’s watching you through the window, just beyond the sheer curtains? Well, whoever dares step foot through your door will have the same frightening feeling all night thanks to this ghoulish silhouette. Using a large black sheet of paper, cut out a zombie shape and tape it to the outside of your window. The effect works best with transparent curtains. Try this tutorial by CrafterHours.

Dim the lights, and let the bloody candles flicker. To create these creepy candles, just melt red candle wax on the brim of white candles, and watch the crimson drops fall. But be sure to lay some paper down; you don’t want to get blood on the carpet.

Let’s be real, most people have some type of spider phobia. If you don’t, you’re lying. So what better decoration to have this Halloween than a sac of spiders hanging from the ceiling? For this DIY by Hello Paper Moon, cut the legs off a pair of tights. Then put a baseball in each leg and superglue fake spiders to it. For best results, hang these somewhere people won't expect to run into them.

7. Body Bag in the Bathroom

Finally, my personal favorite, the body bag in the bathroom. I know, it’s sinister, but you’re also weirdly intrigued. This gory gag is sure to clear a room, which is why I find it best placed in the bathroom. Nothing kills a party more than a horrific restroom line. To make this DIY corpse in a bag, stuff an old T-shirt and pants with grocery bags, styrofoam, or bubble wrap. Use the same materials to create a head, then wrap the dummy in white trash bags and duct tape around the neck, waist, and knees. If this isn’t gruesome enough for you, try leaking fake blood from the seams of the body bag.