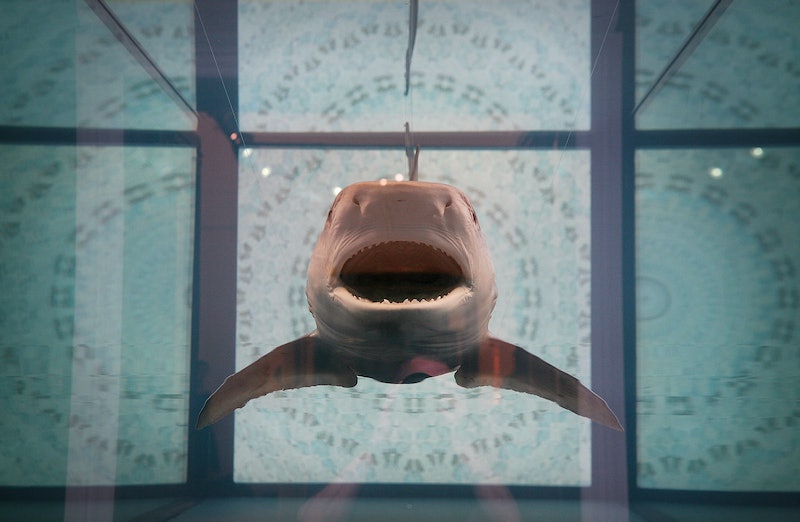 Ah, sharks. Our mysterious, beautiful, longtime foes-of-the sea (otherwise known as the reason you wouldn't go into the water for a year after watching Jaws). It turns out that these living fossils are more like us than we'd like to think. According to a new study published this week, sharks have individual personalities just like humans, and this affects how social they are — just like us, some can be the life of the party, while others are the Debbie Downers of the sea world. (No word on which is worse to run into while in the deep blue.)

The study was conducted by researchers at the British University of Exeter and the Marine Biological Association of the UK (MBA), and published in the journal Behavioural Ecology and Sociobiology on Thursday. The scientists looked at ten groups of ten small-spotted catsharks — not your stereotypical shark at all, by the way, this one's small, slender and (as the name would suggest), spotted — in tanks containing three varieties of habitat (ranging from complex and rocky, to just plain gravel).

What they found was that, though the size and number of the sharks' group were changed across the various environments, those that were social stayed stubbornly social. Those that liked being alone, on the other hand, would stay away from the others and blend their skin color with the color of the gravel — just like that shy coworker of yours at the office. As the lead author Dr David Jacoby explained to the BBC:

The results were driven by different social preferences, that appeared to reflect different strategies for staying safe. Well-connected individuals formed conspicuous groups, while less social individuals tended to camouflage alone, matching their skin colour with the colour of the gravel in the bottom of the tank.

In other words, there were the popular, social sharks and the loser, antisocial sharks — such as these familiar friends...

Clearly, Bruce is a social shark. After all, he heads the "Fish are Friends, Not Food" club, seems to hang out with his two shark buds a lot, and happily makes friends with Nemo and Dory (before he tries to eat them, that is).

Glut the Shark (from the Little Mermaid)

This guy is undoubtedly an antisocial shark. Glut, if you recall, appears at the beginning of The Little Mermaid, when he chases and attacks Flouder, who eventually traps him and blows a raspberry. Not only do we never see Glut with any friends, all he seems to do is creep around the ship graveyard. If that doesn't say loner, I'm not sure what does.

This dude is clearly social. Just look at him joking with Woody. Gaww. Although, is he in there alone? Hmm.

Lenny is a bit of a tough one. Although he's an outcast, he's friendly, and sociable, and loves to chat with potential prey. If he were in the Finding Nemo world, he'd totally be hanging out with Bruce. As it is though, I think we have to label him anti-social.

The Shark from Jaws

Much as I wish this shark were a loner — JUST LOOK AT THAT VORTEX OF A MOUTH — let's face it, he probably rules the roost. He's totally the big jock shark who shows off his giant chompers and bullies all the smaller sharks into bringing him his beers. Such is nature.