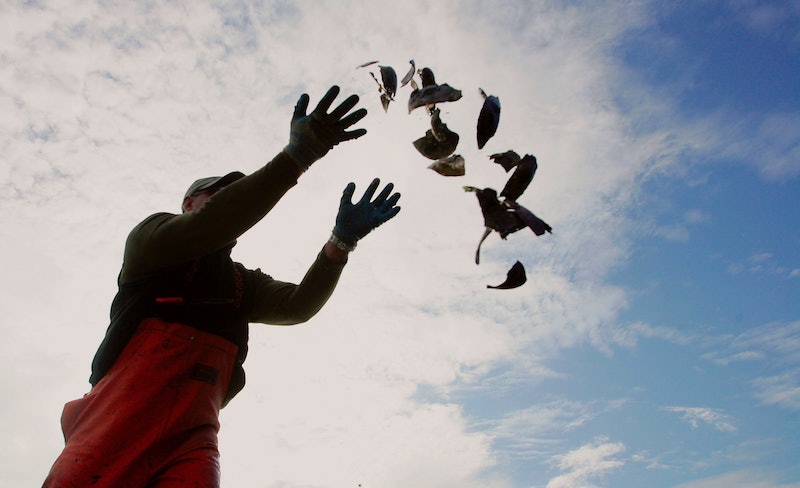 Being from Rhode Island is the greatest. People will tease you about being from the smallest state in the nation, but that's just bullying, and state-on-state crime is not okay. Whenever people find out I'm from The State of Rhode Island and Providence Plantations (its whole name, BTW), the first thing they talk about is its size. Then, putting them firmly in their place, I'm all "Do you know how corrupt we are? Do you know about Buddy Cianci? DO YOU IN FACT KNOW THAT A LOT OF OUR ECONOMIC PROBLEMS COME FROM OUR SMALL SIZE?" Then the party usually ends because I have made a scene. Side note: Do not invite me to a party unless you want to see a drunken, Rhode Island-themed scene.

It's natural to have a chip on your shoulder when you come from Rhode Island, a place so awesome most people born there never leave (lol, cool burn, me.) Haters will, as Kurt Vonnegut once said, continue to hate. I wasn't even born in Rhode Island and I've got fierce RI pride. Which is, you know, actually kind of funny because in Rhode Island I'm still considered "new to the area" because my family moved there in 1991.

Rhode Island isn't Boston; We don't put on airs. Rhode Islanders are smart, funny, brave, ridiculous people who aren't afraid to poke fun at themselves. We love seafood, Italy, setting our rivers on fire for sport, and failing to indicate when we plan on changing lanes while driving on 95. Here are 13 more reasons why people from Rhode Island win at life.

1. It's Called The Ocean State For a Reason

We got more beaches than cats got buttholes! Which is an example I should have thought through, really on account of most cats just having the one. But anyway, Rhode Island's got over 400 miles of ocean coast. We've got so much extra ocean that we wear it as pants and sometimes skirts.

Clams, when they're alive and tongue-having, are terrifying. Rhode Islanders having been murdering them, breading them, sculpting them into balls, and deep-frying them since before your home was deeply into Tom Selleck. That's a long-ass time, yo.

No, I don't meant we're smart because of all our impressive institutions of higher learning (Brown, RISD, URI, PC) we're smart because we understand that using the word "wicked" to mean "very" is arguably the greatest regional slang ever coined. Second only to calling the bathroom the "lav", and the water fountain the "bubblah". Basically what I'm saying is that RI is like Hogwarts only, instead of being magical, the people are kind of aggressive and really, really like Dunkin Donuts.

Milk? That noise is boring-ass cow juice. SWEETENED COFFEE SYRUP STIRRED INTO MILK AND STIRRED UP REAL NICE? That is the manna of the gods and also our state drink. Get on with your bad self, coffee milk.

Okay cops just do their job. Brilliant cops do it dancing.

Providence is arguably the only city in the world that is very, very, very proud to be known for a large blue bug standing on top of an exterminator's office. He has a name. It is Nibbles D. Woodaway. CLASSIC! That said, it's not too shocking that we crowd with pride about this. We are also deeply proud that Seth MacFarlane mocked us in Family Guy and that Dumb and Dumber was set here. We are a strange, inscrutable people.

Haven Brothers holds the world record for most parking tickets. God willing, its proprietors will never be thrown in jail, otherwise you will not be able to get a ridiculously delicious burger and milkshake in the small hours of the morning and that would be a damn shame.

Rhode Island isn't just Providence. It is other places too. There is South County which is so damn magical and beautiful that you'll be all "THE HELL IS THIS TINY TOWN ON THE WATER I HAVE STUMBLED INTO?!" That would be Wickford. It is baller. Go to Green Ink and buy something nice. Then maybe ride a kayak or some shit.

Del's lemonade won't get you drunk, but it WILL give you a sugar high while satisfying a craving for chewing on tough bits of lemon rind that you never even knew you had.

HP Lovecraft is buried here, and Edgar Allen Poe died here. Rumor has it (a rumor that I have made up right here and now) that their ghosts prowl Thayer street each night, asking people for change and using that change to buy pieces of artisanal pizza and maybe go to the Avon to see a movie.

BRAVO. DID. A RHODE ISLAND. REALITY SHOW. If Andy Cohen and the gods at Bravo smile down up your state and kiss it with such a gift, you know you are one of the chosen people.

If you've spotted a hot guy, one of your friends will know him. If they do not, you will quickly discover that you, in fact, knew this hot guy and used to bathe together as infants. Sometimes everyone knowing everyone sucks, but it definitely has its perks.

13. Because We're Too Cold To Hold

In a nation of huggers, Rhode Islanders are all "Oh, hey...yeah, high five?" We're just as loving and sweet as other people, but dude, seriously, I saw you five minutes ago – why do you wanna hug me? What is this, butt-touching time and nobody gave me the memo?

More like this
13 Summer Solstice Quotes To Celebrate The Longest Day Of The Year
By Sadie Trombetta
On TikTok, Orange Wine Is The Varietal Of The Summer
By Madeleine Aggeler
Is The Insta-Famous Always Pan Actually Worth It?
By Jessica Goodman
Taco Bell Announced A Crunchwrap & Tostada Made With Cheez-Its
By Emma Garza
Get Even More From Bustle — Sign Up For The Newsletter