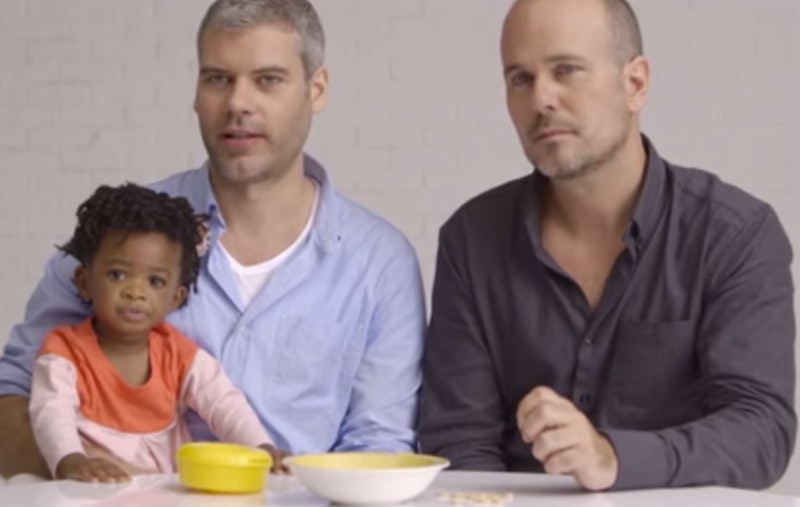 Who would have ever thought that Cheerios would be a force for progressive social good? Over the past year, the company's ads have given us a lot to be happy about, and the latest Cheerios ad, featuring a gay couple and their adopted daughter, might be the best so far. Go Cheerios!

As you can probably guess from the actors' thick Quebecois accents, the ad was made for Canada, not the US, but it's the sort of thing that people everywhere can appreciate (unless, of course, they have no soul). The starring characters, André and Jonathan, met on a blind date and fell in love instantly. They both wanted to be parents, and eventually decided to adopt a child together.

"We couldn't keep all this luck and love for ourselves," André explains. "We needed to share." And that is how their daughter, Raphaëlle, came into the picture. It's so cute!

And yes, I am aware that this is an effort by a giant corporation to make money. I am not an idiot. But still Cheerios has been pretty solid this past year when it comes to standing up for what's right. After their ad featuring an interracial couple and biracial child was attacked so viciously they had to suspend YouTube comments on the video, Cheerios stuck by the spot. They doubled down on their support for the ad and interracial families by hiring the same actors to shoot another commercial to air during the Super Bowl.

Plus, their parent company, General Mills, has also been vocal for LGBT rights.

All of which just makes this ad cuter. Enjoy!

More like this
Why You're Seeing Green Bandanas At Abortion Rights Protests
By Lexi Inks
How To Come Out Online, According To Trevi Moran
By Melanie Mignucci
American Girl Doll Memes Are Going Viral On Instagram & Tiktok
By Emma Carey
Aesop's Queer Library Is Open
By Tomi Otekunrin
Get Even More From Bustle — Sign Up For The Newsletter