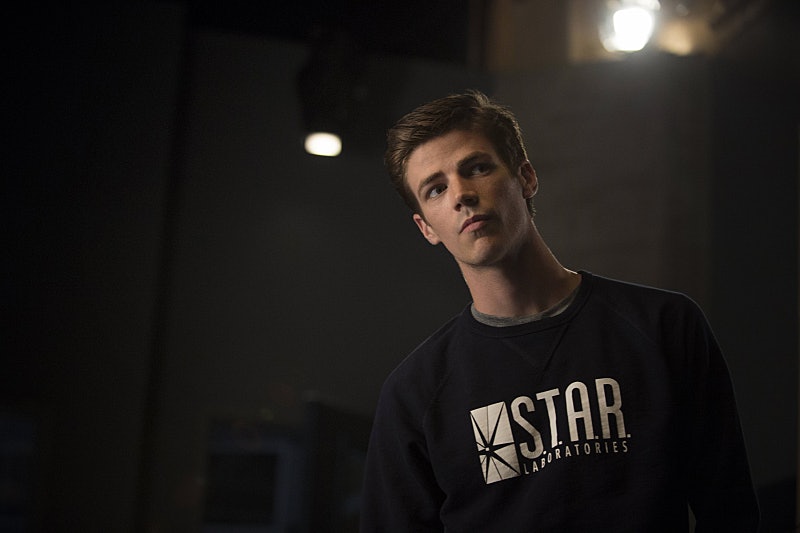 I am so excited for The CW's The Flash I'm not even going to bother denying it or trying to hide it anymore. Considering — in my opinion — Arrow is the best comic book show on television right now, I can only assume that The Flash will win me over right away too. But just like Arrow, a show that has certainly has taken liberties with its characters, how will the television version of The Flash differ from the comics? The Flash already has a well-established back story from the comics that have been developing the character since 1940. What's going to change from page to screen?

Originally, The Flash was slated to begin as a "backdoor pilot" during the second season of Arrow, right at the end of Barry Allen's arc on the show. What's a backdoor pilot? It's an episode that sets up a brand new world and new characters within an already established show — kind of a veiled way to make a new show's pilot really cheap. Think back to that young Lily episode of Gossip Girl with Brittany Snow, or every single time CSI or NCIS has decided to begin a new spinoff. The CW executives loved Barry so much, though, they scrapped the backdoor pilot and ordered a real pilot for the series. In doing so, they gave The Flash much more time to introduce the character and flex its fast muscles. This also gave the writers more material to play with and the opportunity to create a whole new television world for Barry. Here's what we know so far about the new changes the show has made.

In the comics, Central City is supposed to be in Missouri, but considering all the trips that Felicity takes back and forth between the two places, we can sort of guess that it's not in Missouri, but closer to Starling City.... wherever that actually is (San Francisco, Massachusetts, Great Lakes, seriously take your pick, I'm pretty sure there is no wrong answer). Central City is one of these towns that is everywhere and nowhere at the same time. Making it ambiguous gives viewers something to relate to.

Last season on Arrow, we saw the beginnings of The Flash — when Barry was struck by lightning shortly after returning home from Starling City. This left him in a coma for nine months, and when he wakes up he discovers that he has new superhuman speed.

In the comics, however, it goes down a little bit differently. There's still lightning, yes, but it actually strikes a case of chemicals at the police precinct where Barry works as a scientist. The chemicals spill all over Barry, and he acquires superhuman powers that way. He also keeps his powers a secret from just about everyone, including Iris (more on her in a second).

Barry in the comics is much older than Barry on the TV show. In the comics, he's already engaged to Iris West, while on the show they'll just be friends, with Barry harboring secret feelings for her. Also, The CW's Barry becomes the foster-son of Iris' father, but I'll leave the reason why up to you to find out tonight, because I feel bad spoiling everything, you know?

So, to put it bluntly, there is a whole lot of time travel in The Flash comics. Enough to make your head spin and wildly confuse the casual Flash reader. Barry has probably the coolest workout device ever, the cosmic treadmill, that can send him through time and space. But it's doubtful that the show will rely heavily on time-traveling superheroes, because that opens up a whole different can of worms (and might turn some viewers away). But, the show's brand new character, Harrison Wells, not only has a back story shrouded in mystery, but showrunner Andrew Kreisberg hinted to Zap2it that Harrison might also have dabbled in time travel. So I guess we'll see where this goes, huh?

Also to note, in the pilot (which include some pieces that we've already seen in the trailer for the show) it's revealed that Barry's mother is murdered. She's murdered because of [spoiler alert, I guess] time travel. So for The Flash to flesh out this backstory, they have to talk about time travel. Unless they go a completely new route and rewrite all of Barry's backstory, which actually wouldn't be so bad.

THE STRANGE CASE OF THE THAWNES

Spoiler alert, you guys. Barry's actually got a twin brother that was separated from him at birth. And yeah, this brother, Malcolm Thawne, grows up to be a supervillan. Considering in the promo we see a family picture that only has three family members — Barry, mom, and dad — maybe come Season 2 or 3 we'll get this family affair. A character named Eddie Thawne (above) will definitely appear on the show, who could easily be related to Malcolm. My fingers are crossed, because this is one comic storyline I'd definitely like to see transfer to TV.