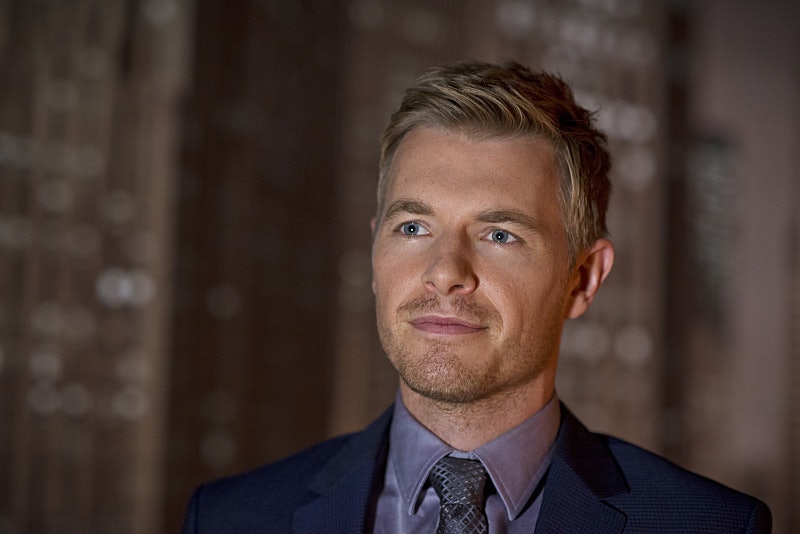 The Flash, the CW's latest DC Comics-inspired series, is set to premiere October 7. Like any good superhero saga, the show promises plenty of cool special effects and thrilling stunts. But for Flash fans already in the know, the show is also including some tell-tale hints that may reveal the fate of Central City's most famous residents. Like Detective Eddie Thawne, whose secret will definitely be one of the most shocking twists of the first season.

But first thing's first. Before we get to the big reveal, let's figure out who Eddie Thawne is. The character (played by Rick Cosnett) is a new detective quickly rising through the ranks at CCPD. He's also friends with Barry Allen a.k.a. The Flash (Grant Gustin) — although that friendship may be headed for trouble pretty soon. At the beginning of the series, no one really knows where Eddie came from: according to Deadline, the cop is "a recent transfer to the Central City Police Department, whose past is a mystery and who harbors a dark secret." One more thing to know is that Eddie soon begins dating Iris West (Candice Patton), the girl Barry's crushing on (and also Barry's foster sister, which is a little weird but we'll go with it). Below, Cosnett gives a bit more insight about his character.

Technically, Eddie Thawne is a new character created for the Flash TV show. But, as readers of the original comics have probably already figures out, his name sounds eerily similar to one of the most important characters in the Flash universe: Eobard Thawne. Eobard Thawne, in case you didn't read the comics, is the Flash's archenemy (he also goes by the aliases Professor Zoom and Reverse-Flash). Eddie is not the innocent good guy he pretends to be, but in fact, a supervillain. Boom.

According to ComicVine, Eobard is a genetically-engineered human from the 25th century who used (I'm not kidding) a cosmic treadmill to travel back in time to the present. His only wish was to be like the Flash (who I guess is still well known 400 years in the future), but the cosmic treadmill (still not kidding) malfunctioned and the resulting accident turned him evil and deranged. In an especially creepy twist, after the accident he also had his face rebuilt to look just like Barry Allen. He has all the same powers as the Flash — mostly super speed and endurance — plus time travel. He also wears the same suit as his arch rival, except his is yellow with a red lightening bolt—the opposite colors of the Flash's spandex.

Eobard's most famous crime was by going back in time and killing Barry's mother when Barry was just a child. Barry's mother's murder, and his father's resulting wrongful imprisonment, are the root causes of Barry's decision to devote his life to fighting crime. We don't yet know if The Flash TV show will make Eddie Thawne the murderer, but promos certainly hint that Mrs. Allen's death involved some sort of dark supernatural force, and that a mysterious man dressed in yellow was involved. When exactly the show will reveal Eddie's involvement in his "friend" Barry's tragic past remains to be seen.