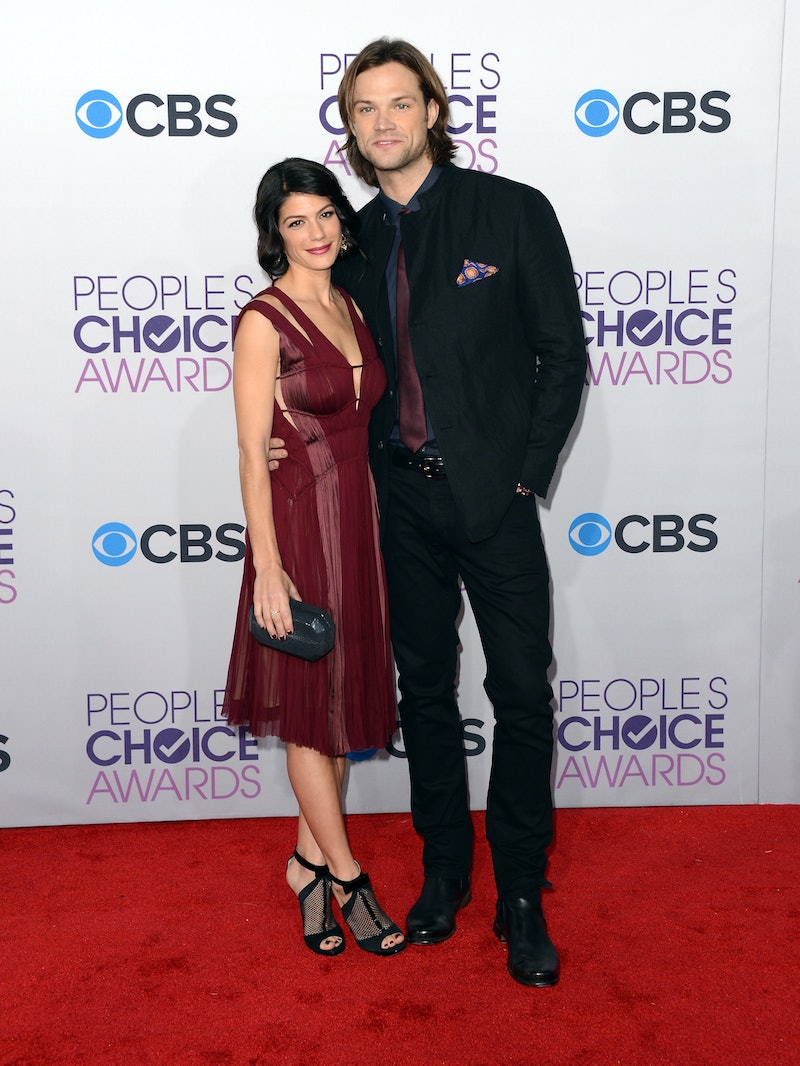 The Supernatural premiere airs on Oct. 7 and, no matter how much you try to pay attention, you keep getting distracted. You know you should be focusing on Sam Winchester, but you keep wondering: Is Supernatural star Jared Padalecki married? Of course he is — and to former Supernatural co-star Genevieve Cortese, no less.

Oh, come on. Don't look so crushed. It's not like any of this is a surprise, It's right there in his Twitter bio, which says that his "3 Ws" are "my wife, my wine, my watches." (At least he's nice enough to put his wife first.)

The two met on the set of Supernatural , when Cortese took over the role of Ruby from Katie Cassidy, who left to star on Harper's Island (and is now Laurel on Arrow). Rather than try to imitate Cassidy's take on Ruby, the creators decided to change up her personality so Cortese could make the character her own. Fans were — let's put this delicately — not pleased with the switch. So Supernatural fans might have two strikes against Cortese: one for changing Ruby's character, and another for taking Padelecki off the market.

If you're one of these fans, maybe your heart would soften if you knew how cute the Padalecki/Cortese couple is. Here are some heart-melting facts about the two of them.

Their Wedding Was Amazing

Padelecki proposed to Cortese at the Museum of Modern Art in New York City, in front of one of their favorite paintings: Joan of Arc by Jules Bastien-Lepage. (Awww.) The couple got married in her hometown of Sun Valley, Idaho, in 2010. According to Sun Valley Magazine, they had a winter wedding at The Valley Club country club, with Cortese wearing a strapless Monique Lhuillier gown. Snowy winter weddings aren't the most popular, but they make for great photos.

They Have Two Super Cute Kids

Both are apparently adorable Seahawks fans. Despite what it says on their jerseys, their names are Thomas Colton (the elder) and Austin Shepherd (the younger — they call him "Shep"). When their first son was born, they asked that, in lieu of gifts, people donate to St. Jude's Children's Research Hospital; they raised more than $37,000.

She Won't Bother You on Supernatural Anymore

Cortese has no plans to reprise the role of Ruby. When Supernatural asked her to return to play a fictionalized version of herself for a meta-episode, Cortese was reluctant because of all the backlash. Padelecki tells Zap2It, "I was like, 'Hey baby, would you be up for coming back to Supernatural ?' And at first she was like, 'No.'" It took some cajoling, and Cortese was more on board when she realized she wouldn't be returning as Ruby. "Any chance to make fun of myself," she says, "and to make fun of the industry — I'm so there." So don't expect the reemergence of Ruby any time soon, just the awesome Cortese.