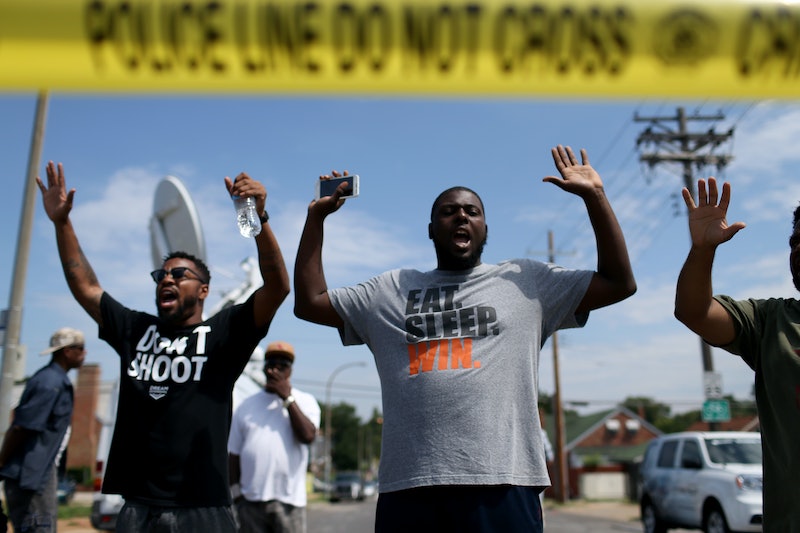 Concert goers at Saturday's St. Louis Symphony performance became an audience for an unexpected and moving tribute to Michael Brown, the 18-year-old whose death has sparked a national discourse on race relations and police brutality. Following an intermission at the concert, demonstrators at the St. Louis Symphony sang a "Requiem For Mike Brown," and unfurled four hand-painted banners commemorating Brown and his death. No complaints or arrests were made following the demonstration, and participants voluntarily and peacefully left after their two-minute song.

In a convincing display of the power of art and community, the protest involved about 50 members of the audience. Immediately before the symphony was to begin their performance of Brahms' Requiem, demonstrators decided to perform their own rendition. The peaceful protest began when a middle-aged African-American man stood up in the center of the auditorium, singing the civil rights anthem, "Which Side Are You On?" He was soon joined by a white woman, and together, they intoned, "Justice for Mike Brown is justice for us all."

After this initial display, they were joined by other audience members throughout the auditorium, from the balconies, from the wings, and from seemingly every corner of the imposing concert hall, who stood up in their concert finery — their dresses, pearls, sport coats and ties — to paint a very different picture of a Mike Brown protest.

Though St. Louis is several miles away from Ferguson, where Brown was shot, the reverberations of his death have been felt throughout the state and country, and even nearly two months after his untimely death, his memory remains emblazoned on the hearts of many activists who are still in avid pursuit of justice.

As the chorus of "Justice for Mike Brown is Justice for us all/Which side are you on friend, which side are you on?" continued, other protestors revealed four large 15-foot banners, that hung from the balcony of the hall. On one was painted Brown's face, with 1996 - 2014 reminding audience members of the tragic brevity of his life. Another read, "Rise Up and Join the Movement." On a third, the words "Requiem For Mike Brown 1996 - 2014" were painted, and a fourth, most damningly, said, "Racism Lives Here."

According to the Washington Post, the remarkably well-organized song was practiced only a few times in the hours leading up to the event.

After the song drew to a close, protestors chanted, "Black lives matter!" as they marched peacefully out of the auditorium. While demonstrators had expected some repercussions to their actions, they were pleasantly surprised to find a largely receptive audience. Many concert goers, including those who did not participate in the protest, applauded the demonstration, both during the song and as the protestors exited the premises. Even symphony members showed signs of support — conductor Markus Stenz looked on at the proceedings without any signs of being perturbed, and some musicians clapped for the protestors as they left.

At the end of the demonstration, red paper hearts fell from the balconies onto the lower levels of the auditorium. They read simply, "Requiem for Mike Brown." Shortly after the protest ended, Stenz resumed the performance.

Derek Laney, an organizer for Missourians Organizing for Reform and Empowerment, told the Washington Post that the demonstration went remarkably well. Said Laney,

It went to show that there are people among that crowd who think that the protests matter and that it’s not okay to just kill black children, and they’d be receptive to hear that message. It was a perfect moment. As we left, people were smiling and reaching out to shake our hands.

As for their choice of venue, Laney noted that the privileged population that has the opportunity to attend such concerts tends to remove themselves from the harsher realities of the world around them. But by bringing a sense of discomfort into a normally luxurious space, Laney and other demonstrators said they hoped to raise a greater sense of awareness for the struggles of the less fortunate. "You have to make a choice for just staying in your comfort zones or will you speak out for something that’s important? It’s not all right to just ignore it," Laney said.

Despite the general feelings of solidarity that resulted from the demonstration, some concert attendants were less than pleased that their evening of classical music had been interrupted. Some, notably white men and women, began shouting expletives and looked positively horrified by the demonstration.

Still, the demonstration seems to have achieved its purpose of spreading a larger message to a wider community. The St. Louis American spoke to Sarah Griesbach, a 42-year-old white woman who organized the event. Said Griesbach,

It is my duty and desire to try to reach out and raise that awareness peacefully but also to disrupt the blind state of white St. Louis, particularly among the people who are secure in their blindness.

Participants in the demonstration included people from a number of different backgrounds, including blacks, Hispanics, and white residents of the St. Louis area who ranged in age from college students to college professors. This sense of unity, Griesbach says, makes it clear that "This cannot be just a Ferguson issue." All the protestors were ticket-holding members of the audience, and St. Louis Symphony spokeswman Erika Ebsworth-Goold told Buzzfeed that she only wished they had stayed to watch the rest of the performance.