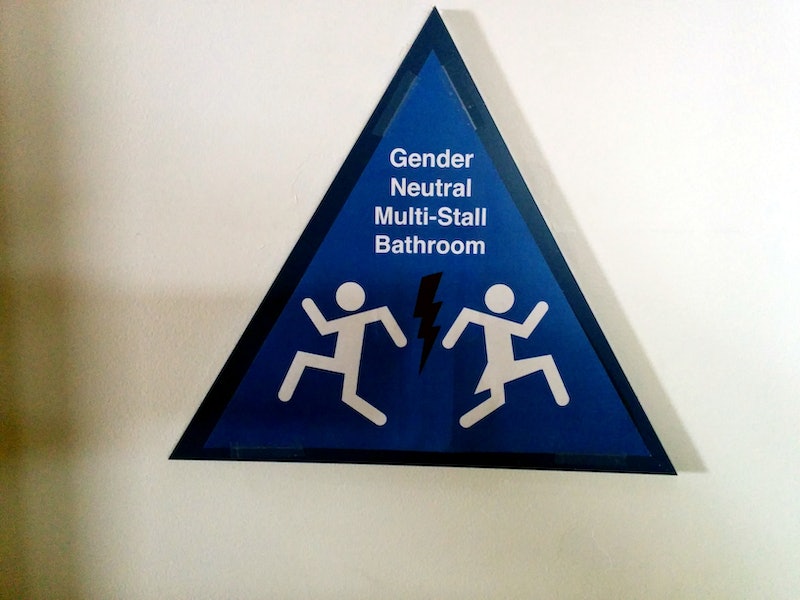 The latest college campus facility to introduce gender-neutral bathrooms, Harvard Divinity School (a constituent school of Harvard University) recently tweeted a photo of a new sign outside one of Divinity Hall’s restrooms, now labeled “All Gender.”

As seen in the picture, the bathroom sign specifies, “Anyone can use this restroom, regardless of gender identity or expression.” The sign also includes the symbols for a man, a woman, and a handicapped person, alongside a hybrid symbol that seemingly combines the traditional male and female figures. The photo, as well as the newly instilled symbol, has some people asking if this sign is becoming “the new thing” on college campuses — and the answer to that question is yes.

As with most everything related to sexual identity, the sign at Harvard Divinity — like similar signs at Northwestern University and Illinois State University — has stirred up mixed responses. While some students seem proud to be part of a college that is taking such forward-thinking action, other people haven’t been as tolerant of the idea, taking to Twitter to call it “filthy," embarrassing, or confusing.

Harvard Divinity College is only the latest in a growing number of universities to embrace gender-neutral bathrooms over the past several years. According to a recent article by the Huffington Post, more than 150 schools across the United States have installed all-gender restrooms in at least some of their facilities. And it’s not just colleges getting in on the trend. Offices, city-owned buildings, and other workplaces are all working to make their bathrooms more gender neutral.

The goal is to create a more inclusive and potentially safer environment for non-gender-conforming individuals, many of whom have had the horrifying experience of being ousted, harassed, or even attacked in traditionally gendered bathrooms. Per the Huffington Post, 70 percent of transgender and gender-nonconforming respondents reported experiencing problems in gender-specific restrooms in Washington, D.C., and 58 percent reported that they have avoided going out in public due to a lack of safe public restroom facilities in the same city. Gender-neutral bathrooms could also make life easier for people with disabilities as well. The stalls are typically more wheelchair accessible, and they allow for the assistance of a spouse or friend, regardless of their gender.

People may find the concept of non-gendered bathrooms so controversial because the practice of male or female-specific restrooms is so seared in our minds, and that the idea of entering one or the other accidentally is normally thought of as cause for embarrassment. But it’s important to remember the real purpose behind gender-neutral bathrooms. It isn’t about the symbols on the door — it's about creating the opportunity for everyone to do something as basic as entering a bathroom (an action that most of us take for granted) with the same level of comfort. And though it may take some getting used to for some, that should be a cause we can all get behind.

More like this
Gen Z Are Twice As Likely To Identify As Queer, According To New Data
By Sam Ramsden
25 Inspiring Quotes From Black Women To Celebrate Black History Month
By Kyli Rodriguez-Cayro and JR Thorpe
What The UK Blocking Scotland’s Gender Recognition Bill Means
By Sam Ramsden
The UK Government Is *Finally* Banning Conversion Therapy
By Sophie McEvoy
Get Even More From Bustle — Sign Up For The Newsletter
From hair trends to relationship advice, our daily newsletter has everything you need to sound like a person who’s on TikTok, even if you aren’t.