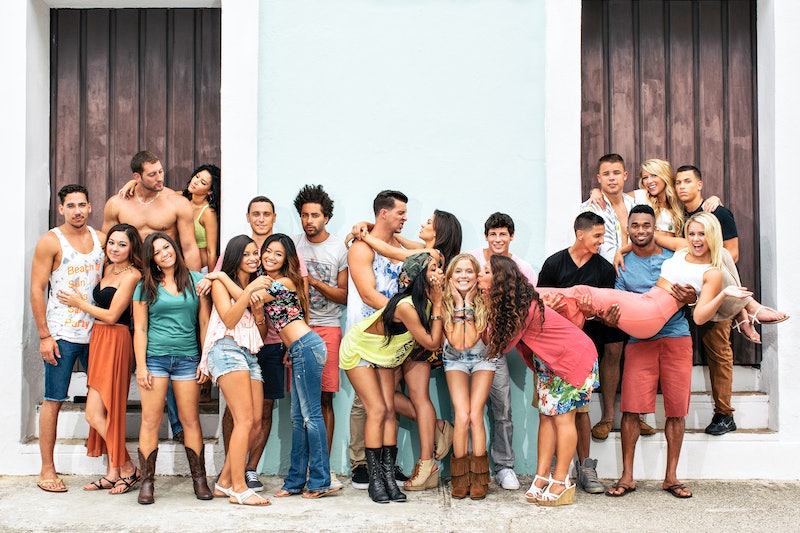 Dating and finding love is not easy, no matter who you are. But the cast of this MTV hookup show takes the complications of modern relationships to a whole new level. The premise of Are You the One? promises "the most ambitious matchmaking experiment ever attempted." Well, if by "ambitious" they mean "kind of sleazy," they're not wrong. Are You the One? brings 20 singles (10 guys and 10 girls) to a tropical locale, and promises them that, among this group, their "perfect match" is waiting. If each person finds their correct match by the end of the show, they'll all get to split $1 million. But there's a catch, of course: every person on this show is, by their own admission, terrible at relationships. They continually mess up their chances at finding love in the real world, so they've all come to a reality show for help. What could possibly go wrong?

Turns out, pretty much everything. If the first season of Are You the One? — which aired from January to March of this year — is anything to go by, none of these people should be encouraged to enter into emotional attachments with other human beings until they get their own stuff figured out. Based on just the promo below, Season 2 will also include a lot of crying, a lot of yelling, and a lot of awkward hookups—all the classic signs of an MTV reality program. Things get even more cringey this season, because one lucky guy has two perfect matches in the group — meaning one girl could find her ideal dude... and still go home with no one. Which actually seems quite cruel to me.

So how does this show work, exactly? Its format is surprisingly complicated to follow, which is why I've broken it down for you into five easy steps.

Step 1. The Cast Meets and Mingles

Being told that your "perfect match" could be one out of the 10 people standing in front of you would put a lot of pressure on anybody. And the way the cast dealt with that stress last season was to begin drinking and hooking up immediately. Did I mention that there is a specific room (equipped with just one large bed) that the show refers to as "Pound Town"? I'll just let that sink in.

To win one-on-one dates with their potential matches, the guys and girls compete in weekly competitions, which usually reward whoever's willing to show the most skin. Each episode, while the winner(s) and their chosen match(es) are out getting to know each other, the rest of the group votes to decide which couple will enter the "Truth Booth."

Once they get back from their date, the chosen couple goes to the Truth Booth, which is basically a futuristic looking shack the size of a porta potty. Inside, a screen reveals if the couple is a match or not. This is where the central flaw of Are You the One? is most obvious. Most couples go into the booth expecting that they are correctly matched. They feel an attraction and a connection, which is why the rest of the group voted to test their match potential in the first place. But most of the time, they find out they actually aren't meant to be, at least according to the show's personality tests and computerized data crunching. So who's correct: the people experiencing these feelings or the hard numbers?

Step 4. Love is a Mystery

At the end of each episode, the entire cast comes together to guess everyone's match. Remember, if they guess all 10 couples correctly, they get to split a million bucks. Alternating weeks, the guys or the girls, one at a time each pick who they believe their match to be. (That means, if someone picks your match before you, you're out of luck.) After everyone chooses, it is revealed how many of the matches are correct—but not who the correct matches are. It's like a logic puzzle... except no one on this show acts particularly logically.

I know, I know: how could these couples not stay together forever?! I thought they all found their perfect match!? At the conclusion of Season 1, all 20 people were paired off correctly, and they each received their cut of the million dollars. BUT, by the reunion special, just one couple remained intact. Doesn't lose all hope though. That one couple, Amber and Ethan, are now married and have a baby on the way. See? It worked!

More like this
Miriam Haart & Girlfriend Nathalie May Have Broken Up After 'My Unorthodox Life'
By Brad Witter
Robert Brotherton's Boyfriend Ra'ed Saade Competed On Several Reality Shows
By Brad Witter
We’ve Got A Text! Another 'Love Island' Series Is On The Way
By Darshita Goyal
Why Wasn't Teddi At The 'Bachelor In Paradise' Reunion?
By Brad Witter
Get Even More From Bustle — Sign Up For The Newsletter