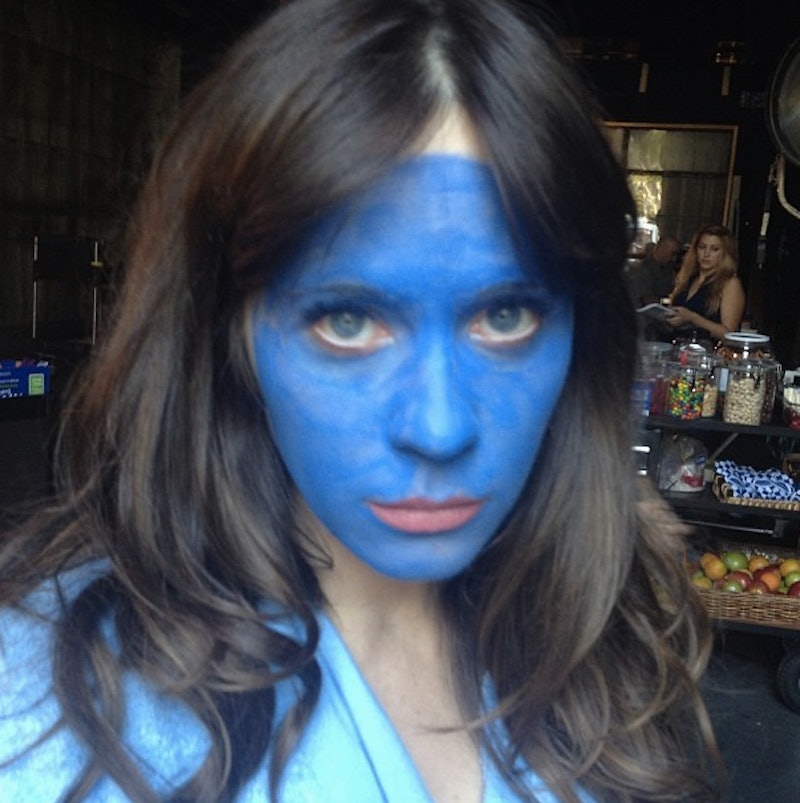 Ever since I first started watching New Girl, I thought there was something missing. I couldn't quite figure out what it was, but now, I've finally realized: Smurfs. Just kidding, that would be completely bizarre on any TV show for grown-ups ... except maybe Community. But that doesn't mean it won't happen. Zooey Deschanel posted a picture to her personal Tumblr of her face covered in bright blue makeup (below). The caption reads, "Weird job..."

Deschanel has two main jobs, playing Jess on New Girl, and being the "she" half of band She & Him. It's doubtful that she would cover herself in blue paint to sing, so New Girl is probably what she's referring to.

So will there be some sort of Smurfs episode in Season 3? Where Jess and her roommates all dress up like the tiny blue creatures for some reason? I'm sure Schmidt would refuse to put any kind of toxin like bright blue paint on his face — it's reserved for ridiculously overpriced skincare products. Maybe Jess will have to don the blue for some event at the school where she was hired as a teacher towards the end of Season 2. Or it could be some kind of strange, strange role playing with Nick.

Then again, it could have nothing to do with New Girl. Deschanel may have been trying to be a Smurf just like her look-alike Katy Perry, who voiced Smurfette in The Smurfs and its sequel. Just in case, look out for any signs of paint during New Girl's Season 3. Things might get weird.

More like this
Taylor Swift Visited The 'Glee' Set For This Bizarre Season 5 Episode
By Grace Wehniainen
Linda Ronstadt’s “Long Long Time” Plays A Pivotal Role In The Last Of Us
By Brad Witter
'Wednesday' Star Emma Myers Thinks A Wenclair Storyline Is “Possible” In Season 2
By Alyssa Lapid
'The Crown' Season 6 Has Suspended Filming "Out Of Respect" For The Queen's Death
By Bustle Staff
Get Even More From Bustle — Sign Up For The Newsletter
From hair trends to relationship advice, our daily newsletter has everything you need to sound like a person who’s on TikTok, even if you aren’t.