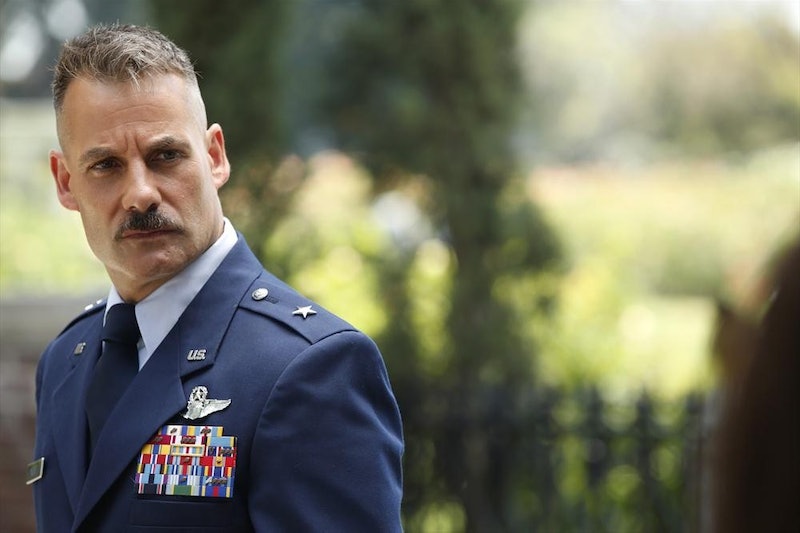 In a very welcomed return to television, Heroes and Political Animals star Adrian Pasdar plays General Talbot on Marvel's Agents of S.H.I.E.L.D. He first apepared last season, where he was almost completely unrecognizable with a buzzcut and a killer 'stache. He's also a man on a mission, and he wants to stop what remains of the S.H.I.E.L.D. agents. He appears to be a good guy willing to cooperate with other good guys, but what happens if he turns out to be pretending to be a good guy, and is actually secretly a bad guy? (Ahem, Ward.) I mean, his actions so far are a little suspicious. Looking back on the Marvel comics, just who is General Talbot?

Talbot makes his first appearance at the end of the first season immediately after Hydra has taken down S.H.I.E.L.D. After patching through a line to the UN, Coulson finds Talbot on the other end. Still at the HUB, Talbot tells the team to remain there, because he's coming for them. Coulson has other ideas, and flees the HUB for the Providence base, leaving Talbot to track them down. Clearly Coulson's a good guy, and Talbot is a good guy, but they're two different sides of the same coin and just cannot see eye to eye. As we saw in last week's episode, Coulson doesn't have any sort of beef with Talbot, and is even willing to help him if he leaves the rouge agents alone. While this sounds like a pretty good idea, it might not be the best idea Coulson's ever had. Why? Well, Talbot's comic origin isn't necessarily rooted in a whole lot of good.

Talbot is known in the comics as that guy who is always trying to track down Bruce Banner, aka the Hulk. Though, at the time he doesn't realize that Bruce Banner is the Hulk, and instead has him pegged as a traitor. He's also on a quest to track him, because Talbot happens to be in love with Betty Ross — who's in love with Banner. Talbot wanted to warn Betty of the dangers of Banner, and it mostly worked, because the two of them were married. However, it didn't last for long, and Betty divorced Talbot and went back to Bruce.

YEAH, HE REALLY HATES THE HULK

After the end of his marriage to Betty, Talbot swore vengeance on the Hulk, stole a battle ship (the War Wagon), and followed the Hulk to Japan, which would ultimately lead to his death. The two duked it out next to a volcano and the Hulk got so pissed at Talbot for shooting him with sonic beams that he caused the volcano erupt. This fried the War Wagon's system, caused it to crash, and Talbot was killed in the process.

But, Talbot has reappeared and could do the same again. He was presumed to be alive after he appeared on TV in a comic, but it turns out he was just a fancy hologram (Marvel calls them, Life Model Decoys, or LMDs.).

Then, he was a ghost, of course. He rose from the grave to help Hulk and Betty fight the villainous Chaos King. Because, why not?

HIS S.H.I.E.L.D. CHARACTER WILL PROBABLY MIRROR THE COMICS

Even though we've never seen Hulk on S.H.I.E.L.D., Talbot's actions are sort of the same. He's a good guy, but he's also hunting down the good guys. I could easily see him meeting the same fate on TV, but for different reasons. Talbot seems to be a very stubborn man of his word and I wouldn't at all be surprised if he gives his life in the line of duty. Sure, he might hate Coulson and his motley crew, but he's always going to do what's best for his country above all else, and that means taking down Hydra.

The character has clearly stepped away from its comic roots, though, since there's no sign of Hulk popping in anytime soon, and Talbot is married to someone else and has a child. However, the tough-guy essence remains, and I can see Talbot continuing to be a pain in S.H.I.E.L.D.'s ass for a little while longer.