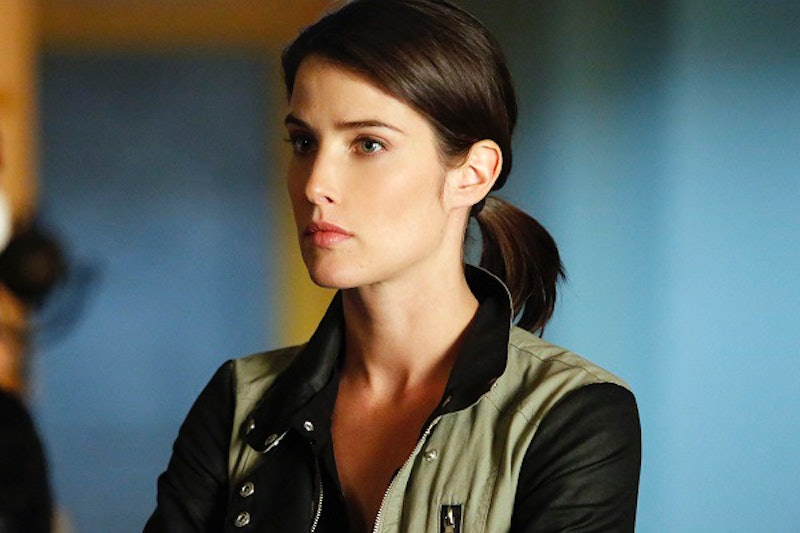 Ted Mosby may have finally met, married, and lost the Mother, but just because CBS' How I Met Your Mother is now a piece of television history doesn't mean Cobie Smulders has faded from public consciousness. If anything, she's become more popular than ever, thanks to the box office smash that is Captain America: The Winter Soldier. The latest product of the pop culture machine that is the Marvel Cinematic Universe featured Smulders back in action as S.H.I.E.L.D. agent Maria Hill. And now, following the success of that superhero sequel, Smulders will be making her second appearance on ABC's spinoff action series, Marvel's Agents Of S.H.I.E.L.D.

Her character was first introduced in 2012's The Avengers, as a high-ranking agent valued for her clear-headedness and unwavering loyalty to the shadowy organization. Agent Hill made her first appearance on Agents of S.H.I.E.L.D. in the show's pilot, when she interviewed Agent Ward to recruit him for Coulson's top secret "Level 7" team. That interview led to this now-classic exchange:

Hill: And what does that mean to you?

Ward: It means someone really wanted our initials to spell out S.H.I.E.L.D.

Smulders' participation in the show's first episode was largely a token reference to the MCU, a tie-in meant to help audiences connect the events of the series to the films. Thankfully, it looks like Agent Hill's second outing on the show will be a bit more integral to the plot — and we couldn't be more excited. But the question remains: can she be trusted? Let's analyze the clues.

Just when there's no one left to trust, Agent Maria Hill returns to team up with Coulson as S.H.I.E.L.D. is being destroyed around them.

Great! Hill is teaming up with Coulson & Co., presumably to help them escape the clutches of both HYDRA and the United States government (which sent Talbott to take over the remaining S.H.I.E.L.D. bases). Everything's peachy, right? Not so fast.

If Hill is helping Coulson, then why in the promo for the episode is she seen marching into the base with U.S. armed forces in tow? The episode is called "Nothing Personal," which sounds like something you would say to a friend right before stabbing them in the back. Did Hill lead Talbott straight to Coulson's team?

But then there's this picture from the episode:

Okay, now we're really confused. Did she betray Coulson or not? Hopefully this hug is a sign that everything's fine between the two S.H.I.E.L.D. agents, but there's just too many signs indicating otherwise for us to feel at ease. After all, this hug could come before her betrayal. Or it could be a flashback to their time together at S.H.I.E.L.D. before the hostile HYDRA takeover. Either way, something fishy is going on with Hill this week and we won't be sure what she's up to until we see the episode ourselves.

Whatever happens in "Nothing Personal," it's clear that Maria Hill has a big part in it. And now that Smulders is done with How I Met Your Mother, could we be seeing an increased presence from her no-nonsense agent? Perhaps a promotion to series regular for Season 2? That's probably wishful thinking — it would be understandable if Smulders were hesitant to commit to yet another series so soon after wrapping 208 episodes of Mother — but it would be fun to see her pop up on S.H.I.E.L.D. with more frequency.

Formulate your own theories about what Smulders will be up to in this episode by watching this action-packed promo on a loop: