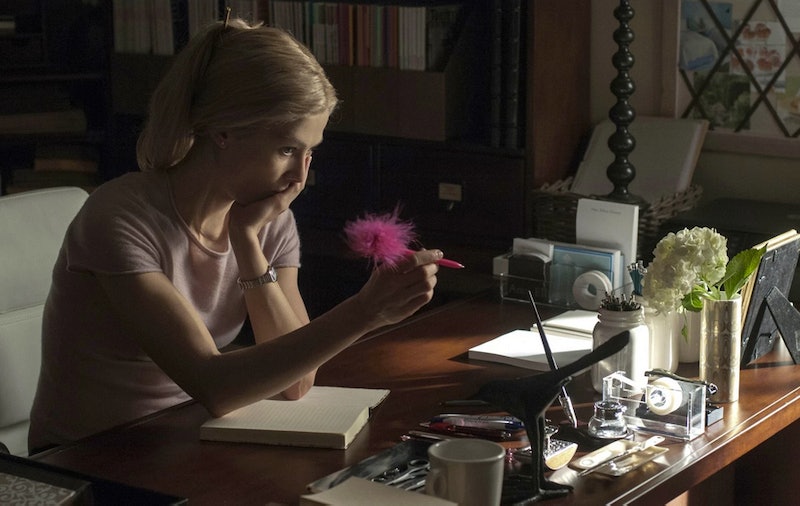 Gone Girl is not a movie that avoids a complicated relationship with womankind. And yet women have spoken, at least this opening weekend, about what kind of movies they're interested in seeing: In this case that'd be both Gone Girl and Annabelle . And they've spoken loudly: Women were the majority ticket-buyers for the openings of both films. It's getting harder and harder every day for major studios to pretend that women aren't just as formidable — if not more formidable — a force in deciding what gets to be a hit.

Annabelle and Gone Girl took the first and second places in the box office tops their first weekend out of the gate, with the former's audience made up of 51 percent women and Gone Girl bringing in a viewership of 60 percent women. Those movies brought in $38 million and $37.2 million respectively — what Variety calls "among the best October debuts in history" — so those stats have the money on their side as well.

Gone Girl is for sure a co-starring effort between Ben Affleck and Rosamund Pike, with both called upon to do some pretty heavy lifting and walk a few very tricky lines. Take Pike away as a central, dynamic figure in the story and...well, you wouldn't have a story. As for Annabelle, that's one I haven't personally seen, but a peek at the movie's IMDb billings tell me two out of the three main characters in that film are female.

Of course, women won't only go see movies starring other women — we've been around long enough to be used to dude-dominated blockbusters — but it doesn't hurt. Meaty roles for actresses have been proving time and time again over years and years that they are more than capable of making all the money Hollywood dreams of, and it's box office weekends like this one that should stand as evidence enough that the age of women having to prove we've "earned" their place needs to have ended a long time ago.