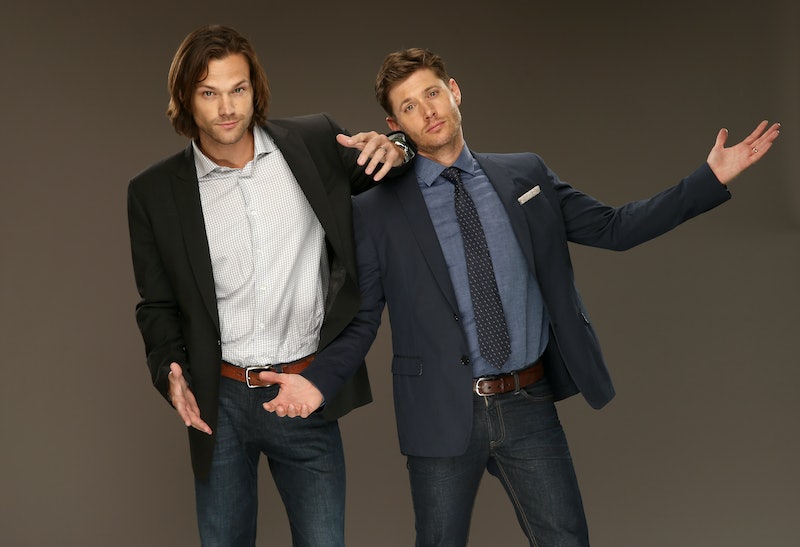 On The CW's hit series Supernatural , Jensen Ackles and Jared Padalecki play ghost-and-ghoul-fighting brothers Dean and Sam Winchester. They've always been bonded together by blood and the skills their father taught them to fight evil when they were younger. Now as mystery-solving adults, the brotherly love is strong and they've made a fantastic team taking down evil forces together for nine seasons, with Season 10 premiering on Oct. 7. But does such a strong bond between brothers transfer off-screen to the two handsome (and unrelated) actors who play them? You bet it does. Ackles and Padalecki are really good friends in real life — so good that they were once roommates and were even in each others' weddings.

It's so great to see two co-stars getting along so fabulously — and for so long too. The two Supernatural stars are often seen hugging it out, goofing around, and having each others' backs. Both of them also happen to be from the great state of Texas — Ackles is from Dallas, and Paladecki is from San Antonio. With that in common, Ackles and Padalecki said in several interviews they clicked the instant that they met for the show — and they've been inseparable since. Let's take a look at all the ways this bromance has grown to be as epic as the bond between Supernatural's own Winchester brothers.

Once Supernatural brought Ackles and Padalecki together in 2005, the duo became instant buddies. Before long, the guys were living together. They've seen their friendship as a crucial part of Supernatural's long-lasting success. "The most important thing I've learned from working with Jared is how crucial chemistry is for something to be successful in this industry," Ackles told Zap2It about his bond with Padalecki. "I think if the two lead actors — whether it's brothers, or a husband and wife — if they don't have chemistry, then it's not going to work. Good friendship and solidarity has been a crucial aspect of our success."

But the bachelor bliss only lasted for a little while — Ackles and Padalecki soon got married to their now lovely wives. The bromance didn't end there, though.

Although their bachelor days were done, the two actors celebrated their wedded bliss together, too. They were groomsmen in each others weddings — Ackles wed One Tree Hill actress Danneel Harris in 2010 and Padalecki married Supernatural co-star Genevieve Cortese that same year. Both co-stars even became fathers around the same time too. Ackles has a daughter with Harris and Padalecki has two sons with wife Cortese.

And So Much More

Earlier this year, Padalecki was there when Ackles finally signed up for Twitter. And at the 2014 Summer TCA Press Tour, Padalecki said, "I would be doing it a disservice to try to put into words what I've been through with Jensen. We've more than grown up together. We went from single 20-somethings to fathers, husbands, and it's hard to quantify in a few short sentences exactly what all that encompasses."

Padalecki and Ackles even get together to watch Supernatural, the show they already spend months shooting together. Now that's commitment to friendship.