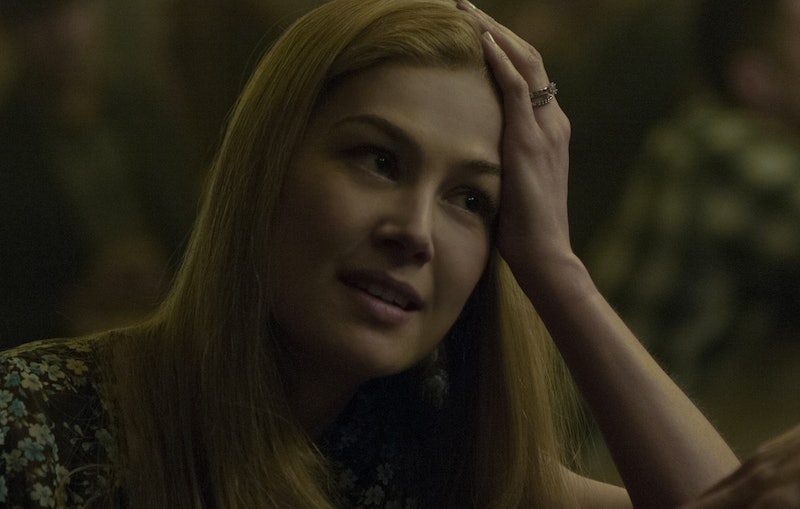 We can talk all we want to about Annabelle's box office success, but it's clear what movie was more pervasively on the mind of audiences all over the states its opening weekend. That'd be Gone Girl , for sure the buzziest movie of late. So now that we're already buzzing — and oh that chatter is destined to be cast far and wide — we might as well clear something up for a few people. [Yes, this is about to be filled with spoilers] Some people are puzzled as to how one Mrs. Amy Elliott-Dunne (Rosamund Pike) wound up pregnant in the Gone Girl 's final moments, considering she and husband Nick Dunne (Ben Affleck) hadn't sexed each other up in quite a while.

Yes, in one of the last scenes of David Fincher's directorial take on Gillian Flynn's novel and screenplay, Amy nips Nick's plans to reveal the truth about her in the bud with news that she's pregnant. Though in the novel Nick and Amy do have sexual relations after she returns from her... time away, in the movie that is not the case, and not every movie goer is paying laser-close attention to act-two details that don't seem relevant once everything else in the narrative has hit the fan.

The seeds of this (pun intended) were planted way back in act two — when the "news" of Amy's initial (faked) pregnancy is circulating and Nick's telling Margo about the semen sample he'd given to a fertility clinic when he and Amy were initially trying to conceive. Nick got a letter from the clinic after Amy changed her mind about having a baby that said they were about to throw out his sample unless he or his wife claimed it. Amy did indeed claim it, saving it for a rainy day when she could use it to extort her husband into staying with her for another 18 years. She then inseminated herself with it, and voila! The most terrifying child ever was on its way to existence.