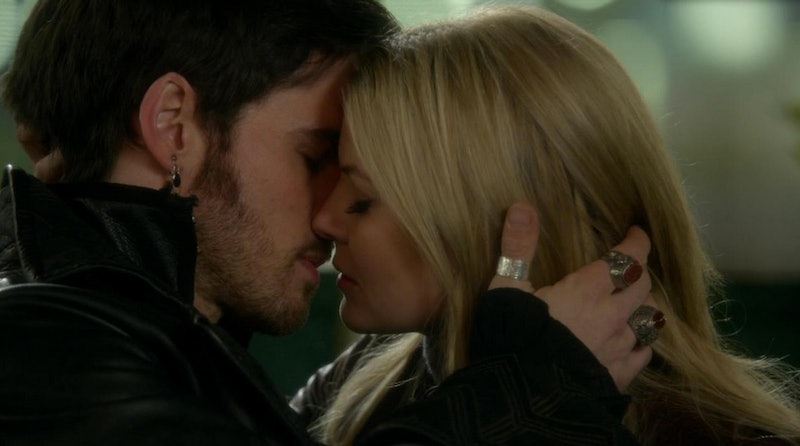 Rest easy, Captain Swan 'shippers, because this 'ship hasn't sunk yet. Even if this magical pair hasn't even had a real first date yet. Hook and Emma are still together on Once Upon A Time Season 4, even though Elsa almost made her freeze to death on Sunday night. We already knew from the Season 4 premiere that Hook and Emma were watching Netflix, ordering take-out, and being perfectly normal. But it was nice to see them playfully chatting during Sunday night's new episode, "White Out." It was also nice to know that Emma picked a good egg, because Captain Hook is totally a feminist.

That awkward moment when David aka Charming asked Hook about his "intentions" with his daughter finally came on Sunday night. And, thankfully, Captain Hook had a perfect answer for why he's the right guy for Emma. Obviously OUAT fans get why Charming would be weary of his daughter dating the gorgeous, eyeliner-wearing pirate ladykiller. (Not an actual killer, obviously you know that.) But that's not who Hook is anymore, people, and Emma's in good hands. Want to know why?

Hook is a total feminist these days, even though he has a rocky past with women. When Charming revealed a little skepticism about Hook dating his daughter, the pirate assured him that contrary to his past behavior, he doesn't see Emma as "loot" for him to acquire. Which is a good thing, because Emma isn't an object to be won, stolen, used, or owned. She's a strong, independent woman who could absolutely kick Hook's ass if he even tried to objectify her and she deserves to be loved. So, basically, OUAT just told us that Captain Swan is a team that's built to last. Even if they still have never had a first date — unless you count getting chased by that snow monster in the OUAT Season 4 premiere a first date.

And apparently Hook does, because he loves Emma that much that he's cool with them taking the unconventional route of dating. Long live Captain Swan.