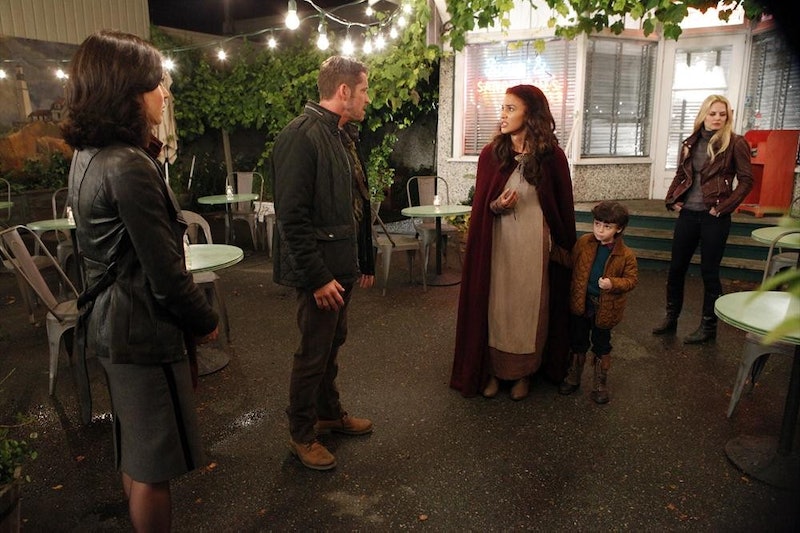 We went to so many realms and encountered so many curses on during Season 3 of Once Upon a Time that even if you are an avid fan, it helps to refresh. Over the past three seasons we've been to Neverland, Wonderland, and Portland. This season, we'll be going to new places and meeting even more characters. So before we avalanche into Frozen territory, let's take a look back at what happened to Emma Swan and her fairytale friends last year.

The first half of the season took our heroes and villains to Neverland to #SaveHenry from an Evil Peter Pan. Emma, Snow, and Charming were joined by Rumple, Hook, and Regina. The team was a little bit Avengers, a little bit The Breakfast Club. They eventually met up with Neal/Baelfire after a stint in the Enchanted Forest with Robin Hood and Mulan, where he almost convinced her to admit her feelings for Aurora. Gah! Mulan should commiserate over coffee with Regina (or me), who also chickened out when presented with the opportunity to meet her soulmate thanks to Tinkerbell. We also met Ariel, Rapunzel, and Lumiere! Never forget, John and Michael Darling held Ariel and Belle hostage! So long, childhood.

Eventually, the A Team returned to Storybrooke. Pan and Henry did the old body switcheroo and cursed the town again, but he was destroyed. To escape this curse, Regina had to destroy Storybrooke, bust everyone out, and give up the thing she loved most: her son. Emma and Henry drove off to New York with new memories. The second half of the season took place one year later and dealt with Oz. First, Hook retrieved Emma. They discover that the Wicked Witch of the West had arrived with a revenge kick and more family baggage. Neal died, for real this time. He sacrificed himself to save his father. Pity. Here are the rest of the season's highlights, including the game-changing finale.

Part One: Trouble in Neverland

The Father Who Never Grew Up

If you though Peter Pan being a villain was twisty, this had to be OUAT's weirdest family tree addition yet. Turns out, Pan is Rumplestiltskin's pops. The two of them ran away to Neverland together, and Dearie Old Dad decided he was way too cool for fatherhood or responsibilities or walking and transformed himself into a ruthless Pan.

Prince David Nolan-Charming was poisoned with Nightshade and almost DIED?! Say it ain't so! Zachary Levi didn't take a role in Thor 2 for Charming to die! Thankfully, with the help of his daughter's suitor, Charming managed to escape certain death AND certain banishment in Neverland. There was magic involved. Snow and Charming's relationship was tested with a few white lies. What's important is this: Charming owes Rumple a favor. Fantastic.

Jennifer Morrison is one of those actresses who has chemistry with everybody, so I don't find myself shipping Emma Swan with anyone over anyone else. However, as a huge Pirates of the Caribbean fan (let's pretend that prequel didn't happen), I am obsessed with the fact that one of her romantic interests is Hook. We learned this year that Killian Jones was once in the Royal Navy of... the Enchanted Forest? It's unclear which King he served. After Neverland took his brother and his idealism, he turned to piracy. As for Emma? It took some time in the woods for Miss Swan to risk giving her heart to anyone again. Even then, she wasn't so sure. She was focused on Henry, and still hurting from Neal's betrayal. Give it some time, Hook.

Part Two: My Sister in Oz

The Lost Year in the Enchanted Forest

The gang arrives back in Storybrooke with two things: no memory of the past year, and an odd desire to incorporate green into their wardrobe. Seriously. If you get a chance to re-watch, be on the lookout for that. Actually, Snow/Mary Margaret returned to Storybrooke with a third thing: a baby in her belly. Flashbacks reveal that when they arrived in the Enchanted Forest, the Wicked Witch of the West had taken up residence in the Evil Queen's palace. Hook goes off on his own with the ultimate goal of returning to Emma. The others learn how to defeat the Wicked Witch and were cursed back to Storybrooke. Oh, and Charming almost died again. What's important to remember is this: Snow and Charming now literally share a heart. Fantastic.

A New Witch in Storybrooke

Gather 'round, munchkins, as I tell you the story of Zelena. Remember Cora? The Miller's Daughter who seduced Rumplestiltskin, became a Princess, and ruthlessly groomed her daughter Regina to be Queen? Then became the Queen of Hearts in Wonderland? Well, add Teen Mom to her long list of credentials. Tricked by a commoner pretending to be a prince, Cora had a baby out of wedlock and sent that baby off to another land in shame. The baby was Zelena. The other land? Oz. When Zelena found out Regina had the life that should have been hers, she started to turn literally green with envy. So she set off to change the past. The spell requires courage, brains, and a heart (get it?) from Storybrooke residents. With Regina and Rumplestiltskin both compromised, the only way to stop her is Emma's light magic.

Don't sit under the apple tree with anyone else but me!

Not everything was doom and gloom. Regina found love again with Robin Hood. They bantered at first, as you would expect a career criminal and privileged royalty to do, but their bond was undeniable. He has a son, Roland, who could use a mother. Thanks to the power of sleeves, Regina didn't know this was the man predicted to be her soulmate until after they'd gotten close. He had the lion tattoo on his arm that Tinkerbell's magic had seen.

In other romantic news, Rumplestiltskin got married! Problem: he immediately lied to Belle by giving her a fake Dark One dagger, letting her believe she had control over him. He then used the real dagger to murder Zelena. Deceit and murder — what a solid foundation for a marriage!

Emma was having second thoughts about staying in Storybrooke, and Henry thought his book would help her remember how important her family was. He sent Hook after her. As a result, Hook and Emma got sucked through Zelena's time portal. Because they were thinking of Snow and Charming's classic story, Hook and Emma landed in the Enchanted Forest at the exact moment of her parent's first encounter. What do you know? They effed it up.

With a little help from Rumplestiltskin (the Doc Brown of Fairy Tales), the two managed to set the future back on track. But they didn't leave the past empty-handed. Emma befriended a girl who was set for execution, and brought her to Storybrooke. What harm could she do in another realm, right? Wrong. That girl was Maid Marian, Robin's wife and the mother of his child. Looks like Robin is in trouble, and Regina is pissed!

Whether or not Hook and Emma caused other tiny changes to the timeline of these characters remains to be seen. They did bring back a bottle... what was in it? I don't remember. Some frosty blonde — I think she was an architect or something.