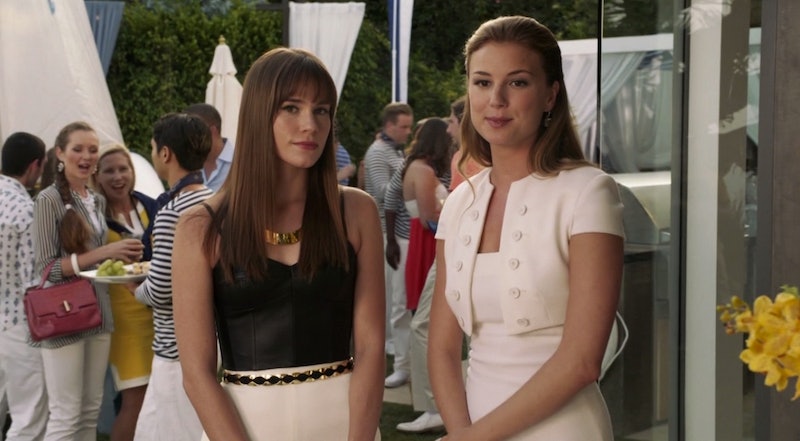 Did anyone expect this to go well? At all? After Nolan threatened to out Emily for being Amanda Clarke during the Revenge Season 4 premiere, Emily took matters into her own hands. On Sunday night's new episode, "Disclosure," Emily told Charlotte that they're sisters and that she is, in fact, Amanda Clarke. And, naturally, Charlotte didn't take that well, because Revenge has had the youngest Grayson (or would it be Clarke these days?) go entirely off the rails. Actually, she took it so badly that Charlotte tried to kill Emily on Revenge. So, I guess she's really not in the market for new family?

Honestly, I can't really blame Charlotte for not wanting anything to do with Emily. She might have apologized for kidnapping Charlotte and tormenting her in Season 3, but that just wasn't good enough. Emily hasn't held back when it's come to her younger, half-sister ever on Revenge and it's been pretty screwed up. And Charlotte reiterated what Victoria said during last Sunday's premiere, Emily chose revenge over a relationship with her sister and she can't take that back. I'm assuming that wasn't the reaction Emily expected to get from her obviously unhinged sister who contemplated throwing herself off the roof of a house earlier in the episode. Sorry, Emily, you just can't go home sometimes.

Emily tried to plead with Charlotte and explain that she'd done this for their father, you know, the very much alive David Clarke. But that didn't go so well either when Charlotte basically said, you chose a dead man over a relationship with the only family you have that's alive. #Burn — and I mean that literally. After storming out of Emily's house, Charlotte called her and asked her to come out to Jack's bar to talk. Emily went and Charlotte knocked her out before setting the bar on fire and leaving her there to burn. I know what you're thinking, this is a pretty violent way to react to finding out you have a new sister. Most people just stomp their feet and slam their doors, right?

Well, apparently that's not how Charlotte Grayson plans to handle this. And she definitely doesn't plan on having a girls' night to bond over their dear, old dad with Emily anytime soon. I guess you really can't quit the revenge life once it's chosen you.