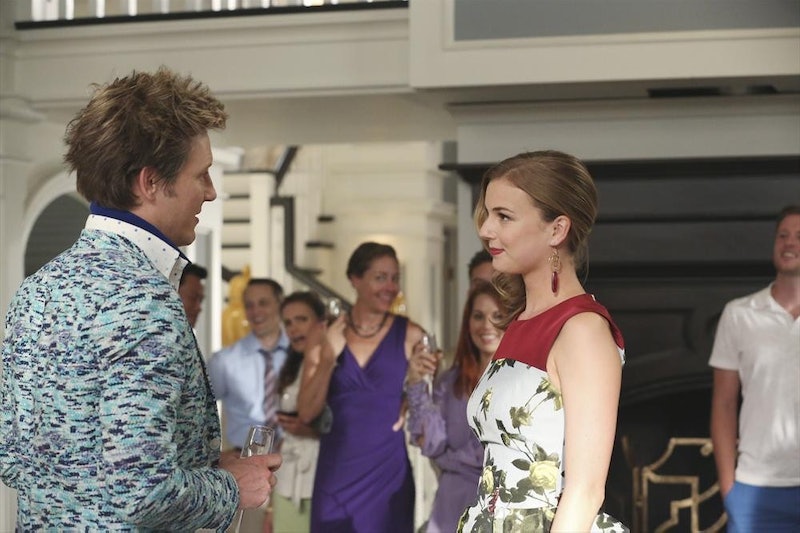 What are friends for if it's not to administer tough love when necessary? And that's exactly what Nolan did for Emily on the Revenge Season 4 premiere because Emily just can't let revenge go. On Sunday night's premiere episode, "Renaissance," Emily threw a coming out party of sorts for herself and her new home at Grayson Manor. But it was really just the same, old Emily that came out to join the Hamptons social crowd and Nolan, being the great BFF that he is, totally called her out on it. Nolan threatened to outout Emily on the Revenge Season 4 premiere, but was he ever planning on really doing it? Or just scaring his friend into making that call on her own?

It really was a kind of sad night for Emily Thorne — which might be the understatement of the year since she's clearly still mourning the death of Aiden and the fact that she kidnapped Charlotte and scared the sanity right out of her. But, even though I'm a firm believer in the fact that Emily brought her misfortunes on herself by not knowing when to quit, it was painful to listen to her say that she couldn't quit revenge because she had nothing to go back to because of all the revenge she's gotten over the past three seasons. Was that a mouthful? Well, Revenge is a confusing show, so keep up.

The Season 4 premiere, "Renaissance," made it seem like it'd created a whole new Emily — a whole new Emily that wanted to drive Nolan's car, be "happy," and throw a lavish, totally asshole-y Hamptons bash at her new home. But really, this new Emily just decided that if she had to give up getting revenge for herself, she was going to get it for other people — like Valerie, the innocent woman whose car she hit and became her latest project. Emily staged an accident to invite Valerie to her party so she could out some rich Hamptons jerk for killing her fiancé in a boating accident, thinking she'd be thanked wholeheartedly. Well, Emily's plan was a flop and she just ended up causing Valerie more harm than good, which was clearly meant to be a commentary on all of the revenge she'd executed so far in David Clarke's honor.

So, naturally, Nolan called her out for being addicted to the revengenda and threatened to out her for being Amanda Clarke if she didn't give it a rest and try to move on. Because if he doesn't do it, no one will and, of course, Emily denied being addicted because she just doesn't have a life outside of Emily Thorne so she can't give her up. (Bullshit.) But, after seeing the preview for next Sunday's new episode, it made me wonder if Nolan actually would've outed her at all, or if he just knows Emily so well that he knew she'd make the right choice if put under the right pressure.

Next Sunday, according to the preview, Emily will reveal her identity to Charlotte and, subsequently, reveal that they're sisters. So, whether or not Nolan actually planned to out Emily, at least he forced her to share the details about her identity with someone that really matters and who could really use her right now. Thanks to Nolan, Emily's finally on the road to recovery. Now all Revenge needs to do is NOT kill him and we might actually have something going on here.