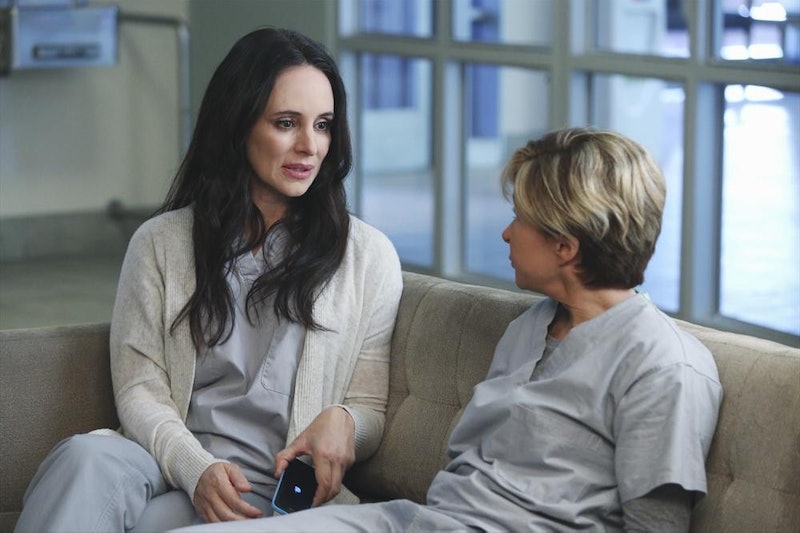 Well, this is awkward — like, really, really awkward. Which is just something else when it comes to ABC's Revenge. I guess living in a tomb for 10 years will keep you a little out of touch. During the Revenge Season 4 premiere, Victoria Grayson escaped from the insane asylum and it surprised no one. I mean, Season 4 is about her, after all. But it was surprising when David Clarke abducted Victoria outside of Emily's new house. And on Sunday night's new episode of Revenge , "Disclosure," David Clarke revealed that he still loves Victoria and that's why he abducted her and things subsequently got super weird. So, will he shave his creepy, I'm-on-the-run beard now?

Just when you thought things on Revenge couldn't get anymore weird, right? Well, they can and they do and they absolutely will in Season 4. Because aside from the fact that David Clarke's hidden the fact that he's alive for 10 YEARS, now he's proclaiming his love for the woman who forced him into a life of solitude in the first place? God, these Clarkes are all screwed up. But, I mean, no one actually believed that David would kill Victoria like he admitted to killing Conrad on Sunday night. Right? You've been watching Revenge for way too long to believe that nonsense. So, get ready for this twisted reunion.

So, Victoria obviously tries to escape at first after David accuses her of turning on him and ruining his life and then David takes her to his "grave," which is more like a tomb, where he's been living for the past 10 years. It's terrifying — all the way down to the undressed cot he's been sleeping on (#thestruggle). And then David professes his love for her, which, HELLO, is totally awkward considering he looked like he was about to choke her to death a few hours before. WTF are you trying to pull, David Clarke?

Then he launches into this whole ideal he's cooked up that he, Victoria, and Charlotte are going to be a family because he can protect Charlotte like he couldn't protect Amanda. And Revenge fans are in for the biggest shock of their lives with this one — DAVID THINKS EMILY IS DEAD. Basically, he saw the story about the fake Amanda dying and he has no idea that the real Amanda became Emily Thorne. So, David's under the impression that his daughter is dead and all he has left is Victoria and Charlotte. That's the perfect reason to start a new family, right? Apparently, if you live in the Hamptons.

And this sounds like a great idea, once Victoria decides to not stab David with a steak knife (make good choices, girl). But Revenge isn't going to let David's reunion with the "love of his life" and his other daughter go well because in the final moments of "Disclosure," Victoria uses David's confusion about Amanda to her advantage — to turn him against Emily. Which is just ridiculous because one look at Emily and David will know that she's his daughter, right? It's been 10 years, but a father can't just forget that, can he?

David might not want to kill Victoria right now, because he believed her lies about not throwing him under the bus, but he's absolutely going to kill her when he finds out that she's been leading him, blindly, into conspiring against his firstborn daughter. But really, what I want to know from all of this is how David Clarke just stayed in a tomb for 10 years without trying to find Emily. That is just such poor planning that he doesn't even deserve a second chance with Charlotte, that poor girl's had enough drama.